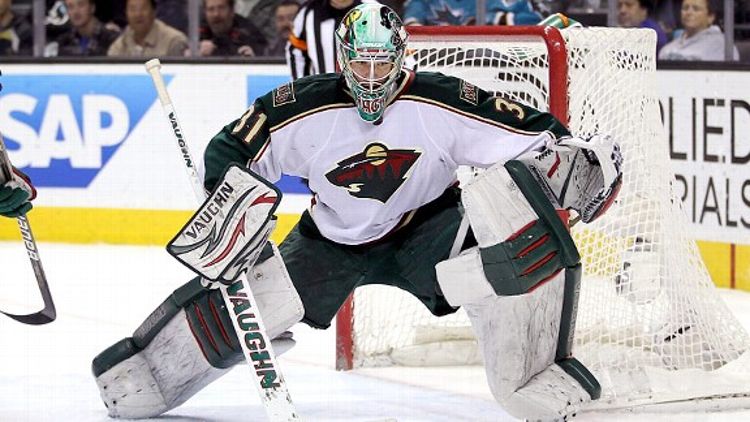 Two weeks ago, the Minnesota Wild came thisclose to having a 51-year old embroidery store owner named Paul Deutsch suit up as an emergency backup goalie. The Wild’s top guy, Niklas Backstrom, was scratched late on game day, Josh Harding would be starting in net — and it wasn’t clear whether the team’s preferred backup guy, 21-year-old Matt Hackett of the AHL’s Houston Aeros, would be able to make it to the game in time.

Hackett showed up at the last minute, allowing Deutsch to bow out and watch the game from a less nerve-wracking spot — a private suite with his daughter’s under-14 girls hockey team, of which he is coach. (Actually, I take that back. That spot sounds equally nerve-wracking.) It didn’t matter anyway — Harding played the whole game, picking up the win over Nashville. Hackett returned to Houston two days later.

With Backstrom nursing an injured groin, Hackett was called up to Minnesota again to back up Harding. On Sunday, two days before the Wild were headed to California to play the Sharks on Tuesday night and the Kings on Thursday, Hackett spoke of his excitement to be a part of the NHL team, even if from the bench. “I’m 21 years old; I’m a goalie,” he told the Pioneer Press. “I’m here to back up Hards and cheer him on, and whatever happens, happens.”

Just over a minute into Tuesday’s game, Harding’s teammate Nick Schultz collided awkwardly with his goaltender, snapping his neck back. And so Hackett found himself in his first NHL game, in the loud environs of San Jose’s “Shark Tank,” facing a team for whom his uncle Jeff once played several seasons in goal. (The younger Hackett was only a baby then.) San Jose broadcaster Drew Remenda couldn’t help but be charmed by the young goaltender’s unfamiliar player photo, chuckling that he had a lot of hair product going on.

With his team playing spirited defense in front of him to help clear rebounds and sweep away pucks, Hackett had the kind of night that young goalies only imagine: a win with 34 saves. Even beneath his goalie mask after the game, you could see that he was shaking and couldn’t stop smiling. His teammates were equally ecstatic. Many of them knew him well, having played together on last season’s Houston Aeros squad that made it to the Calder Cup Finals — led by Wild coach Mike Yeo, now an early contender for the NHL’s coach of the year in his own rookie season behind the bench in Minnesota.

“Last year Matt was a key fixture for our team as we advanced in to the Calder Cup Finals,” Yeo told Fox Sports. “He has played in tight games, overtime games and game sevens, and he has always been able to rise to the occasion.”

On Thursday, Hackett got his first NHL start, with Harding still sidelined with a sore neck. As if to prove that his debut wasn’t a fluke, he stopped 42 shots on the night, not allowing a goal until 3:59 into the third period. For the first time in franchise history, the Wild swept their California trip. A shutout, two wins, and an NHL record — not bad for a few days in the life of a 21-year-old kid.

Other goalie news from the past week:

Loved this poke check and rebound save by Calgary’s Miikka Kiprusoff. (Johan Hedberg and Jonathan Quick also had some ballsy moves in a shootout and defending a breakaway, respectively.)

Ondrej Pavelec has won his last three starts for the Winnipeg Jets, including a 1-0 shutout against the Phoenix Coyotes. He’s averaged more than 30 saves per game during the stretch, while allowing just three goals against. He earned the First Star of the game in the Jets’ 2-1 win over Boston on Tuesday night, holding off a furious Bruins attack in the game’s final minutes and finishing the game with 39 saves. Pavelec is, to this point, perhaps most widely known for his collapse on the ice in a 2010 game between the Atlanta Thrashers and Washington Capitals. But if he keeps up his strong play, particularly in Winnipeg’s frenzied arena, this could truly be his breakout year.

The conventional wisdom going into the season was that the Washington Capitals had made out like bandits by picking up Tomas Vokoun in a good-value one-year deal while shipping out Semyon Varlamov to Colorado in exchange for two draft picks. Varlamov has played well for the Avalanche, while Vokoun has struggled along with the rest of his teammates since getting off to a hot start. On Monday, he was benched in favor of Michal Neuvirth in a game against the Florida Panthers, his former team. “Those are decisions coach makes,” he said. “I’m a paid employee and I don’t make those kind of decisions.” While Vokoun won his subsequent start against Ottawa on Wednesday, it’s still harrowing to hear your starting goalie refer to himself like he’s punching the time clock at Initech.

In a strange statistical quirk, the Carolina Hurricanes’ Mike Murphy earned a loss Tuesday night in his NHL debut — despite stopping the only two shots he faced after having replaced starter Cam Ward, who had given up six goals on 32 shots during the game and was much more deserving of the loser L.

The NHL.com’s description of this video is: “Old School Never Gets Old: Martin Brodeur goes to the vintage double-pad stack for two stops on the speedy Phil Kessel.” How can you not want to click?

The first stage of any good goaltender controversy is the team’s vehement insistence that such a controversy does not exist. I kid, but the Chicago Blackhawks of all teams are particularly sensitive to the suggestion. The team has a recent history of backups taking over for starters. Last year Corey Crawford unseated Marty Turco to earn the starting role, and now he finds himself on the hot (or, more accurately, lukewarm) seat: Ray Emery got the start Thursday night, his third consecutive look, and earned a 3-2 win over the Islanders. (He lost 4-3 in a shootout to Phoenix on Monday and was in net for a 5-2 win over St. Louis this weekend.) “Razor” has quite a career path. He was a Stanley Cup finalist, but also a rumored drug user. He was maligned for his “dismal work ethic” and he was a finalist last year for the NHL’s Bill Masterson Trophy, which honors “perseverance, sportsmanship, and dedication to hockey.” This was in recognition for his comeback from a condition called avascular necrosis (the one that ended Bo Jackson’s career) that necessitated a major bone graft procedure. This year, he fought in training camp to make the Blackhawks roster; however this (non) controversy plays out, it’s certainly helping showcase a remarkable story.

Let’s end on this video of Marc-Andre Fleury with some Tiger Woods-style stickwork. No, not like that, you sicko.

Rays Continue To Play 'Let's Make A Deal' With Its Prospects