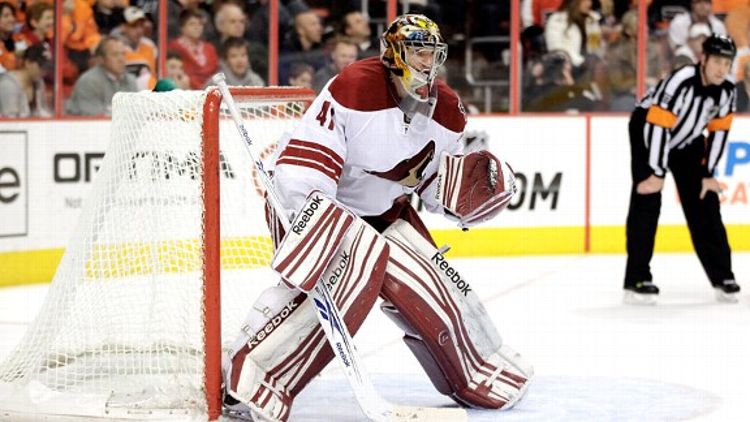 Less than a week before the beginning of the season, an article about the Phoenix Coyotes in the Arizona Republic had this to say about the team’s personnel in net: “Mike Smith, who calls parts of his game ‘a work in progress,’ will be in goal when the Coyotes open the regular season Saturday night at San Jose.”

It wasn’t exactly a rousing outlook for the Coyotes, who lost their starting goaltender, Vezina Trophy candidate Ilya Bryzgalov, in the summer to the far richer Philadelphia Flyers. The Coyotes, who are currently owned by the league and may not be long for Phoenix unless a new buyer can be located, instead inked former Tampa Bay and Dallas backup Mike Smith to a far thriftier two-year, $4-million contract than the nine-year, $51-million deal Bryzgalov ultimately wrung out of Philly.

The team was widely expected to suffer in Bryzgalov’s absence, despite head coach Dave Tippett’s conservative, goalie-friendly system. Instead, they stand at a respectable 9-5-3 record, good for seventh overall in the Western Conference; Smith, meanwhile, has better stats in just about every category — wins, save percentage, goals against average — than his predecessor does with the Flyers this season. (Here’s a graphical depiction of the numbers.)

What’s more, in the days leading up to Thursday night’s head-to-head game between Bryzgalov’s former and current teams, several Coyotes players made it clear they weren’t feeling too many pangs of longing for Bryzgalov. “I’m glad he’s gone because the guy we brought in has done a great job and fit in real well, made our team even closer,” defenseman Derek Morris told Coyotes broadcaster Todd Walsh. “There was some animosity there with Bryz sometimes.” Another defenseman, Adrian Aucoin, responded “absolutely” when Walsh asked him if the description of animosity was true. Still, neither player was really suggesting that Bryzgalov is some sort of a bad dude. He just fits the loony goaltender archetype more closely than Smith.

Thursday night’s game between Phoenix and Philadelphia lived up to its billing: the two teams were held scoreless through the first period and into the second, and the game was tied at 1-1 until Philadelphia’s Matt Read buried a rebound past Smith with just 18.6 seconds to play in regulation for a 2-1 Flyers win. Bryzgalov, the game’s first star, made 30 saves, while Mike Smith stopped 40 shots and was given third star recognition.

And while it was a satisfying win for Bryzgalov, Smith more than held his own. It’s likely, as the season shakes out, that things will stack up similarly to last night’s game; Smith has struggled throughout his career with his consistency, and while he’s working closely with respected Phoenix goalie coach (and former NHLer) Sean Burke, it’s impossible to predict how successful he may be. Burke told Yahoo!s Nick Cotsonika that “I really think that Mike Smith is capable of being a top-10 goalie, just the way Bryz was.”

Smith originally went to Phoenix to get more money than the Tampa Bay Lightning were able to offer him after they resigned starter Dwayne Roloson to a one-year, $3 million contract. At 42 years old, Roloson is the oldest player in the NHL (and the only 1960s baby remaining); he is older than even his own coach, Guy Boucher. After joining the Lightning last year at the trade deadline, Roloson was excellent in net, and while his play has been a bit more up and down this season, he dominated in net Thursday night, recording a 33-save 4-1 win over the Pittsburgh Penguins that was less than five minutes away from becoming a shutout and included this stretching second-period save on Evgeni Malkin.

Minnesota Wild netminder Niklas Backstrom did pull off a shutout, blanking the Colorado Avalanche for his second of the season. Backstrom, in conjunction with goalie Josh Harding, has helped bring the surprising Wild to first place in the Northwest Division with an 11-5-3 record. The duo has putt up strong enough numbers to overcome the fact that the Wild have the fourth-worst goals-for average in the NHL.

Since inking a seven-year, $49 million contract on Nov. 3, the Nashville Predators’ Pekka Rinne has sparkled. (His only loss came in overtime to Montreal.) In the Preds’ last two games against the Capitals and the Maple Leafs he’s let in only one goal apiece, making 39 and 38 saves respectively. (Speaking of Rinne and his contract, this was an interesting statistical read about how Rinne’s contract and play will compare with other goalies. Whether you agree or not, the last line is devastating.)

Standing in for a concussed Ryan Miller, Buffalo’s Jhonas Enroth dropped his first game in the entire 2011 calendar year — a 5-3 loss to the New Jersey Devils on Wednesday, stopping only 14 shots. Before that sad showing, the backup goalie had gone 13-0-1 since January 1. On the other end of the ice, Martin Brodeur made one of the week’s most athletic stops.

The streaky play of the Detroit Red Wings may have rubbed off on Jimmy Howard Thursday night, as the goaltender let in four goals on 17 shots in the Red Wings’ 5-2 loss to the San Jose Sharks. Prior to that, though, Howard had been enjoying some of his best play of the season. A 24-save shutout against the Edmonton Oilers last Friday earned him his third-straight win and tied him with Rinne and Jonathan Quick for league lead with three shutouts. Howard was named the NHL’s Second Star of the Week. In 14 starts he has posted a 1.90 goals against average and .933 save percentage, earning eight wins.

And finally, a shoutout to one of the wiliest goaltenders in the league: the empty net. With the puck on his stick just a few feet away from a wide open goalmouth, the Nashville Predators’ Craig Smith, who leads all NHL rookies in scoring, stared into the abyss — and then proceeded to miss the net completely. I’ve never seen anyone munch more furiously on a mouthguard in shame.

Previously from Katie Baker:
Broadway Blueshirts Are Becoming Must-See Theatre
Manning-ology, Lady Byng, and the Pitfalls of Great Free Tickets
The Best Team in the NHL