Get Lucky and Don’t Screw Up: The Secret to the Atlanta Braves’ Success 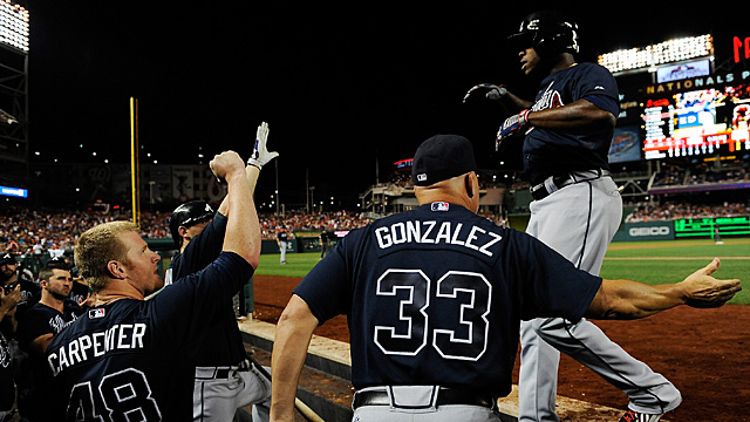 The Atlanta Braves are suddenly on an 11-game win streak, 13½ games up on their nearest division rival. How in the world did that happen?

In a way, the 2013 Braves are an extension of their 15-year run of National League dominance, an achievement the likes of which we’ll probably never see again. Anyone who rooted for another NL East team near the turn of the century probably quivers with anger at the memory of an Atlanta team that was almost perfectly constructed to dispassionately steamroll all comers, year in and year out. It was an awesome sight to behold, or it would’ve been if I hadn’t been angry enough that my eyes were bleeding while it was going on.

Books have been written on the success of the Cardinals, A’s, and Rays, and could be written on what the Pirates and Astros are doing now. But the Braves’ dynasty wasn’t about swimming against the current or seeking out every small advantage — it came together almost by accident, but once it had, it was a master class in avoiding the fatal mistake.

You can’t count on drafting two future Hall of Famers in the span of a couple years, but the Braves fell into Tom Glavine and Chipper Jones. You can’t count on adding a third Hall of Famer in an unremarkable trade, and yet John Smoltz–for–Doyle Alexander happened. And sure, signing the best pitcher in the league to a big free-agent contract is a pretty safe move, but nobody could have foreseen Greg Maddux winning the Cy Young in each of his first three years in Atlanta.

Acquiring and developing these players took skill as well as luck, but it’s not all that uncommon for a team like this to come together. What set those Braves apart is that once that team came together, it never stayed completely static. General manager John Schuerholz assembled the best starting rotation of all time and was unafraid to let any piece go when the time was right. Maddux, Glavine, Smoltz, Steve Avery, Kevin Millwood, and Denny Neagle were all cashiered when better value could be had. None of the team’s signature position players — Ron Gant, Ryan Klesko, Terry Pendleton, Fred McGriff, Andruw Jones, Javy Lopez, Jeff Blauser — got the kind of contract (except Chipper Jones, who hit like one of the five best third basemen of all time until the very end) that leaves the Phillies annually on the hook for $25 million of largely ineffective Ryan Howard, or saddles the Yankees with (at least at the moment) a $45 million left side of the infield that’s played a combined six games in 2013.

The Braves never spent big money on a closer, rolling over relief aces year to year and turning young guys who threw hard into 30-save men five years before Billy Beane made it cool.

This was made possible by a relentless stream of homegrown players, many of whom came from Georgia, the Carolinas, and northern Florida. Blauser became Rafael Furcal, Marquis Grissom became Andruw Jones, and Lopez (not immediately, but eventually) became Brian McCann.

Schuerholz didn’t win so consistently because he bet big and won. He just made a series of small moves, most of which paid off, and he avoided the killer mistake. And while the current Braves are under new leadership, Frank Wren’s team is largely built the same way.

Wren pounced on Justin Upton, Dan Uggla, and Jordan Walden in trades when all were undervalued. Andrelton Simmons is probably the best defender in the game, but there was no guarantee he’d hit even as well as he has in the major leagues. Kris Medlen pitched way over his head last year. Evan Gattis is a Disney movie character who fell into the Braves’ lap. And Chris Johnson, a throw-in in the Upton trade, is leading the National League in batting average, which might be the most ridiculous stroke of all.

Buy local and build from within

The Braves sit in the middle of a hotbed of amateur baseball, and they own it, as is borne out by their extraordinary hit rate on high draft picks. Simmons was drafted out of a junior college in Oklahoma and Medlen and Freddie Freeman came from California. But many players were drafted by the Braves in the third round or higher from a school in Georgia or a state that abuts it: McCann, Mike Minor, Jason Heyward, Alex Wood, Craig Kimbrel, and Jordan Schafer.

The Braves have actually had a lot of things go poorly, especially in recent years, from two key bullpen arms blowing out earlier this year to Heyward and B.J. Upton struggling mightily this season. But there’s always a solution, and the organization is never hesitant to go to it when things go bad. When shortstop prospect Tyler Pastornicky cratered last season, in stepped Simmons. When Tommy Hanson was used up, Wren dumped him for Walden. By refusing to throw good money after bad, Wren has avoided the fatal wound and the Braves are in line for their third playoff appearance in four years while their would-be competition, the Phillies and Nationals, have soiled their proverbial beds.

It’s a methodical, unsentimental, not-particularly-innovative approach. But it works.