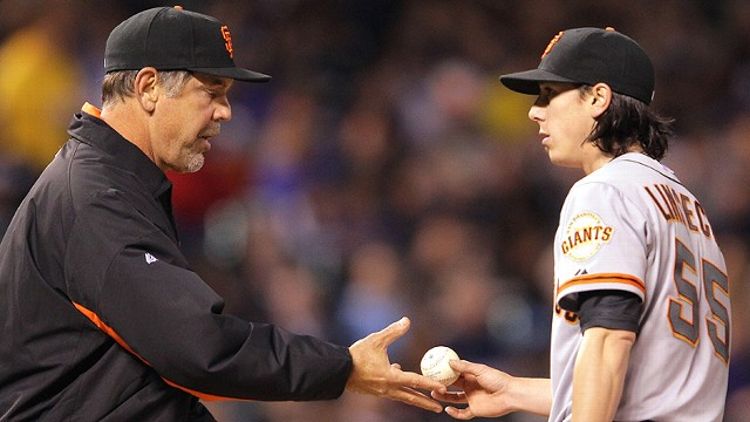 That’s the question some freaked-out Giants fans were left asking after Wednesday night’s debacle at Coors Field. Lincecum surrendered six runs on eight hits, didn’t make it out of the third inning, and started a chain reaction that ended in a 17-8 annihilation by the Rockies. Two shaky starts into the season, sitting on a 12.91 ERA, maybe this would be the year he’d finally lose it.

If it feels like we’ve been fretting over Lincecum forever now, it’s because we have. Pitching for his hometown Washington Huskies, Lincecum absolutely obliterated college baseball, putting up video game numbers in the box score and on the radar gun. If he were built like a stereotypical pitching ace, there’s a good chance he would have gone no. 1 overall in the 2006 draft. But Lincecum was no Roger Clemens. At 5-foot-11 and a buck-sixty-something coming out of college, there were fears his body wouldn’t stand up to the rigors of major league pitching. Yes, he generated incredible torque and velocity from his pitching motion, earning him the nickname “The Freak.” But skeptics wondered if that forceful delivery might one day turn from a blessing to a curse — one that would eventually wreck his arm and derail his career. So Lincecum went 10th overall that year, behind future stars Evan Longoria and Clayton Kershaw … and also Greg Reynolds, Brad Lincoln, and Billy Rowell.

Less than a year after being drafted, Lincecum cracked the Giants rotation. He excelled from the start. The Freak wielded a fastball that averaged 94 mph but touched the high 90s. He threw a nasty curve and a wipeout changeup that no one could touch when he was on — which was nearly all the time. Less than a year after hitting keggers in the U District, Lincecum was striking out more than a batter per inning in the big leagues. The next season, Lincecum grew into one of the most dominant pitchers the game had seen in years. He led the National League in strikeouts (265), FIP (2.62), and Wins Above Replacement (7.5), mixing in an occasional filthy slider with his three core pitches. In his first full season, he won his first Cy Young. For a little while, the murmurs stopped.

Then Lincecum got whacked for seven runs and 14 hits over his first two starts of 2009, lasting just 8⅓ innings combined in those two games. That’s when Lincecum Panic first gained steam. On April 17 of that year, AOL’s Jeff Fletcher wrote an article declaring, “Tim Lincecum Feeling Good Again.” It seems that two bad starts were enough to cause consternation among Giants fans, and also in Lincecum himself. Turns out he was having trouble with his landing foot, something he noticed after studying film. You could say the analysis helped. In his next two starts, Lincecum tossed 16 innings, allowed 10 hits, one walk, and one run, and racked up 25 strikeouts. He destroyed the league from then on, leading the NL for the second straight year in strikeouts, FIP, and WAR and capturing his second straight Cy Young.

In a weird way, Lincecum’s dominance only heightened the scrutiny over his size (slight), his delivery (Freakish), and his persona (surfer dudeish). There was some just cause. His average fastball dropped from 94-plus at the start of his career to just about 91 mph in 2010. His home run and hit rates spiked, and his strikeout rate edged (slightly) lower. He was still one of the game’s best pitchers, just maybe not the best. In 2011, same story: lots of strikeouts, lots of success … just not quite the fire-breathing out machine who gave hitters nightmares months before they rolled into town.

The facts did not quite square with the narrative, though. The following is a small sample of Lincecum headlines during the 2010 and 2011 seasons:

For as much fear as Lincecum has triggered with his various slumps, some of the loudest cries for help are happening right now. The Giants’ (former?) ace had already announced he was junking his slider to take strain off his arm. True to his word, he didn’t throw a single one in his first start of the year against Arizona.

Then came last night’s implosion. The excellent pitching analysis site BrooksBaseball.net has all the gory details, including Lincecum’s two- and four-seam fastballs both averaging just 91 mph. The bigger problem, though, was his location. Watching from a soggy Coors Field, you could see Lincecum repeatedly struggle to hit his spots, making Hector Sanchez slide dramatically to his left and right in an attempt to catch his pitcher’s errant offerings. Problem was, too many of them never made it into his glove.

Here’s the problem with drawing any deeper meaning from those events, though: One bad night tells us next to nothing. Walter Johnson had starts where he missed badly. So did Sandy Koufax, Greg Maddux, and Pedro Martinez. Lincecum isn’t throwing as hard as he did as a wild-eyed rookie. But he hasn’t been that guy for a few years now, and he’s still put up strong results. The thing about pitchers is they tend to throw the hardest and strike out the most batters early in their careers, often in their early 20s. The best ones adjust, develop new pitches, hit their spots better, and pick up little tricks that help them not only extend their careers, but excel years after they’ve stopped throwing peak heat. Once an eight-win pitcher, Lincecum was roughly half that last season. Fixating on his velocity (assuming he’s not throwing 12-mph meatballs) isn’t instructive; it happens to the best of them, even when they’re young. For Lincecum to return to true elite status, he’ll need to locate a lot better than he did last night, pitching up, down, in, and out, changing speeds, and befuddling hitters the way a pitcher with a strong repertoire and a low-90s fastball can and should.

What’s wrong with Tim Lincecum? He might never again be The Freak. That doesn’t mean he won’t ever again be great. Two starts to open the season didn’t erase that chance three years ago, and they haven’t now.

Other happenings from a wild night at Coors:

• I’m not a meteorologist or a physicist, but an unusually wet night in Denver coincided with the ball jumping off multiple players’ bats. This might’ve been a case of chronically horrible pitching … or maybe not. Banjo-hitting Giants shortstop Brandon Crawford had three homers in 70 career games prior to last night; he hit one out. Defense-first Giants outfield Nate Schierholtz has 18 homers in 1,121 career plate appearances prior to last night; he jacked two over the wall. In the fourth, Michael Cuddyer reached down for a low pitch and one-handed it … 380 feet, landing just short of the wall in right-center. Again, correlation might not equal causation given the night’s weird weather (including a biblical hail storm two hours before first pitch). But man, something was going on.

• Seventeen runs without a home run by the Rockies might sound unusual. But it’s nowhere close to a record. Baseball’s modern record for most runs scored without a homer was set by the Indians on July 7, 1923. They scored 27 runs that day. The all-time record dates back to July 22, 1876, when the Chicago White Stockings cashed 30 runs without a single homer. (Hat-tip to Comcast SportsNet Chicago’s Christopher Kamka for the deep data dive.)

• When Buster Posey was scratched from the lineup after an off-day, you had to wonder if something might be amiss. Turned out he was sidelined with a case of the shingles. Do not Google “shingles photos.” You’ve been warned.

• Speaking of unfortunate bodily events, Lincecum sheared several inches of hair off his Mitch Kramer look before the game. Forget velocity, location, or anything else. Maybe Tim Lincecum is Samson.

• The game ended with Tyler Chatwood notching a three-inning save. The guy who preserved a nine-run victory for his team got the same credit that a pitcher would in the ninth, up one, striking out the side with the bases loaded. Proof positive that the save is the dumbest stat in baseball.

• Finally, we have an early candidate for the most preposterous play of the 2012 season. It would be fruitless to try to verbally explain what happened. Just know that the crowd — flush with Giants fans as well as home team rooters — alternately gasped, shrieked, and cracked up laughing as the play unfolded, and that Jon Miller had a golden opportunity to top his Ruben Rivera call for the ages.

So now, for your viewing pleasure, I present … the Coors Calamity.