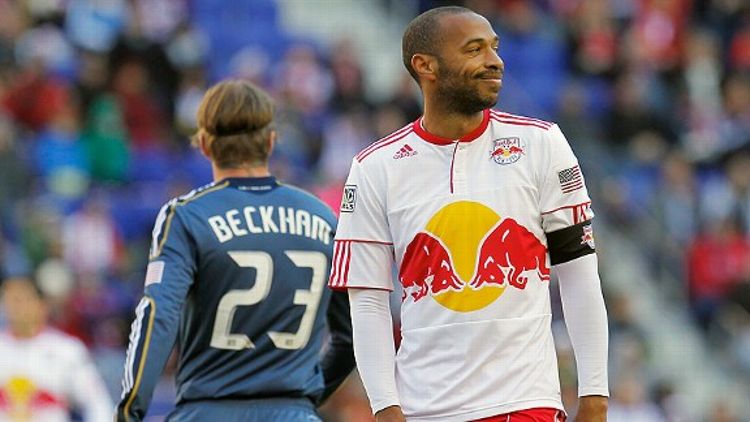 The return leg of the Western Conference semifinal playoff series between the New York Red Bulls and Los Angeles Galaxy is easily the most interesting game that will be played in the history of the league (11 pm EST, ESPN2). I know you might be tired of hearing that case being made for every single game that David Beckham has been involved in, but this time it might actually be true. The match-up involves the league’s richest teams, the most famous players, and the biggest television markets. The story lines behind the game make it just about the most compelling MLS game that a casual fan could finally decide to watch.

Major League Soccer is never must-see-tv for general American soccer fans. It’s not really about the perception of a ‘low quality of play’ as compared to top tier leagues, or the lack of familiarity with the majority of the players. Americans just watch individual soccer matches because they want to feel like they are watching something with ‘high stakes’, knowing that they aren’t going to miss an important moment.

Whether it’s Donovan versus Algeria or Lionel Messi in the Champion’s League final, the general American soccer fan needs a context for drama in an individual game. Let’s get real — the majority of Americans who identify as some one who says that they ‘follow soccer’ just click on viral goals and tune into the most mainstream match-ups between European superpowers. At this stage of the MLS’s history, most fans aren’t rooting for individual teams, but the idea of a relevant soccer league in America.

Landon Donovan described the New York Red Bull as the ‘cheapest team’ he’s ever played against. A highly bloggable altercation after the first game saw Rafa Marquez and LA Galaxy midfielder Juninho get red carded, even though Rafa Marquez came out looking like the real softy. Check out his cheap dodge ball throw at Donovan, then the majestic flop that follows.

Even if Los Angeles puts this game out of reach early (already up 1-0 on aggregate), it will still probably degenerate into a chippy game that sees some red cards and maddogging. There’s always something compelling about watching David Beckham and Thierry Henry go on ‘mean streaks’, which means they aggressively track back to win balls in the midfield. Their entire teams feed off the energy and watching their urgency takes the fan experience to another level.

The Galaxy had the best record in the league, but had to start their playoffs with a cross country flight to play against the Red Bull on a sloppy field the day after the first snowfall in the East. Then they get to fly back and play against the Red Bull just a few days later. Ignore the fact that a team from New York is in the Western Conference playoff bracket. Until the MLS rebrands the Americanized sporting concept of their ‘playoffs’ into some sort of tournament with a sweet-sounding trophy name, ‘international football purists’ will continue to have a problem with a system that isn’t THAT broken. Even if the matchup seems absurd, no one is really complaining because the two most relevant MLS franchises are meeting in the Playoffs.

The game will only be played in front of 15,000 fans on a college campus

As buzzworthy as Major League Soccer has been this season, there are still a few quirks in the young league that make you scratch your head. The Galaxy play at the Home Depot Center, which is on the campus of Cal-State Dominguez Hills. Due to an agreement with the school, the attendance tonight will be capped at 20,000 out of a potential 27,000 fans to reduce parking congestion for night school attendees. The atmosphere should still be electric, but it still seems frustrating to not be able to sell out the league’s marquee matchup.

Oh yeah, and this could be David Beckham’s last game in MLS…
Oh yeah, and both teams matchup pretty well against one another…
Oh yeah, and the Red Bull are prone to defensive lapses on set pieces that always provide for comedy…
Oh yeah, and you can watch and wonder why LA Galaxy defender Omar Gonzalez hasn’t been called into the US-MNT during Jurgen Klinsmann’s tenure, but Tim Ream has…
Oh yeah, and what else are you going to watch on a Thursday night during the NBA lockout?

While the MLS Playoffs have been pretty exciting as a whole so far, tonight’s game has more storylines that have transformed it into ‘the game that every one talks about’ the league wanting to happen, sort of like the Heat vs. the Lakers or a Yankees Vs. Red Sox matchup. Sure, Sporting Kansas City might be playing the most complete football right now, and more should have been made about the final game of Kasey Keller’s career, but for a casual fan, tonight’s game might be more relevant than even the MLS Cup.

Carles is the creator of the authentic content farm HIPSTER RUNOFF.