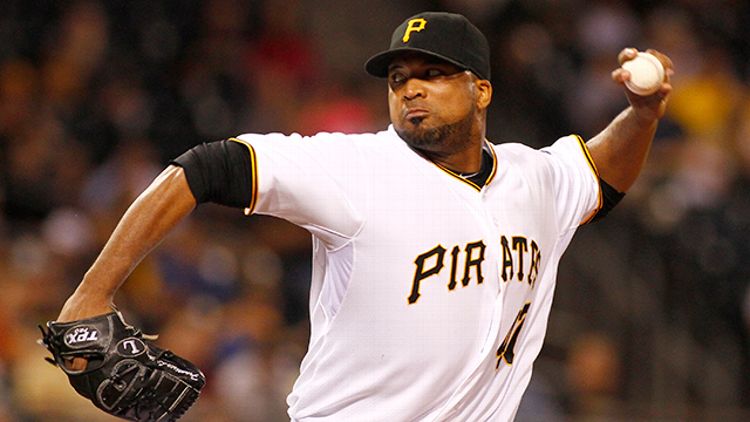 It’s easy to see the impact Francisco Liriano has had on the Pittsburgh Pirates this year. His 2.57 ERA ranks fourth-best among all pitchers with 130-plus innings pitched. He sits seventh in the National League in strikeout rate. If you’re one of those people who still notices win-loss record, he’s tied for the league lead with 15 wins (vs. just six losses), despite making seven or eight fewer starts than other pitchers with similar totals. Being the best pitcher on a Pirates team that’s about to break one of the longest losing streaks in sports — and maybe even make a run at the World Series — doesn’t hurt either.

Great stuff, all of it. But Liriano has something else going for him this season: He’s dominating left-handed hitters like no other lefty starter has in the history of baseball.

Using the excellent Baseball-Reference Play Index, Rany Jazayerli searched for the most effective left-handed pitchers against left-handed hitters in a season (minimum 100 at-bats), using OPS allowed. Here’s what he found:

*Randy Johnson limited left-handed hitters to a .331 OPS in 1999 in exactly 100 plate appearances. The Baseball-Reference query allowed AB and not PA to be used as a marker of playing time, which is why Liriano and not Johnson tops this list. At any rate, if you’re putting up basically identical numbers compared to the best left-handed pitcher of all time, that’s pretty good.

So what makes Liriano so unhittable if you’re a left-handed batter? It starts with his slider. According to the terrific pitching analytics site Brooks Baseball, lefty hitters are batting .068 against Liriano’s slider this year, with a .085 slugging average. When lefty batters swing at the pitch, they miss it 47 percent of the time. (These are not typos.)

Liriano’s other primary pitch is a sinking fastball. That pitch has induced plenty of whiffs, too, with a swing-and-miss rate of 24 percent. But the number that jumps out at you is the frequency with which the pitch triggers ground balls. This season, for every five times a lefty hitter has put Liriano’s sinker in play, more than four of those have been pounded into the turf for ground balls. If you’re the mathematical type, both of those results are two standard deviations above what other lefty pitchers have done against lefty hitters this year. If you’re not the mathematical type, these are “Holy effing crap!” numbers.

Liriano has faced 111 left-handed hitters this year, roughly the total number of hitters a good starting pitcher would face over four starts. We’re sample-size zealots here at Grantland, so any stats that spring out of the equivalent of four starts are bound to make us skeptical. But Liriano’s longer track record corroborates these lights-out numbers. Since 2006, Liriano has derived more value from his slider than any other pitcher except CC Sabathia and Ervin Santana. A study by John Walsh in The Hardball Times Baseball Annual 2008 (also cited briefly here) showed that the sinker and slider are the toughest pitches for a same-side batter to hit, thus creating the biggest platoon splits. In a nutshell, a right-handed hitter will have an easier time picking up the trajectory and break on a lefty pitcher’s slider than will a left-handed hitter. When you have a lefty whose slider can be described in technical terms as filth flarn filth, that platoon advantage can reach historic levels.

Pitchers like Liriano (or Randy Johnson) are so tough for lefties to hit that opposing managers barely bother leaving them in the lineup; Liriano has faced four times more right-handed hitters than left-handers this year, while righty hitters outnumbered lefties against Johnson nearly 11-to-1 in his off-the-charts 1999 campaign. That makes their numbers against lefty swingers even more impressive, since the ones teams dare to trot up there are likely to be elite hitters who should be able to stand in against anyone.

All of this sets up one of the postseason’s most intriguing matchup situations. With the Buccos likely headed to the playoffs, Liriano is a strong candidate to start in October, either as the go-to guy in a one-game wild-card playoff or as the no. 1 starter in the league division series (A.J. Burnett is the other top-of-the-rotation option). Say Pittsburgh faces the Reds at some point. Cincinnati’s three best hitters (by a mile) are lefties — Joey Votto, Shin-Soo Choo, and Jay Bruce. Between the overall quality of those three hitters, the Reds being low on obvious right-handed alternatives, and Dusty Baker being a creature of habit not exactly known for scratching out tactical advantages, all three figure to face Liriano when he pitches, giving the Pirates a big edge. If the Bucs face the Cardinals, 2013 monster breakout player Matt Carpenter could run into trouble against a same-sided pitcher like Liriano; Mike Matheny would likely bench lefty-swinging center fielder Jon Jay for Shane Robinson, though. Freddie Freeman, Jason Heyward, Brian McCann, Adrian Gonzalez, Carl Crawford, and Andre Ethier could all invite tough choices or severe platoon disadvantages depending on factors ranging from roster health to the preferences of Fredi Gonzalez and Don Mattingly.

The most logical course of action for any of these skippers facing the Pirates next month would be to take the extra roster spot freed up by not requiring a fifth starter and use it on an extra right-handed bat. And for those brave left-handed souls forced to step into the box against the Southpaw Slayer … prayer’s not a bad option.