Fourth-and-Short: The Eagles Can’t Help Themselves 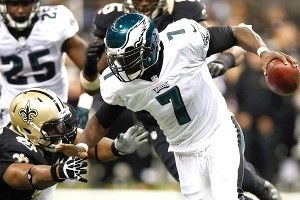 It’s not my goal to talk about the Eagles so frequently here at Grantland, but when they deliver a performance in prime time that is so distinctly, specifically … Eagles (as they did last night), well, I feel like there’s just too much to say about them to move onto other topics in Fourth-and-Short. They are car-crash football television, appointment viewing for fans motivated by Schadenfreude, and the ultimate viewing experience for your irritating uncle who watches the game and acts like he’s an expert on passing mechanics and decision-making.

While the game felt like a blowout for most of the contest, it essentially came down to one single play, the Patrick Robinson 99-yard pick-six at the end of the first quarter that served as the opening score. I’m fond of referring to those sort of goal-line-to-goal-line pick-sixes as the single worst play in sports, and it’s hard to think of a play that impacts scoring (and momentum) more. The pick-six there represents a swing of about 13 points, since a team with the ball on the goal line will score an average of right under six points (mostly touchdowns, with a few field goals and the occasional turnover mixed in), and the pick-six produces seven points for the opposition. You can’t simultaneously take away such a meaningful play for your own team and provide such a valuable scoring play for the opposition at the same time in any other sport; it would be like if you struck out with the bases loaded and somehow produced a grand slam for the opposing team in the process. In a game that was decided by a 14-point swing, Michael Vick’s pick-six was responsible for virtually the entire margin of victory.

Watch Out for Me, Andy

Another thing that makes the Single Worst Play in Sports so devastating is its relative scarcity. Turnovers in the red zone that produce touchdowns for the defense simply don’t happen very frequently. From 2007 to 2011, just 12 of the 214 turnovers (5.6 percent) that came on plays that began inside the opposition’s 10-yard line resulted in return touchdowns for the defense. Through the first nine weeks of the 2012 season, there have been 30 such turnovers, and two have been returned for touchdowns. Guess which offense was on the field for both of them? From 2007 to 2011, only one team (the Giants) had more than one turnover inside the opposition’s 10-yard line result in a touchdown return the other way; they had three in five years. In 2012, the Eagles have had two of those plays happen across a stretch of six games. That’s truly remarkable.

To be specific, the pick-six in the first quarter on Monday night cost the Eagles 11.8 points. Brian Burke’s calculator estimates that a team in Philadelphia’s situation at the time of the interception will score an average of 4.8 points on their drive, given the down and distance and game situation. Vick’s interception wiped those points off the board and gave the Saints seven free points on the touchdown return, producing that 11.8-point swing.

That got me to thinking: How many points have the Eagles lost on turnovers involving Vick this year? Every team will lose some percentage of their output to takeaways each season, but what would Philadelphia’s offense be like if Vick didn’t fumble or throw interceptions?

There’s never going to be a concrete answer to questions like these, but plugging the respective game-states for each Vick fumble or interception into Burke’s calculator, Philadelphia’s foregone about 35.2 points of offense by turning the ball over in the situations they have done so, which would be just under 21 percent of their total offensive output for the season if they never turned the ball over. When you add in the 21 points produced by the three return touchdowns (and extra points) created by the defense on those plays, the turnovers have cost Philly 56.1 points on the season. It’s enough to turn the Eagles and their NFC-worst minus-50 point differential into a respectable, above-average team.

And even that represents a friendly estimate, since it doesn’t include whatever improved field position the Eagles give to their opposition with their turnovers. The Eagles had left their defense with the league’s second-worst average starting field position through Week 8, something that is undoubtedly Juan Castillo’s fault.

In light of Philadelphia’s red zone fiascoes against the Saints, I wanted to take a look back and see if there was any sort of trend or tendency — beyond “they’re awful” — that I could use to diagnose Philly’s issues. So, with the help of the coaches’ tape on NFL Game Rewind, I went back and watched every red zone snap the Eagles have taken on offense this season. What I found was disappointing: There’s not one clear problem or easy solution from their red zone performance that I can throw out there as an obvious story line. (Here’s where I wish I hadn’t burned through my “It’s Juan Castillo’s fault” joke in the previous section.)

My sneaking suspicion was that the Eagles were leaving Vick in an empty backfield too frequently inside the red zone and it was creating problems, but that wasn’t the case. Before Monday night, the Eagles had lined up with Vick as the quarterback in an empty set four times inside the red zone, and those four plays had produced two touchdowns with one interception. Vick’s certainly been under heavy pressure in the red zone, and it’s affected his decision-making while creating both turnovers and narrow escapes of turnovers, but he’s been subject to that pressure in all kinds of formations and with six or even seven players in to block.

Take Arizona’s strip sack of Vick and return for a touchdown several weeks ago. Watch LeSean McCoy and what he does in pass protection on the play. It’s impossible to truly tell what the pass protection should have been on the play without the playbook next to the video, but on coaches’ film, it sure looks like the linemen fan right, which would leave McCoy to shoot out left and pick up a blitzer from the left side of the line (right side of the defense). Instead, at the snap, McCoy shoots out to the right, and Kerry Rhodes gets a free hit on Vick’s blind side. The play could alternately have been designed for Vick to read (and elude) any pressure from that side, but with Vick not even facing that direction after the snap, it seems unlikely. The Eagles can leave blockers in to protect Vick, but they have to do their job. Demetress Bell’s awful performance in the place of an injured Todd Herremans last night is further proof of that.

While plenty of folks seemed to call for the Eagles to lean more heavily on McCoy as a ballcarrier inside the red zone, the truth is that he really hasn’t been very effective there this season. How ineffective? McCoy has 17 rushing yards on 16 red zone carries this year, and you don’t need me to do the division there to tell you that’s bad. He’s scored just twice on those 17 touches, which is awful low for a guy who has three touchdowns on his six receptions. He’s also fumbled twice in the red zone this year, losing one of them. While you can shake a tree in Philly and find 10 people who will tell you Reid needs to run the ball more, I think Reid’s lack of confidence in his offensive line’s ability to create any push at the line of scrimmage in short-yardage is reflected in those numbers. The Eagles could and should have found a carry or two for him in the red zone on Monday, but it’s not like they were guaranteed to score touchdowns if they were just smart enough to hand him the ball and get out of the way.

If you’re looking for hope, there have been two plays that have worked well in the red zone for the Eagles, and I suspect that you’ll see them again soon in the coming weeks. One shows up toward the edges of the red zone, and it involves the Eagles running a two-man route with DeSean Jackson and Jeremy Maclin while leaving everyone else in to block as part of a max protect scheme for Vick. It worked for a touchdown against the Browns in Week 1 and then again against the Giants in Week 4. Philadelphia’s actually a reasonably effective team within those first 10 yards of the red zone; it’s the final 10 yards where they really struggle. Their best play within a few yards of the goal line has come on the rarely seen middle screen, a play-action pass that sees a receiver (in this case, McCoy or a tight end like Clay Harbor) block for a brief moment before turning to the quarterback and taking a short pass with blocking linemen in front of him. It’s a dangerous pass, since it travels through traffic by definition, but it can be effective. It’s gone for three completions this year, including a touchdown to McCoy against the Falcons.

So then, unfortunately, we’re left with a problem that’s more complex than simply running the ball more frequently, changing the quarterback, or chalking it all up to bad luck. It’s unlikely that the Eagles will commit the Single Worst Play in Sports again this season, but they’re also more prone to it than any other team because they get too sloppy in the red zone and don’t do a good job of protecting Vick. And even that’s just a guess, really. The only thing that’s truly clear about the Eagles’ red zone problem is that it’s costing them football games. Monday night’s loss was perhaps the clearest example of that yet.