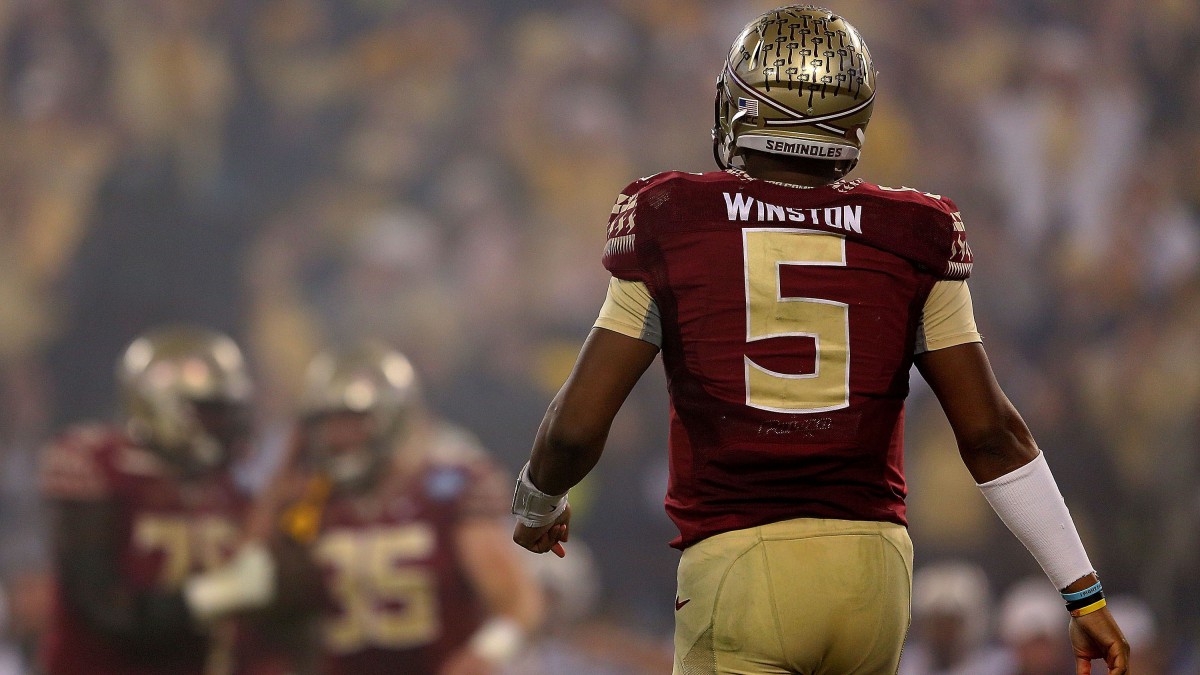 Before we get to the heart of things, let’s discuss for a moment the Heisman Trophy, and why we all would be better off if it were sunk to the bottom of the Mariana Trench. The Heisman Trophy is to be awarded every year to the best college player. In 2014, Amari Cooper of Alabama is the best college football player in the country by a country mile — even if that country is Azerbaijan, and the country miles are merely rocky landing strips for lonely vultures. However, because the Heisman Trophy is as weighted toward quarterbacks as a papal conclave is weighted toward cardinals, Marcus Mariota of Oregon won. Cooper finished a ridiculous third. I mention all of this because, in the opening round of the inaugural Cash Drop in college football this year, Mariota will go up against last year’s winner, the curiously unindicted Jameis Winston, who (I suspect) will lead the Tallahassee Conspiracy To Obstruct Justice to a whopping win that will make the Heisman voting this year look even worse. The CTOJ will then move on to the first national championship game of the playoff era. Win or lose, this will make the entire enterprise look worse than the Heisman Trophy does.

Ever since the beginning of this season, the New York Times has been on the yet-unfinished story of the sexual-assault complaint against Winston. But that really has been the least of it. The Times expanded its investigation into the insanely elevated place that Florida State football — and the people who play it — enjoys in the city of Tallahassee, which, it should be remembered, is the capital of the state of Florida. There is that popular Internet meme called “Florida Man.” This meme holds that any headline that begins “Florida man … ” is even odds to lead to an episode involving cocaine, whipped cream, pythons, and a central character who looks like someone who lives in his mother’s den that doubles as a drive-through daiquiri shop and meth lab. The Florida State football program has become the Florida Man of college sports. Any story that begins “A Florida State player … ” is liable to end almost anywhere except, remarkably, in jail.

The Times revelations make Tallahassee — and have we mentioned that this is the state capital? — sound as though everyone there woke up one morning to discover that Huey Long had been elected mayor of Hooterville and invited the Ostrogoths to take over the Shady Rest Hotel. As the Times put it, in that delicate way the Times has when confronted with the barbarians who live west and south of the Hudson River:

An examination by The New York Times of police and court records, along with interviews with crime witnesses, has found that, far from an aberration, the treatment of the Winston complaint was in keeping with the way the police on numerous occasions have soft-pedaled allegations of wrongdoing by Seminoles football players. From criminal mischief and motor-vehicle theft to domestic violence, arrests have been avoided, investigations have stalled and players have escaped serious consequences … What’s more, dozens of officers work second jobs directing traffic and providing security at home football games, and many express their devotion to the Seminoles on social media …

At least 13 football players have been implicated in a string of wild public shootouts with CO2-powered BB and pellet guns, causing thousands of dollars in property damage, endangering bystanders and eliciting a police response. Yet until the most recent case — a previously unreported shootout in June that caused such a commotion that a sheriff’s helicopter was called in to search for suspects — none of the episodes led to charges, even though elsewhere in Florida suspects as young as 12 have been arrested for doing the same things.

“Elsewhere in Florida,” hell. This stuff didn’t fly in Tombstone. They should change the name of Doak Campbell Stadium to the Tostitos O.K. Corral. The Times is careful to note, of course, that not every player on the team gets in on what apparently is the Your-First-Felony-Free program run by the local police. At least nine players have been arrested over the last three years, on charges ranging from sexual assault to being an accessory to a fatal shooting. A town’s got to have standards, after all. No being involved with killing dudes, unless you’re a starter, which is a mitigating factor, locally.

But the central character in the Times’s drama is Jameis Winston, and the central event in the Times’s drama is the allegation that Winston raped a woman in December 2012, and that the Tallahassee law enforcement community banded together and made an ensemble decision to abandon their duties. At least in Ferguson, Missouri, there was a pretense of a grand-jury investigation. Here, there was nothing. He’s in the first College Football Playoff in a couple of weeks and has a chance at winning consecutive titles. The first announcer who uses the word “adversity” in a sentence with Jameis Winston’s name should be run out of the profession and into a career selling tarantulas as oven mitts.

I distrust media frenzies almost as deeply as I distrust anything, because I’ve seen, in a craft I value, how easy it is to gin one up. That said, there is only one thing I distrust more, and it is something I actively despise, and that is when local law enforcement goes in the tank. They all take an oath to dispense justice without fear or favor. And the first time some local celebrity gets hauled in — and the FSU football players are what they have for celebrities in Tallahassee — suddenly the person gets the benefit of 1,000 doubts. In fact, usually, the law enforcement community in a place like Tallahassee starts its own frenzy in the other direction, because that’s one of the best ways to cover your own complicity, to say nothing of your own sorry ass. Then the victim is the one who gets torched.

This is a guy who should get up every morning and light candles beneath pictures of the local prosecutors. Instead, he’s made a fool of himself in a cafeteria and elsewhere. Then, at the beginning of December, as part of a code-of-conduct hearing, which is still the closest he has come to an actual legal proceeding, Winston released a statement that read as though it had been written by two speechwriters, five lawyers, and Aaron Sorkin on a very bad day. We know this because Winston’s defense team helpfully made the statement available to the entire Internet almost before the toner was dry.

I did not rape or sexually assault … I did not create a hostile, intimidating or offensive environment in the short period of time that we were together. [The accuser] had the capacity to consent to having sex with me and she repeatedly did so by her conduct and her verbal expressions. I never used physical violence, threats, or other coercive means towards [the accuser]. Finally, I never endangered [the accuser’s] health, safety, or well-being.

If you are inclined to bend so far over backward that you fall on your head, you can believe that Winston ever saw this statement before he read it. If you squint really hard, and pray to the Lord for guidance, you might detect a speck of humanity among all the carefully constructed legalisms.

Rape is a vicious crime … The only thing as vicious as rape is falsely accusing someone of rape.

Actually, no, it’s not. One is a crime of violence. The other is incredibly not.

[The accuser] and her lawyers have falsely accused me, threatened to sue me, demanded $7,000,000 from me, engaged in a destructive media campaign against me, and manipulated this process to the point that my rights have and will continue to be severely compromised. [The accuser’s] and her lawyers’ public campaign to vilify me guarantees that her false allegations will follow me for the rest of my life.

Among other places, they will follow him right to the top of his sport, and right to the top of the NFL draft, and very likely to some nice places in between. One place they likely never will follow him is into a courtroom, which is the only place this sad situation ever belonged, and which is the only place where the truth of matters ever had a ghost of a chance to be determined. (The ruling from the conduct committee is still pending, so, theoretically, Winston could be suspended before the Oregon game. And, theoretically, I am the czar of all the Russias.) In a time when unarmed men have been killed by police in the streets, Jameis Winston and the Tallahassee Accessories After The Fact will play out another highly successful season knowing with great confidence who it is that has their backs. There are no laws for celebrities in Hooterville.