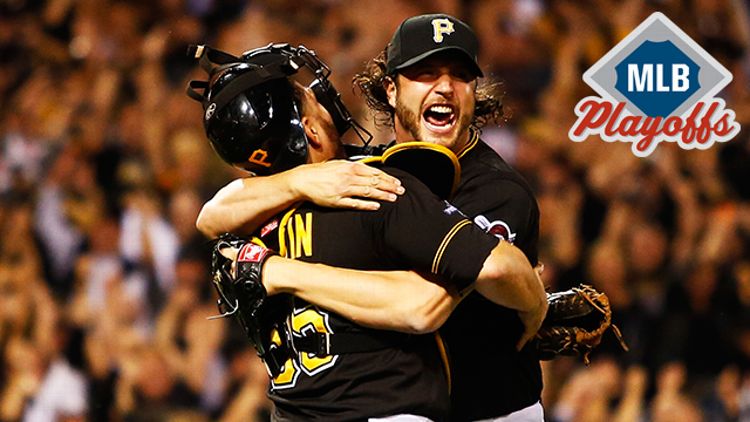 The Pirates are off to St. Louis, while the Reds are headed home after Pittsburgh won the wild-card elimination game 6-2 Tuesday night, before a delirious home crowd at PNC Park. It was a monumental win for a franchise that had gone 21 years since its last postseason victory. It was also a game that met nearly every pregame expectation.

Francisco Liriano just had the best season by a left-handed starting pitcher vs. left-handed hitters in major league history. The Reds responded by … doing nothing.

We wrote about Liriano’s mastery of lefties last month, and Rany Jazayerli doubled down with another look in Tuesday’s wild-card preview. The numbers for left-handed hitters against Liriano’s slider in particular look like a typo: .067/.103/.080, a vortex of pain well illustrated in this graphic by Grantland’s Kirk Goldsberry.

There was no way the Reds were going to bench lefty-swinging perennial MVP candidate Joey Votto, against Liriano or anyone else. Realistically, Jay Bruce and his lefty bat probably weren’t going to get scratched either. But it would’ve been nice to see Reds manager Dusty Baker make an adjustment with Shin-Soo Choo. This season, Choo hit just .215 and slugged just .265 against left-handed pitching, scratching out a respectable on-base percentage mostly by taking many for the team. Combine that feeble offense with Choo’s worst-in-baseball center-field defense, and you’d figure the Reds could have two reasonable alternatives to the status quo: (1) move Choo down in the lineup in the hopes he’d have to face Liriano only twice, or (2) stick Choo on the bench and give Billy Hamilton, his blinding speed, superior defense, and suspect bat that’s at least stronger from the right side a shot instead. Nope. A creature of managerial routine if there ever was, Baker left Choo in to hit leadoff.

Predictably, Liriano made quick work of Choo to start the game, leaning on his deadly sinker-slider combination and punching him out on four pitches. For the game, Choo went 0-for-2 against Liriano, though he did at least manage to get hit by a pitch. Liriano humbled Bruce with four consecutive sliders to fan him in the second, then tossed a brutal slider to Votto to strike him out with a man on second and one out in the sixth. All told, the Reds’ three big left-handed hitters went 1-for-8 against Liriano, with four strikeouts and that HBP. As Pittsburgh Tribune-Review beat writer Travis Sawchik noted, Liriano bagged five swings-and-misses on the first seven sliders he threw to lefties on the night. The one hit the trio managed came on a rare fastball to a left-hander, with Bruce stroking a single to left against a defensive shift.

For the game, Liriano worked seven innings, surrendered just one run on four hits, walked just one, and struck out five, doing so efficiently on just 90 pitches, 64 of those strikes. As the playoff chase rolled through September, the one wild-card matchup that figured to present a clear edge to one team was a possible Pirates-Reds matchup — assuming the Pirates started Liriano and especially if the Reds treated Liriano the same as they would any other pitcher. The Pirates did, the Reds did, and Pittsburgh’s now moving on.

To have a starting rotation as deep as Cincinnati’s but still end up using Johnny Cueto when the Reds did was a puzzler. The former ace hit the disabled list in late June and didn’t start again until September 16. He fared well in his two final regular-season starts, but did so against a lousy Mets lineup and an unfathomably terrible Astros one. The Reds then expected him to sit for more than a week, then come back sharp against a team that doesn’t actually stink. It didn’t go well.

Baseball Prospectus and Rotowire writer Paul Sporer passed along this stat on Tuesday: The only pitcher better than Cueto (.284) in OPS-against on his changeup this year was Tony Watson (.283). Moreover, the Pirates were the worst team in baseball at hitting changeups this year.

So what happened when Cueto faced Marlon Byrd to lead off the second? He hung a do-nothing changeup belt-high in the middle of the plate, and Byrd hit it to Saskatchewan. Mat Latos, the staff ace who would have been on turn for the wild-card game, was suffering through bone spurs in his pitching elbow. Still, given the Reds had all but clinched a playoff spot 10 days ago (two weeks ago, one could argue), they would have had plenty of latitude to line up their starters however they wanted, using, say, Homer Bailey in Tuesday’s do-or-die game and not a potentially shaky Cueto. Hindsight is 20/20 of course. But when Cueto made it through only 3⅓ innings, finishing with a line of four runs allowed on seven hits and more or less losing the game before the Reds ever had a chance to mount a significant rally, the question deserved to be asked.

Tuesday night’s crowd sure felt and sounded like a group of fans who’d waited 21 years for playoff baseball. They went nuts when Byrd homered to put the home nine on the board, then lost their minds when Russell Martin went yard himself to make it 2-0 a couple batters later. Throughout the first few innings of the game, they mock-chanted Reds pitchers’ names the way a hockey crowd might taunt a shaky goalie, or, well, you know.

We’re zealots about trying to quantify everything that can possibly be quantified in baseball. But figuring out how much the raucous home crowd might have helped the Pirates (or if it helped them at all) is a pretty tall order. Per ESPN Stats & Info, home teams win 54.2 percent of the time in the MLB regular season and 54.3 percent of the time in the postseason. Is there any way we can come up with a metric that measures average and peak stadium decibel levels during playoff games and how those correlate to win-loss record? Not even really kidding here.

At any rate, anytime a game atmosphere is that electric, then ends like this, that’s a strong night for Pittsburgh sports fans.

The power of analytics

Sawchik recently wrote a great feature on Dan Fox, the man who helped build the Pirates analytics department into one of baseball’s strongest. One of Fox’s stated goals this year was to build a pitching staff full of ground ball pitchers, one that would burn so many worms it would push PETA to high alert. The Bucs would then accommodate that grounder-heavy staff by becoming one of the league’s most frequent users of defensive shifts. That way, an infield defense that included mediocre defenders like Pedro Alvarez, Neil Walker, Garrett Jones/Justin Morneau, and (when he played) Jordy Mercer could be in the right place at the right time to turn potential hits into outs. The strategy worked. The Pirates led the majors by a mile in ground ball rate at 52.5 percent, and a team sorely lacking defensive range in the field still emerged as one of baseball’s best defensive clubs by advanced metrics.

It’s fitting, then, that the Pirates would advance to the NLDS on a grounder to second base. It was a ball hit toward the middle, but right at Walker, who had shaded that way at the bench’s behest.

Will teams rethink how they approach the free-agent market?

Teams like the Yankees, Dodgers, Angels, and Red Sox have nearly unlimited revenue sources, affording them the freedom to shop for the highest-priced talent. Meanwhile, teams like the Pirates, A’s, and Rays (the three lowest-payroll teams that didn’t ostensibly tank this year) are forced to shop in the discount aisle because of limited revenue streams. But given how poorly some of the biggest deals in recent free-agent markets have turned out (Josh Hamilton, Albert Pujols, etc.), and how well some of the smaller deals fared (Coco Crisp, James Loney, etc.), it might behoove richer teams to spend a little more time and effort mining for gold themselves.

The two big scores of last offseason for the Pirates were Liriano and Martin, and those two are the reason Pittsburgh has advanced. Given Liriano’s long history of injuries and erratic performance, it wasn’t a surprise to see him negotiate what looked set to be a two-year, $12 million deal, a tiny sum in a market where an about-to-turn-36-year-old starter like Ryan Dempster could fetch $26.5 million over a two-year span. Instead, Liriano’s joking attempt to startle his kids instead earned him a broken arm and a drastic reduction in his salary, with only $1 million guaranteed in 2013. Liriano pitched brilliantly this year, earned some more money in incentives, and has ensured that the Pirates will pick up their club option for him at $8 million next year.

Meanwhile, Martin signed with Pittsburgh for two years and $17 million after the Yankees curiously chose not to make a big effort to re-sign him over the winter. Even granting that he hit just .211 last year, he still hit a career-high 21 homers, played his usual solid defense, had a good track record, wasn’t turning 30 until February, and didn’t figure to cost a fortune. Whether the Yankees were bullish on Chris Stewart and their legion of stiffs, didn’t want to hand out another multiyear contract with an eye toward ducking under the luxury tax in 2014, or just didn’t like Martin for some reason, it was a big miscalculation on their part. Whatever the case, New York’s loss was Pittsburgh’s gain, with Martin roughly matching his near-league-average offensive production while turning in a big year defensively, handling the Pirates staff with aplomb. On Tuesday, he became just the seventh player in MLB history to homer twice in a winner-take-all postseason game, and the first catcher to homer for three franchises in postseason play.

Add it all up and you’ve got a giddy Pirates club and an enraptured home crowd that could finally raise the Jolly Roger again after a playoff win. Drink up, Bucs fans! Your team gets to play another day.