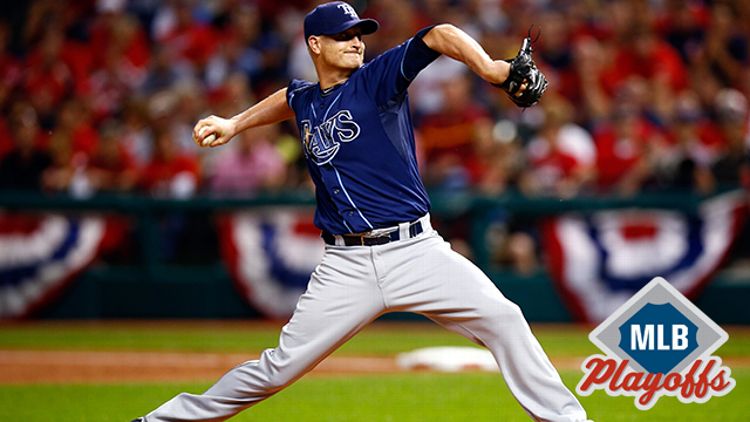 The Tampa Bay Rays are off to Boston for a 2008 ALCS rematch after shutting out the Indians, 4-0, Wednesday night in Cleveland. This was a classic Rays win, one powered by talent, but also flawless preparation.

Previewing the game, we noted that Cobb’s changeup was his best pitch, the ninth-most effective changeup in baseball per FanGraphs. Still, the Indians came into Wednesday’s game having hit the changeup more effectively than any other team. The solution we proposed for the Rays starter was to lean heavily on his curveball instead, to wit: “… don’t be surprised if Cobb starts breaking off a bunch of benders tonight.”

Cobb went 6⅔ innings on the night, tossing 107 pitches … and 35 of those were curveballs, a career high. Indians center fielder Michael Bourn felt the sting of that curveball (a spike-curve in which Cobb applies pressure to the ball with his index finger) more than most. In the third inning with a man on first and one out, Cobb fired a nasty bender that disappeared at Bourn’s ankles. Swing and a miss, strike three. In the fifth, Bourn came up in a bigger spot. The Indians looked ready to finally break through, putting men on first and third with nobody out. If Bourn could simply put the ball in play, Cleveland would likely score at least its first run, chipping away at what was by then a 3-0 Rays lead.

That’s when Cobb unleashed his most masterful pitch sequence of the game.

• 93 mph fastball on the inside corner, strike one

• Setup fastball high and out of the zone, ball one

As ESPN Stats & Info noted, Cobb went to his curveball 26 percent of the time with the bases empty Wednesday night … and 41 percent of the time with runners on. As Grantland’s Kirk Goldsberry demonstrates below, Cobb didn’t quite smoke hitters with his curve as thoroughly as he did with his changeup this year. But it was still a highly effective pitch, one that batters struggled to hit for power.

More than just blindly chucking curves, though, Cobb kept batters off balance by mixing things up. He threw inside and outside, up and down. His pitch-by-pitch velocity chart for the game looks like a damn roller coaster. When you’ve thrown hitters off balance all night, you can throw pitches they might normally hit, too. Cobb escaped a bases-loaded, one-out jam in the fourth by inducing a double play from Asdrubal Cabrera, then got Jason Kipnis to tap back to the mound with two on and two outs to end the fifth. Both times, Cobb fired his changeup to escape jams.

There’s a sabermetric principle that posits that pitchers who strand a high percentage of runners they put on base are due for regression — that other than a few exceptions, most pitchers don’t have an innate ability to pitch much better than the masses with runners on base. Whether or not that’s true, here’s what we can say for sure: Cobb has been a runner-stranding machine this year.

The right-hander came into the wild-card elimination game having ensured that 81.4 percent of the runners he put on base didn’t make it home (league-average strand rate is in the low 70s). TBS, which did a commendable job with both its pregame and postgame coverage as well as the actual game broadcast, offered up some choice Cobb tidbits after the game: He’d allowed no homers with runners on base since April, and had never allowed a grand slam or three-run homer in his career. On Wednesday, he and the Rays bullpen pulled multiple Houdini acts, putting two runners on with less than two outs three times, only to escape without giving up any runs each time. Some of the biggest names in the Indians lineup fared worst: The top three hitters in the order, Bourn, Nick Swisher, and Kipnis, went a combined 0-for-12, while Cabrera put up an 0-for-4 himself. In the end, the Rays hurled a nine-hit shutout, marking just the ninth time in playoff history that a team had allowed nine or more hits and still held its opponent scoreless.

Something else we noted in the game preview: Salazar threw the fastest fastball in the game among starters with as many innings pitched as he had, averaging 96.2 mph. That pitch could be tough to hit, particularly for lefties. But watch out for right-handed hitters, we cautioned: They slugged a sky-high .574 against Salazar’s fastball this year and could do some heavy damage at some time during the game.

The first six Rays batters felt the wrath of that heater, with Wil Myers whiffing on a 98 mph offering, James Loney on a 99, Ben Zobrist fouling out weakly to third on 100, and Desmond Jennings also fouling out to third, on a 98 mph fastball.

Then, lightning struck. Delmon Young, a right-handed hitter and free swinger who loves to rip at fastballs, got a 98 mph heater chest-high and nowhere near Indians catcher Yan Gomes’s target. Young took a huge swing and launched the ball deep into the night, way up into the bleachers in left-center.

This was a “The Russian is cut!” moment. As scary as it can be to face a pitcher who lights up the radar gun like Salazar does, high-90s fastballs are hittable if they don’t move too much, and if you’ve got the timing down. An inning later, the Rays confirmed their ability to hit the pitch, getting a single from Loney, then two more hits from right-handed batters — a single through the left-side hole by Evan Longoria, and a ringing double down the left-field line by Jennings. Suddenly it was 3-0 Tampa Bay, and no one was quaking against Salazar’s fastball anymore.

We briefly mentioned the acquisitions of David DeJesus and Young in the game preview. Though DeJesus had struggled offensively this year, you could see the logic in that move, with the Rays having targeted him for a good two or three years, coveting his defense, doubles-hitting, and other subtle but still valuable skills.

Young, though? The baseball world thought so little of this former no. 1 overall draft pick (by Tampa Bay, no less) and top-rated prospect that a depleted Phillies team just dumped him outright, and no other team bothered to pick him up, for free, until the Rays pulled the trigger on August 22. He hit a solid .258/.329/.452 in 23 games with the Rays, wresting ample playing time at DH. Still, even at his best, Young’s core skill lies in his ability to hit left-handed pitchers; he’s a career .303/.341/.471 vs. lefties, but just .274/.305/.404 against right-handers. From a distance, you’d figure someone like Matt Joyce would get the call against the right-hander Salazar.

Instead, Young found his name penciled into the seventh spot in the order. A deeper dive hinted at some of the reasons. Lefty swingers Joyce and Kelly Johnson had struggled badly after faring well early in the season, while Luke Scott never really got back on track or even on the field much after a DL stint in August. Meanwhile, Young offered the kind of approach that had a chance to work out against Salazar and his vulnerable-to-right-handed-power fastball. Young had hit eight home runs in his past three postseasons. He owned a career .739 regular-season OPS, but also an .858 postseason OPS coming into Wednesday’s action. He swung at first pitches 45 percent of the time during his career, the most of any active player, and hit .350 on that count (.267 on all other counts). Four of those playoff homers had come on the first pitch. Maybe the Rays didn’t specifically envision Young’s first playoff at-bat as a Ray resulting in a first-pitch monster home run off a high-90s fastball. But in retrospect, it doesn’t seem like that much of a stretch to have pondered it.

Here’s another trope most statheads don’t really buy: that certain players are inherently better in the postseason than they are the rest of the time. They/I will often chalk statistical gaps up to small sample sizes, that if someone like Young somehow managed 1,000 at-bats in October, everything would even out. Maybe, maybe not. But we’ve already got a contender for wildest playoff stat, and the month just started: Delmon Young now has the game-winning RBI in each of his team’s last five postseason wins.

The Rays were prepared for all contingencies

Joel Peralta, the Eddie Harris of today’s game, struck out Swisher with two on and two outs in the seventh, preserving the Rays’ 3-0 lead. At that point, Tampa Bay seemed on its way to a win, and to Fenway Park for a Friday night rendezvous.

But the game wasn’t over yet. The Tribe put a man on with two outs. Another baserunner and the potential tying run would come up. Or a long ball at this point and it’d be a one-run game, with a crowd that would have gone from somnolent to plane-taking-off loud in a span of three seconds. Peralta had retired three of the four batters he’d faced, and Ryan Raburn was coming up. Leave Peralta in, hope for one more out, then turn things over to your closer for the ninth. That was the simple move.

As we’ve seen time and time again over the years, Rays manager Joe Maddon very often eschews the simple move for one that makes you wonder what the hell he’s doing. The Rays skipper summoned lefty Jake McGee from the bullpen to replace the right-hander Peralta and face the righty-swinging Raburn. This looked puzzling at first, given Raburn has always been a destroyer of lefties: .263/.336/.492 against southpaws for his career, and an obscene .308/.403/.617 against them in 2013.

But there was a method to Maddon’s apparent madness. McGee has shown reverse splits over the years, with a career .590 OPS allowed vs. righties, .632 vs. lefties (he showed a slight reverse split this season too). Moreover, McGee is a one-pitch pitcher who throws straight cheese, chucking his fastball 93 percent of the time this year and routinely firing it in the high-90s. As Drew Fairservice of The Score noted, Raburn had hit just .087/.276/.261 on fastballs of 95 mph or higher this year; a small sample maybe, but still a sign that McGee’s big heat could give Raburn problems. Finally, Maddon had to know that any attempt to bring in a righty reliever, or even to leave Peralta in, meant Indians manager Terry Francona could counter with Jason Giambi, who hit below the Mendoza Line this year but had also delivered some big home runs, including a monumental walk-off blast on September 24.

So McGee faced Raburn … and struck him out, slinging a 97 mph fireball that clipped the outside corner and ended the inning.

After the game, Cobb raved about heady veteran catcher Jose Molina’s game-calling. But really, every Rays game involves a chain of smart preparation, from the team’s anonymous but sharp advance scouts and analytics experts to Maddon and pitching coach Jim Hickey embracing data-driven strategies to Molina and the pitchers they trot out executing the game plan. What started with Cobb weaving his way through trouble turned into Maddon making the right call to snuff out one last potential rally, then Fernando Rodney closing things out and firing his trademark arrows to the sky. It was as Rays as a Rays win can get.