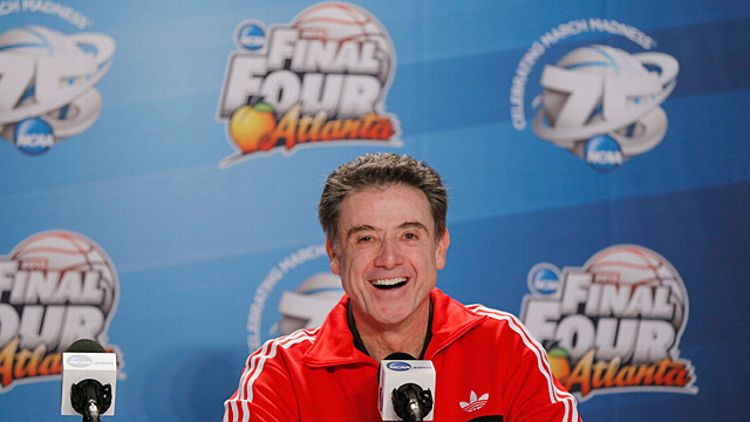 With only three games left in the season, by now you should know that betting on college basketball is borderline insane. But, on the off chance you’re still throwing money at an unpredictable sport that’s in the midst of one of its most unpredictable seasons, here are five things I guarantee will happen during the Final Four games. All you have to do now is find a casino that offers any of these as prop bets, then sit back and count your money.

I don’t necessarily think CBS shouldn’t talk about Rice, but at this point, what is there to be said that hasn’t already been said a million times? Who in their right mind has an opinion that isn’t “Mike Rice is a scumbag, Rutgers athletic director Tim Pernetti is a coward, and I still don’t understand why Rutgers is joining the Big Ten”? It’s the one topic in sports that literally everybody agrees on. I guess I could see Charles Barkley making a joke about how players are soft these days, but it’s much more likely that he would go with something along the lines of “If Rice had tried that on me, I would’ve punched that knucklehead.” Whatever the case, I’m predicting Greg Gumbel will bring the topic up, and each guy in the studio will try to explain in his own way how Rice’s actions were abhorrent.

I’m not saying that he’ll hit another 35-footer to send the game to overtime, or even make another clutch play. But I am saying that at some point during the Syracuse-Michigan game, Burke will go into full Trey Burke mode and do something that only he can do. Maybe it will actually be a clutch play or a deep 3, maybe it will be a drive to the basket capped off by an impossible finish, or maybe it will be a series of plays on both ends of the floor. I don’t know the specifics, but I guarantee that there will be a moment when Burke again makes us wonder why we ever thought anybody else should be named the national player of the year.

3. ‘One Shining Moment’ will show at least one player in tears

I don’t know if it’s because few players cry when they lose and those who do usually cover their faces, or if CBS just doesn’t want to embarrass anybody, but “One Shining Moment” doesn’t show actual tears flowing as often as you might think. When I was a junior at Ohio State, I fake cried in the 2009 tournament when it became clear that we weren’t going to beat Siena, with my sole purpose being that I wanted to make “One Shining Moment.” And in what some have referred to as the upset of that tournament, not only did I not make “One Shining Moment,” I didn’t even get shown on camera during the game. Hell, even Adam Morrison, the most famous college basketball crier of all-time, provided CBS with a few solid minutes of bitter beer face pout, and he still wasn’t embarrassed too badly in 2006’s “One Shining Moment.”

But this year, CBS is coming out swinging. I’m sure I’m overlooking a few guys, but I don’t recall seeing any players cry during this year’s tournament. That doesn’t’ matter. If any player so much as had a piece of dust in his eye, CBS’s cameras caught it, and the footage will be used in “One Shining Moment” during the lyric “… and when it’s done, win or lose …”

4. Kevin Ware’s mom will pick up where Sonya Curry left off

Last week, we bid adieu to one of the legends of the game when Sonya Curry ended her illustrious career as the best-known mother in college basketball. Since then, water-cooler conversation all over America has focused on one thing: Who will be the next queen bee of March Madness? Who among the thousands of candidates has the gall to go onstage after the Rolling Stones? Answer: The mother of the guy who suffered the gruesome and heartbreaking injury to his lower leg on Easter Sunday. Yes, the stars have aligned for Kevin Ware’s mom to take the baton from Sonya Curry and sprint toward the finish line. In fact, I’m so confident that she’ll be shown on camera at least twice this weekend that if she isn’t, I’ll give everyone reading this a full refund for this blog post. So here she is, America. Meet Lisa Junior, your new Sonya Curry:

And that someone will more than likely be Jim Nantz. I can see it now. During Monday night’s pregame show, CBS will cut to Nantz, Clark Kellogg, and Steve Kerr sitting on stools at midcourt. If Louisville ends up playing Syracuse, Nantz will welcome all of the viewers and then say something like, “When you look at this matchup, you have to start with the coaches. Two of the all-time greats are squaring off tonight, and both are looking to become the 14th coach to win multiple national championships.” He’ll then turn to his partners and say, “What would another national championship mean for either of these coaches’ legacies?”
Kerr will immediately pounce on the question, and the first sentence out of his mouth — verbatim — will be, “It would be huge.” Then Clark Kellogg will chime in and say pretty much the same thing before previewing the rest of the game by referring to the basketball with words like “orange” and “pumpkin.”