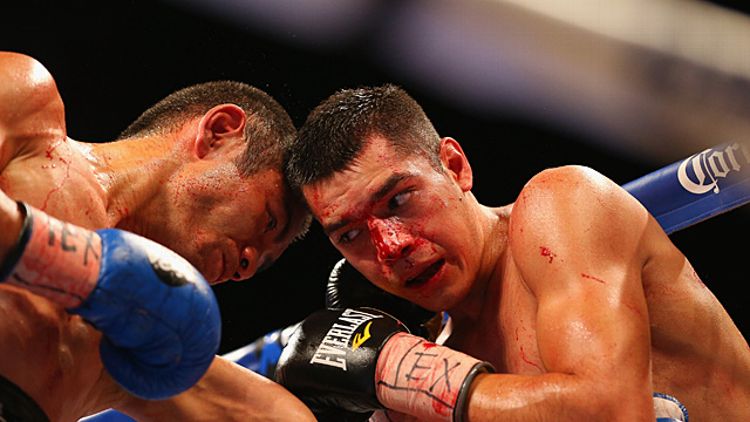 Boxing’s best recurring scene goes something like this: Two fighters who have beaten the living shit out of one another for 12 rounds meet in the center of the ring after the final bell and embrace one another in a show of mutual respect and sportsmanship. The more savage the beating, the closer one fighter comes to killing the other, and the more stubbornly the beaten fighter clings to his insane hope to turn the fight around, the better. It’s yet another example of the barbaric, contradictory, yet somehow elegant rituals found throughout the sport.

After the final bell of their 12-round bout on Saturday night in San Antonio, Nihito Arakawa, his eye swollen out a good two inches past his orbital socket, held out his gloves and hugged the man who had been beating him in the head for 36 straight minutes. Omar Figueroa, for his part, said, “Great fight man. Nothing but respect, dude.”

As Scott Christ pointed out on Bad Left Hook, Figueroa-Arakawa was an exceedingly hard fight to describe, especially in the usual terms of a fighter’s style and the punches he threw to win the fight. There were just too much going on — too much blood, too many head-rattling shots, too many times when Arakawa, who seemed close to death in the late middle rounds, shrugged off a power shot and went right back to smothering Figueroa with hundreds of his own punches.

Until the 11th round, the outcome didn’t seem much in doubt. Figueroa knocked Arakawa down twice and had won the majority of the rounds. But Figueroa’s nose had been cut badly from a head-butt and his hand was hurt and although he had stood in admirably with a truly inhuman effort from Arakawa, he faded in the 11th and again in the 12th. Had the fight gone 15 rounds, Arakawa might have simply worn Figueroa down to the point of utter exhaustion, or he might have died in the ring.

It’s a terrible cliche and an illogical one, but both fighters won on Saturday night. Figueroa, a good-looking, articulate kid with power and heart, is well on his way to being one of boxing’s next stars. And Arakawa, who was mostly unknown stateside until Saturday night, won over thousands of new fans who will certainly want to see him fight on Showtime again. After the fight, Arakawa, bloodied and beaten, stood in the center of the ring and soaked in the cheers from the crowd. It was one of those rare private moments in sports when you can see an athlete acknowledge to himself that he has accomplished something great.

I’ve never really understood why I end up getting so swept up in these displays — if boxing is just an exhibition for the bloodthirsty, shouldn’t we want the combatants to truly hate one another? And if boxing is a gentleman’s sport, surely there could be a way to bring out the level of competitiveness we see in great fights without having to risk a life? I suppose we simply want the fighters to tell us that it was all right that we enjoyed watching them pummel one another nearly to death. But also, perhaps (please forgive me here for getting a bit silly) we simply want that same great catharsis in our own lives. That when the day’s work is done and the struggle ends, we want to be able to embrace the people in our lives without a trace of resentment. All boxing metaphors are really just metaphors about death and I don’t see why this one, however wrongheaded and silly, has to be any different.