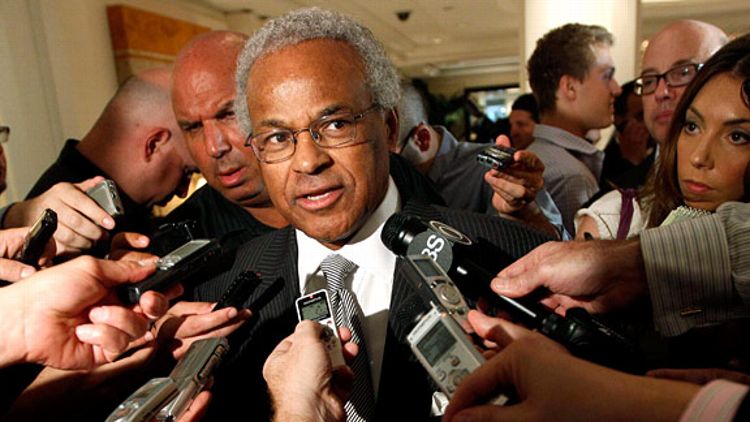 After months of negotiation, NBA owners and the vestigial representatives of the players’ association agreed to a new Collective Bargaining Agreement that saved the 2011-12 season. Here’s a look at some of the fine print.

Revenue Sharing
To ensure all Teams remain financially profitable, the $263 million earned annually from congealed nacho cheese concessions at San Antonio’s AT&T Center shall be distributed equally throughout all NBA franchises. Teams shall also receive a portion of the proceeds from local businesses patronized by local Players. This includes, but is not limited to, (i) Kyle Korver’s emergency hair-stabilizing team, (ii) all gingham dress shirts, bowties and black-rimmed glasses purchased in Miami and Oklahoma City, and (iii) profits from Loaded Potato Skins at any T.G.I. Friday’s within a 25-mile radius of Allen Iverson into perpetuity.

Salary Cap
Along with the implementation of spending limits, all owners will be issued vault magnets imprinted with the grinning faces of Josh Childress, Andris Biedrins and Mike Conley to discourage binge signings. New terms of Agreement include construction of a military-style compound in Samoa (similar to that which holds Earl Sweatshirt) where owners suffering from NBA Playoff fever will be imprisoned incommunicado to prevent them from shoveling fistfuls of gold bullion at J.J. Barea and Tyson Chandler. This excludes New Jersey/Brooklyn Nets owner Mikhail Prokhorov, who cruises the Caspian Sea in a titanium hovercraft and will never be taken alive. As an additional clause, Juwan Howard shall be permitted to play indefinitely but will never be paid another penny, unless said monies are specifically earmarked for goatee maintenance. Furthermore, all emerald-encrusted tiaras purchased by “Basketball Wives” will count triple against the luxury cap.

Length Of Contracts
Player Contracts may cover, in the aggregate, the length of time it takes a Team’s General Manager to croak “the horror” while staring in the mirror and white-knuckling a vial of Valium. This would include the six (6) month duration from when Charlie Villanueva signed with the Detroit Pistons to Joe Dumars’ realization that Mr. Villanueva’s major contribution would be his impressive collection of Sitwellian dress eyebrows. Contracts shall be voidable if a player (i) is injured playing chicken on a Kawasaki Ninja, (ii) discharges a handgun on an airplane following a hand of Euchre or (iii) reveals through on-court performance that the executive who signed Joe Johnson to a long-term deal is a dangerous individual who snorts ketamine while discussing strategy with a Red Auerbach RealDoll.

Player Retention
Under this provision, Teams shall have the right to duct tape a potential Free Agent’s family members in a comfortable but windowless basement until terms of the Contract are agreed upon. Any Free Agent wishing to host a prime-time special to reveal his decision shall be required to use the format of America’s Next Top Model, where the role of Tyra Banks will be filled by Dan Gilbert’s adorable son. If said Player opts to leave his current Team, he must sign his contract in tears harvested from the inconsolable child. Such a Player shall be then deemed worse than Pol Pot and the American public will root voraciously for the failure of a 26-year old who has never been (i) arrested nor (ii) charged with a crime.

Equitable Player Marketing
In an effort to elevate the profile of Players in smaller media markets, a draft shall be implemented wherein the services of all unmarried Kardashians will be distributed league-wide. Production is currently underway in New Orleans for Bellinis & Belinelli, starring the Hornets’ Italian shooting guard and a Kardashian-to-be-named-later in a brunch-related sex tape. Further opportunities shall be created throughout existing NBA properties: a new segment shall be included in NBA Inside Stuff titled Australian Adventures, in which Andrew Bogut will hike around his homeland (i) meeting fans and (ii) killing feral dingos with a blowtorch. Additionally, the only jersey available in retail outlets for the 2011-12 Season shall be that of Kevin Love.

Enhanced Small Market Appeal
To nullify advantages enjoyed by larger cities such as New York and Los Angeles, franchises in Cleveland, Detroit and Milwaukee shall be combined into a corporate-sponsored conglomeration called the “Little Caesars Hot-N-Ready Supreme Team.” Similarly, Memphis and North Carolina shall merge into the “Southern Home Dentistry Canines.” In Minnesota, a massive geodesic dome shall be placed over sections of the city to create artificial “South Beach” conditions where bronzed fans of the recording artist Pitbull may gather and thrive unmolested by sleet, ice or Bon Iver. Furthermore, tax exemptions shall encourage the migration of popular NBA-approved Hip-Hop artists such as (i) william i. am, (ii) Mac Miller and (iii) the dude from those T-Mobile commercials who possesses the edginess of a vat of cold porridge. The Los Angeles Clippers will simply melt into thin air, much like a phantom pirate ship captained by a peg-legged Donald Sterling.

Ownership Rights
In the event of a future work stoppage, Team Owners shall don uniforms and play exhibition games for season ticketholders. These crowd-pleasing events will feature (i) $400 courtside seats, (ii) $12 beers and (iii) Mark Cuban’s decadently milky haunches. Under further terms, all matter of speculation into the enduring relationship between (i) James Dolan, owner of the New York Knicks and (ii) Isiah Thomas, Rasputin-figure of the New York Knicks, shall immediately cease. In a completely unrelated matter, the Toronto Police Service shall announce an end to the investigation into the suspicious death of a drifter discovered strangled with guitar strings outside the Air Canada Centre on May 5th, 1996.

Commissioner Privileges
Dwyane Wade shall not call NBA Commissioner by his first name in public, unless it is preceded by the title (i) “Bawse” or, more playfully, (ii) “Dat Lil Tyrant.”