Farewell to The Kid 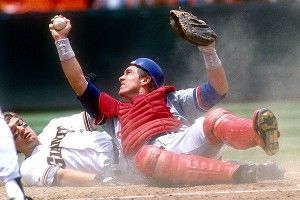 They lost their damn minds. All of them.

Gary Carter’s over the moon, of course. He’s just whacked a double over Andre Dawson’s head to snap a scoreless tie against the Cubs. The last at-bat of Carter’s great career, and he hits a game-winner. The rest of the Expos are also thrilled, predictably.

But the most striking protagonists are the fans. There are 41,802 of them, blowing the roof off Olympic Stadium. It had been an exciting season in Montreal, at least by Expos standards. The team had already been eliminated, though, and Expos fans had shown a tendency to stay away when they had no reason to cheer. Two years earlier, the Expos played their final home game in front of 4,262 die-hards. The year after that, they spent the end of the season on the road, chased from the disintegrating Big O by falling concrete beams.

Not now. Where once there was apathy, now there was bliss.

The death of Carter, who passed away Thursday at the age of 57 from a hyperaggressive form of cancer, has had a profound impact on the baseball community, triggering touching tributes from former teammates, managers, and others who knew him well. If his death was affecting, it’s because his life in the game was even more so.

When the Expos got their start in 1969, team president John McHale made it his mission to build the game’s premier farm system, with the best scouts and best instructors producing the best young players. Guys like Dawson, Tim Raines, Larry Walker, and Vladimir Guerrero all came up through the system, then became superstars in the big leagues.

Carter shone brighter than all of them. Part of that was sheer ability. He earned a reputation as an elite defender, transitioning from his early career as a near-full-time outfielder to a three-time Gold Glove winner behind the plate. His overall numbers ranked with Johnny Bench, Carlton Fisk, and Yogi Berra (and later Ivan Rodriguez and Mike Piazza) — among the greatest catchers of all-time.

But Carter also had a sense of ease in the spotlight. And as his star grew, he attracted hordes of fans.

“Gary was always available to the fans,” recalled Marcia Schnaar, an administrative assistant who was hired in the Expos’ inaugural year and stayed until the last day, 35 years later. “His agent told him, ‘These are the people who pay your salary; be there for them.’ But I didn’t see it as forced. It was genuine. He enjoyed talking to people. Especially all the little boys and girls who came to see him.”

Those encounters stuck with his admirers. With team employees, too. Soon after Carter broke into the majors, he struck up a friendship with batboy Daniel Plamondon, Carter helping Plamondon with his homework, Plamondon teaching a receptive Carter the basics of spoken and written French.

Years later, Scott Abramovitch got to know Carter briefly, serving as a batboy himself during the ’92 season, Carter’s comeback year in Montreal.

“Here’s what blew my mind,” Abramovitch recalled. “I see him again five years later. He remembered my name. He remembered my family. He wanted to know everything. That’s the kind of guy he is. People talk about someone like Bill Clinton, the charisma he had, the way he used to connect with people. Carter had that same ability.”

Not everyone admired Carter’s ebullient personality. Lesser-paid (but equally or more talented) teammates at times seemed to resent his attention-grabbing. Carter earned derisive nicknames from his fellow players, including “Lights” for his camera-ready, media-friendly smile. Even his trademark moniker, “The Kid,” was a jab at the excessive enthusiasm he showed during spring training drills the year before he cracked the big leagues. Occasionally, the resentment would boil over.

That Carter sold himself wasn’t something that bothered ownership. At least not at first. But as Carter continued to reel off All-Star seasons and salaries escalated throughout the game, Expos owner Charles Bronfman began to realize he’d soon no longer be able to keep him. After the 1984 season, the Expos traded Carter to the Mets for four players: Hubie Brooks, Floyd Youmans, Mike Fitzgerald, and Herm Winningham.

The trade to the Mets was the first in a long line of deals that pushed star players out of town due to escalating salary demands. Years later, Bronfman sold the team to a cheap and feckless local ownership group, eventually leading to the team’s move to D.C. and the end of big league baseball in Montreal.

Carter’s impact in New York was nearly as profound. Already loaded with young talent, the team reaped instant dividends from Carter’s arrival, starting with a walk-off homer in his first game as a Met at Shea. Even as he fought mounting knee injuries and surgeries, Carter continued to thrive in Queens, blasting 32 homers in 1985 and finishing sixth in league MVP voting. He regressed somewhat the next year, but gained such a halo effect as one of the leaders of the loaded ’86 Mets that he finished third in MVP balloting.

One of Carter’s signature moments came in Game 6 of the World Series. With two outs, nobody on, and the Mets trailing by two, Carter got ahead of Red Sox closer Calvin Schiraldi, then laced a single to left to keep the Mets’ season alive. You’ve probably heard about what came afterward.

Even on a World Series-winning team, Carter had his share of detractors. He was mocked by some teammates for his straight-and-narrow ways, and his constant smile and enthusiasm rubbed some the wrong way.

“We all disliked Gary when we played against him,” Keith Hernandez told The New York Times. “He was just a little rah-rah varsity collegiate type, even though he didn’t go to college. But I respected him as a player. And when he came to New York, I appreciated him, too.”

Two completely different fan bases were devastated by Thursday’s news. Mets fans reminisced over Carter the veteran, while Expos fans feted the young buck who powered the first successful teams the franchise had ever known.

But Carter’s passing was even more poignant than all that. It made those who knew him reflect on his life, and their own. It made them regret mistakes they’d made, made them wish they could be better people.

In an interview with WFAN, Darryl Strawberry’s message was succinct: “I wish I could have lived my life like Gary Carter.”