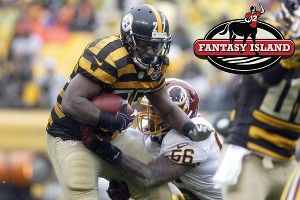 When you get invited to Robert Griffin III’s costume party, you RSVP immediately. What better company to keep on Halloween than ESPN.com’s standard-league scoring leader? With a whopping 158 points, Griffin has even made a believer out of Osi Umenyiora. Fantasy royalty past and present was slated to attend; RG3’s costume party presented a once-in-a-lifetime opportunity to mingle with dignitaries such as Priest Holmes (dressed as a rabbi) and Rob Gronkowski (dressed as a hulking member of the Breaking Amish cast), all while bobbing for apples and getting scared shitless by Mike Shanahan’s zombie mask. And it wasn’t even BYOB!

Of course it was a corporate affair — Dan Snyder signage was plastered on several walls, which had an unintentional chilling effect. Sporting a Waldo costume, Alfred Morris sat sullenly in an abandoned corner of the haunted house. I felt bad for him, so I moseyed over to make small talk. Morris explained his red-and-white-striped getup: He was in the midst of a stellar rookie season, yet no one seemed to notice because of The RG3 Show. “I’ve outscored flashier backs like Adrian Peterson and Jamaal Charles, but the average Redskins fan couldn’t recognize me if I was streaking down Pennsylvania Avenue,” he lamented.

Morris’s despondence soon became unbearable — this was a party after all! — and I escaped to the graveyard-themed open bar. Serving drinks was none other than Andrew Luck. Apparently he and Griffin made a wager after some heavy drinking on the eve of the NFL draft in which the player with fewer fantasy points by November would volunteer at the other’s Halloween bash. Not surprisingly, Reggie Wayne was also seated at the bar, discussing X’s and O’s with his quarterback/bartender. I interrupted to inquire about Wayne’s attire. Though he spent his formative years chilling on Nevin Shapiro’s yacht at The U, Wayne was outfitted in a Kansas State jacket, bifocals, and a whistle. It turns out that Bill Snyder’s magical season in Manhattan has been a major source of inspiration for Wayne, who’s ranked 10th among all receivers in fantasy points at the not-so-tender age of 33. Wayne informed me that when he retires, he plans to play bocce full-time alongside Snyder.

I smashed a couple of jack-o’-lanterns to air my grievances about the lack of food (and quality options on the waiver wire), and Ed Hochuli, dressed as himself, instantly slung a yellow flag toward me for a 15-yard party foul. To my credit, I apologized profusely, but after a review, Ed still gave me a two-minute explanation of what I did wrong.

The most impressive getup of the night probably went to A.J. Green, who had a super-authentic pirate costume that was a wonder to behold in person. It was meant to parody the media’s propensity to award elite cornerbacks “island” status. Green flaunted his robust midseason statistics — 44 receptions, 636 yards, seven touchdowns — and said that right now, there wasn’t an island in the NFL he couldn’t ransack. I gave a half-hearted laugh, but by that point, I was already on my way out the door. The other attendees let me have it about my early exit, but I was used to that sort of ribbing. Considering the season I’ve had, I didn’t feel much like I fit in with the fantasy elite. And after the Falcons thrashed us on Sunday, I had extra film to watch and a new game plan to study in order to prevent this Foles kid from taking my job. No guts, no glory.

On the way out, RG3 remarked, “Thanks for stopping by, Mike. Nice Dwight Howard jersey. What are you supposed to be?”