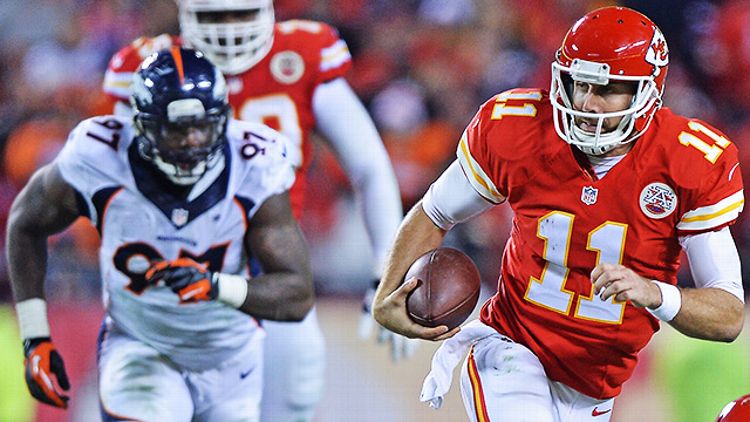 We do want to talk about playoffs, Jim, because there is so very much to discuss. For instance: Is Andrew Luck’s recent slump a cause for concern? (Kinda.) Should I start Ryan Fitzpatrick over Luck? (NO.) How about Carson Palmer? (Yeah, as crazy as it sounds.)

There’s more: I know friends don’t let friends start Jets, but isn’t Chris Ivory in line for a big game against the Raiders? And what to make of Drew Brees, who’s on a short week and coming off his worst outing of the season? Hell, how plump is Eddie Lacy looking these days?

As you can see, only the most important questions will be answered in our Week 14 preview. Here’s hoping your postseason starts off with a W instead of a Mora-esque rant.

1. QB Alex Smith, Kansas City Chiefs: Aside from Tyler Bray’s continued presence on the roster, the most baffling development of Kansas City’s season is that the Chiefs arguably looked more like Super Bowl contenders during their three-game losing streak than during their prior nine-game winning streak. Sure, their defense has gone in the tank (remember when Eric Berry’s equinophobia was the unit’s biggest concern?), but at least they’ve proven themselves capable of scoring 38 points in frigid conditions and (almost) keeping pace with the Broncos.

What’s more: Alex Smith’s numbers are way up. He’s posted 20-plus fantasy points in three straight contests, and folks are taking notice: Smith has been one of Week 14’s most popular adds, and more than a quarter of ESPN.com owners now have Smith in their starting lineup. Moreover, our golden rule has always been to start the quarterback facing the Redskins, and Mr. Smith is going to Washington this week. Who knows, maybe he’ll finally eclipse 300 yards!

2. RB Chris Ivory, New York Jets: When it’s possible to argue that Matt Simms or (gulp) David Garrard is the best quarterback on an active roster, it’s probably best for that team to simply avoid passing altogether. The Jets doing so would certainly cut down on the profanity at MetLife Stadium, as well as provide human Hummer Chris Ivory with copious opportunities to please his fantasy owners.

Ivory gained 61 yards on just 12 carries last week, easily outshining Bilal Powell, and figures to see even more against a Raiders defense that was just gashed by DeMarco Murray and Lance Dunbar. Additionally, long gains have become pretty standard for Ivory, as he’s pulled off a 52-yarder, a 69-yarder, and a 32-yarder in three of his past four games. He has the dubious honor of being the Jets’ best offensive skill player BY FAR, but he deserves the real honor of being your RB2 or flex this week.

The fact that it’s OK — nay, advisable — to start the Patriots’ D/ST despite their troubles against Keenum has nothing to do with the Patriots. It has everything to do with the Browns’ quarterback situation, which is in complete disarray (yes, even more so than usual). No starter has been announced yet, and the best possible option, Jason Campbell, was just cleared to return to practice after suffering a concussion in Week 12. Of course, “best possible option” is a relative term here; Campbell is responsible for five turnovers in his past two games and would surely pad Aqib Talib’s stats if he got the nod. Not to be outdone, Brandon Weeden also remains sidelined with a concussion, and if he gets the nod, New England’s D/ST would easily set the record for most fantasy points in a game. (Watch this, this, and this if you don’t believe me.) The next two options are Caleb Hanie, who once made Bears fans wish an MCL-less Jay Cutler was under center, and Alex Tanney, a so-called “trick shot artist.” Keenum is practically Otto Graham compared with all of them. 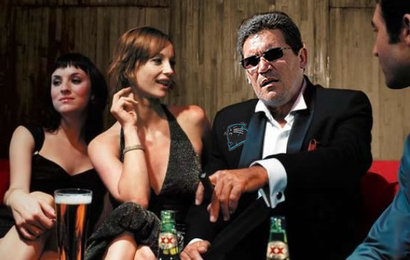 I refuse to bet against Riverboat Ron anymore, even if it involves betraying my dude Breesus, whom I own in two leagues. The Panthers have held quarterbacks to an average of 8.75 fantasy points in their past four games, and while you’re obviously not going to bench Brees, you should be pretty nervous about starting him in a do-or-die situation. At least he’s at home, setting up a sort of irresistible force vs. immovable object matchup. I for one like the immovable object.

2. WR Demaryius Thomas, Denver Broncos: Thomas has been a paragon of consistency this season, as he’s one of only three receivers who’s scored double-digit fantasy points every single week in PPR leagues. In standard leagues, Thomas hasn’t dipped into single digits since Week 6, and he manages to accrue plenty of receiving yards even when his receptions are low. But the Titans have held WR1s to 44.5 yards per game, good for second-fewest in the league, and with Alterraun Verner shadowing Thomas, expect Peyton Manning to key in on Decker and Welker and Julius Thomas instead. Also, I think Manning is still fazed from being called a succulent baby lamb.

And of course, Green came away with 10 fantasy points compared with Gates’s two. This doesn’t strike me as a Gronk/Hernandez situation, because I don’t think both Green and Gates will be viable, fantasywise, on a weekly basis. As the indispensable Chargers blog Bolts From the Blue notes, “Green … looks like the same or similar athletic freak that Gates was in his prime, but faster,” whereas Gates remains hobbled by a hamstring injury. In fact, if the Chargers lose one of their upcoming tilts against the Giants or Broncos (which would essentially eliminate them from the playoff race), I wouldn’t be shocked to see Gates placed on IR. There’s no sense in risking further injury with nothing at stake, especially when you’ve got a more than capable replacement like Green.

Fantasy Bonanza of the Week: Lions at Eagles (1 p.m.)

Henne-Keenum II was hard to ignore, but how could I pass up on two of the league’s best passing offenses versus two of its worst pass defenses? Megatron is obviously matchup-proof, but it won’t hurt to face the team that allows the most fantasy points and touchdowns to receivers, as ESPN’s handy, unlinkable fantasy projections tell us. The extra Thanksgiving rest will aid Reggie Bush’s ailing calf. Between Bush, Pete Carroll, and Ed Orgeron, it’s starting to feel like a renaissance year for the 2004 USC Trojans, especially if you pretend Joique Bell is LenDale White. Bell saw 19 carries against the Packers to Bush’s 20 and nearly matched Bush in fantasy points, too. Joseph Fauria went to UCLA, hence his recent struggles.

Decidedly NOT struggling: Nick Foles, who still hasn’t thrown an interception, thanks to some favorable officiating. Riley Cooper’s targets remain middling but steady, and he’s a certifiable WR2/WR3 because of his ability to do things like this:

And while Zach Ertz’s 23-point performance isn’t necessarily a sign of future success, considering it came facing an Arizona team that’s consistently dreadful against tight ends, Ertz is worth a pickup in case it is. And God bless LeSean McCoy for continuing to rank among fantasy’s top five running backs despite his paltry touchdown total. Who knew Foles would be stealing your goal-line carries? Well, YOU KNEW, I guess.

Remember when Eddie Lacy was fat? Now he’s just phat, barreling over defenses four yards at a time. Despite last week’s incontrovertible evidence that Flynnsanity doesn’t exist, Mike McCarthy is keeping the faith, which isn’t necessarily a bad thing for Lacy’s fantasy value. Lacy should be in line for a Vikings-esque workload to prevent Flynn from Weedening, and figures to be mighty productive against the Falcons’ putrid run defense. I mean, this is the same run defense that birthed Bobby Rainey, Destroyer of Worlds; rejuvenated C.J. Spiller’s and Fred Jackson’s seasons in a single game; and was cannibalized by Marshawn Lynch, among other things. Lacy will make the Falcons look like Notre Dame.

As I’m sure you know by now, Challenge of the Week is not for the faint of heart. It’s a bloodbath, a street fight, and a constant struggle against one’s own nature. The winners are rewarded with knighthood and eternal glory, but the losers are sent to the Grantland fantasy dungeon … FOREVER. It’s a calculated risk, as they say.

Most experts agree that a Challenge of the Week championship ring is far more impressive than any league title, so take heart, owners who didn’t advance to the postseason: You get to use your league’s consolation bracket as a testing ground for new and exciting challenges. It’s real cutting-edge stuff! Sneer at your unsophisticated leaguemates who worry about starting the best possible lineup, for you are a Challenger, and you are here to win. Not just at fantasy football, but at life, because that’s what Challengers do.

There was a groundswell of support in the comments of Tuesday’s post for an Alex Tanney challenge, and while I admire your courage, there’s too much of a chance that Jason Campbell starts to feature Tanney in this space. In keeping with the Browns theme, though, we’ll go with a choose-your-own-adventure challenge, which sounds a lot more fun than it really is. Win with any two of the following running backs in your lineup — Willis McGahee (86.7 percent available in ESPN.com leagues), Chris Ogbonnaya (84.2 percent), or Fozzy Whittaker (99.9 percent) — and there’s a good chance you’ll be mentioned in Tuesday’s post, especially if you’re a soldier and start all three. Take comfort in the fact that they’ll all surely outscore Trent Richardson, and remember to tweet me your winning screenshots.

This post has been updated to reflect that Demaryius Thomas is one of three receivers to score double-digital fantasy points in PPR leagues each week, not the only receiver to do so.

About Last Night: You Can't Handle the Jags!