Fantasy Fantasy Football: A Look at the Experts’ Week 2 Picks 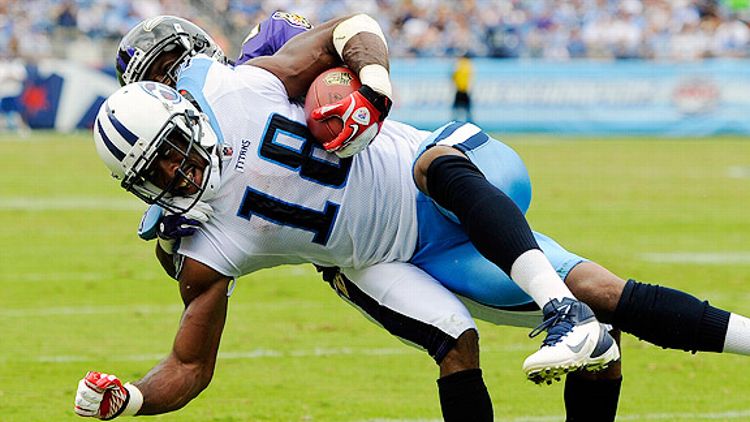 It’s time again for the most important weekly feature on the Internet: Fantasy Fantasy Football. Throughout the NFL season, we’ll be evaluating five premiere fantasy football gurus as they tell us who to start and sit each week. Using a highly-flawed method based loosely on mathematical principles, we’ll attempt to reveal the one true football prophet. (Here’s how it works: A pick counts in their favor if he ends up in the top half of the weekly scoring leaders. There are four categories — QBs, RBs, WRs, Defense/Special Teams- and points are awarded on a 5-1 scale in each.) The experts are:

Watching our star-studded cast dispense their wisdom made me envious and I wanted to get in on the act. Well, it turns out there’s a reason they’re the experts. To anyone who took my advice and started Mike Pringle last week, I apologize. It seemed like a sure thing, but it turns out Pringle is a quarterback for the Montreal Alouettes of the Canadian Football League. Even worse, he retired in 2005. My bad.

Fantasy Dis of the Week

“Your strategy is so reactionary, you once started Donovan McNabb because he smiled at his fake mom in an old Campbell’s Soup commercial!”

BURN. On to the picks.

3.5 points: Eric Mack is a fellow who tends to put a lot of names out into the fantasy ether, so I’m making the executive decision to take his first five. This week, he put his money on the line with Grossman, Kevin Kolb, Fitzpatrick, Joe Flacco, and Ben Roethlisberger. That’s three of five. He sat Colt McCoy, Kerry Collins, McNabb, Cam Newton, and Hasselbeck. Three of five again, and six of 10 on the week. A consistent start for last week’s third-place finisher.

3.5 points: Michael “Fabulous” Fabiano, fantasy fantasy football’s most colorful character (he once started a mascot to prove a point), turned us on to Stafford, Matt Schaub, Jay Cutler, Josh Freeman, and Grossman. Three of five. He had harsh thoughts in his heart for Matt Cassel, Bradford, Chad Henne, Donovan McNabb, and Matt Hasselbeck. Again, three of five. A blistering beginning! Six of ten and a tie for second!

2 points: For Mike Harmon, I’m going to use the top four on his “heroes/flops” list. Whether these are his top choices is unclear, but we’ve got to draw the line somewhere since, like Mack, he handicaps the majority of the NFL. Still, that effort should be rewarded with two bonus points, shouldn’t it? Let me check with my editors, hold on one second …

Okay, good news, bad news. They say to increase it to 10 bonus points, but award them all to Matthew Berry. Sorry, Harmon. Anyway, he liked Grossman, Roethlisberger, Stafford, and Tony Romo. That’s three of four! He put the flop alert out on Drew Brees, Matt Ryan, Bradford, and Freeman. Freeman struggled, but the others did quite well. That’s four of eight for Harmon after a disappointing finish.

1 point: Jamey Eisenberg, last week’s co-champ, urged us to start Stafford, Roethlisberger, Freeman, Flacco and Grossman. Stafford was a great call and Grossman made the top half, but the other three ended up below the midway point. On the flip side, he wanted us to sit Kolb, Bradford, Orton, Cassel, and Newton. Cassel actually managed to earn negative points, so great call there, but Newton was excellent, and Bradford and Orton sneaked into the top half. That makes Eisenberg 4/10, which is only good in baseball and maybe horseshoes. I don’t understand horseshoes.

5 points: Eric Mack promoted Tim Hightower, Beanie Wells, Fred Jackson, Darren McFadden, and Joseph Addai. Three of five. He brought out the hammer for Delone Carter, Earnest Graham, Ricky Williams, Ryan Grant, and Marshawn Lynch. And that is a whopping five for five! We’re in full Mack Attack mode with a strong eight of 10. By the way, if you’re keeping track at home, five players named Williams had carries in Week Two. And one guy named Willis, but he’s a total poseur.

3.5 points: Harmon’s Heroes included Rashard Mendenhall, Matt Forte, Hightower, Michael Turner, and Cedric Benson. That gave him three of five on the positives, tied for best of the bunch. He expected flops from Maurice Jones-Drew, Chris Johnson, BenJarvus Green-Ellis, Ryan Mathews, and DeAngelo Williams. He missed on Green-Ellis and Mathews, leaving him six for 10.

3.5 points: Fabiano placed his bets on Peyton Hillis, Ahmad Bradshaw, Wells, Hightower, and Benson. Man, nobody can resist Hightower. He’s the Don Juan of fantasy football, which is a role I was hoping we’d fill this week. Fabiano gets two for five. He advised against Greene, Williams, Ingram, Green-Ellis, and Lynch. Just one miss in the bunch, and six of 10 overall. He’ll split the second-place votes with Harmon.

1 point: Berry spread his love to Hightower, Mike Tolbert, LeGarrette Blount, Addai, Danny Woodhead, and Darren Sproles. He unleashed his famous scorn on Cedric Benson, Jahvid Best, and James Starks. It seems easier in this format to pick running backs who are going to fail, and Berry may have hurt himself by only picking three disappointments. Overall, he managed a paltry three of nine. That’s not going to impress the fantasy gods. Especially not Esoch the Stoic, the fantasy god that’s hardest to impress.

4.5 points: Mack opted to start Percy Harvin, Santana Moss, Mike Williams, Kenny Britt, and Jordy Nelson. Nice work, and three of five for his troubles. He wagged a cautionary finger at Early Doucet, Pierre Garcon, Austin Collie, Mohamed Massoquoi, and Brian Robiskie. In this he did not lead you astray, nailing five of five and rolling up eight of 10 total. He’s now looking unbeatable for the week, and may even set a scoring record.

4.5 points: Fabiano started Vincent Jackson, Holmes, Britt, Moss and Manningham. He sat Chad Ochocinco, Thomas, Mike Sims-Walker, Austin Collie, and Julio Jones. With perfect negativity, he manages to tie Mack on the week with eight of 10. If he finishes two above Mack in the final category, he can win the week.

3 points: Like all the others, Eisenberg was fond of Santana Moss. He also chose Burress, Manningham, Meachem, and Nelson. Two for five. He sat Jones, Ochocinco, A.J. Green, Thomas, and Braylon Edwards. That’s six for ten and a close second. You get the feeling Eisenberg is playing for position at this point. I don’t want to call him a coward, but if somebody else does I’ll nod solemnly.

2 points: Berry loved Miles Austin, Dez Bryant, Moss, and Manningham, and hated Plaxico Burress, Mike Williams, and Devery Henderson. Four for seven, with a big miss on Henderson costing him second place. The knock on Berry is that he doesn’t have Mackian intuitive grasp of receivers, and this does nothing to dispel the notion. You’re either born with it or you’re not.

1 point: Charmin’ Harmon liked Moss, Mario Manningham, Stevie Johnson, Robert Meachem, and Santonio Holmes. Whenever I see the name “Santonio” it always seems like “San Antonio” mushed together. The only other city that technique would work for is San Francicso — Sancisco. Maybe New York — Nork. Terre Haute, Indiana would be Taute. Sault St. Marie — Sausarie. That one is actually pretty great. I think I’m getting punch drunk looking up these statistics. Anyway, Harmon’s first half was two for five. He went against Brandon Lloyd, Roddy White, Mike Thomas, and Steve Smith. He only missed on Smith, giving him a respectable but ultimately useless five of nine.

5 points: Eisenberg went all minimalist in this category, advising everyone to start the Lions and sit the Chargers. And lo and behold, he picked the very best and the very worst. Impressive stuff. The history books will remember this as the fantasy fantasy football equivalent of Babe Ruth calling his shot.

4 points: Fabiano was one of the few who put in full effort in this category, liking the Steelers, Lions, and Cowboys. He gave the thumbs-down to the Falcons, Chargers and Chiefs. He was on the money in every case, but I can’t find it in my heart to put him first. Eisenberg’s theatrics won me over.

3 points: Mack, seeking his first overall win, said to hell with playing cautious. He started the Vikings, Cowboys, and Lions. Two of three, and safe. He went a little wild on the flip side, though, sitting the Chiefs, Bears, 49ers, Falcons, Giants, Cardinals, Redskins, and Titans. His hot-doggery cost him here, as he missed on three and left himself a grand total of seven for 11.

2 points: Berry nearly pulled an Eisenberg, going with the Lions as his top defense, but he chose the Saints instead of the Chargers on the bad side. And bless his heart, they ended up being the fourth-best defense, dealing Berry a blow from which it will take him up to a week to recover.

1 point: Harmon also went a little light on the defensive side this time around, choosing to the Buccaners and Broncos as his heroes and saving his wrath for another day. Unfortunately, both ended on the low side, and zero divided by any number is zero. Especially two.

In Week Two, Eric Mack rears his mighty head and sets an all-time fantasy fantasy football scoring mark by a half point!

On the flip side, it’s the second straight week at the bottom for Harmon, and I’m afraid he might have to be put down.

God, I’m sorry, I just looked in the rule book and that’s apparently not a possibility. That only happens when a horse breaks a leg. Again, very sorry. I should have known better.

Mack takes the lead, and it’s a cluster beneath him.

See you for Week Three, unless Harmon puts me down.