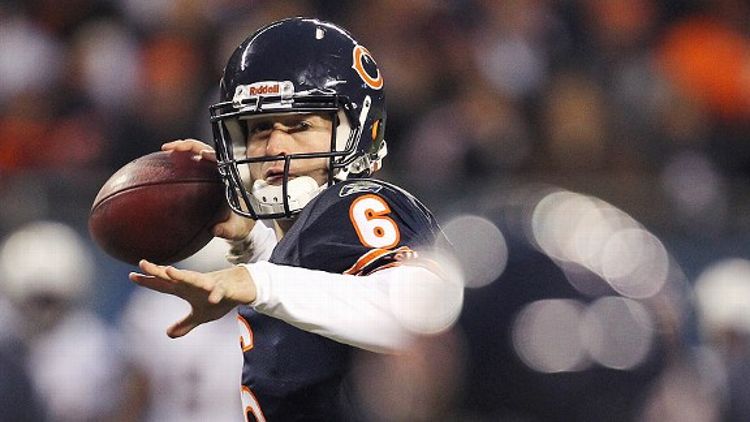 I was watching football at a bar near San Francisco last weekend when the man on the adjacent stool noticed my Bears hat.

“You from Chicago?” he asked

Standard chatter followed. He had family a few towns over from where I grew up. He visits every once in a while. We weren’t a minute into the conversation when he asked the question so many seem to when they learn where I’m from and what team I root for:

“So, what do you think of Cutler?”

There doesn’t seem to be one thing that explains the curiosity, and often, the ire, people have for Jay Cutler. A Grantland reader sent along an e-mail a couple weeks ago pointing out a Forbes survey that counted Cutler as the fifth most-disliked player in the NFL. The top 4? Michael Vick, Plaxico Burress, Ben Roethlisberger and Albert Haynesworth. For anyone scoring at home, that would mean that discounting former prisoners, accused rapists and face-stompers, Cutler is the most hated man in the league. The fallout from Cutler’s perceived bow out of the NFC Championship game has something to do with it, I’m sure. And the way he handled Josh McDaniels’ arrival in Denver certainly didn’t help. But mostly, it just seems like the guy’s a real asshole.

I answered his question the same way I always do — that Cutler makes three throws a game that make me sit up in my chair, that I’ve watched him pick himself up off the ground for two years, and that I don’t think anyone in the league does more with less. Does he seem like an asshole? Maybe. But dammit, he’s our asshole. When the criticism came last season after a sprained MCL kept Cutler out of the second half of last year’s NFC Championship game, even Bears fans had to qualify their defenses. Ten months later, it had turned from obligation to duty. And that’s what makes what happened Sunday so damn shitty.

Chicago has never shied away from accepting controversial stars (see Rodman, Dennis). All that matters is the willingness to prove that you give a damn, and for the first few games of this season, that’s all Cutler did. The Bears’ offensive line was a rotating cast of ineptitude, and each week, Cutler took his beating. As he picked grass out of his helmet and wearily gathered himself up off the ground, the past image of him wrapped in that massive jacket on the sideline last January couldn’t have mattered less. My friend Conor might have said it best: “There were those couple games where you could see him feeling like I do when I come to work, which is, Screw it. This is not going to be fun, but I’ve got a job to do.” Cutler even went so far as to tell his boss to fuck off. Over time, it’s that type of indignation, the same sort of behavior that’s alienated him from everyone else, that’s endeared him to Bears fans. We’ve embraced him because he’s never been afraid to embrace himself.

As a certain team from Nowhere, Wisconsin, has become America’s Darlings and a certain quarterback has been anointed as some Montana-Elway-Jesus hybrid, there was something exciting about football’s most hated non-criminal spoiling an undefeated season. You can have Aaron Rodgers. We’ll take the guy you all love to hate. For the first time in a while, it was all working, and even for the most fatalistic of Bears fans, it was hard to temper the hope. There’s little question that if Cutler had 15 interceptions through these first 10 games, if the Bears were 3-7 instead of 7-3, that the antics wouldn’t be nearly so welcome. But they’re not, and when Cutler makes the sorts of throws like the one to Johnny Knox for a touchdown Sunday — where he sidesteps a barely blocked defensive end and puts a perfect ball in the back of the end zone — being a cocky prick isn’t off-putting. It’s fun as hell.

Now, we’ll find out if any of it mattered. Just as Cutler had finally taken hold of the Bears’ future, he’ll hand it off to an undrafted free agent from Colorado State who needs to go 3-3 to give Cutler a chance to finish what he started. I hope he does, because so far, Jay Cutler hasn’t given a damn, and that’s exactly how we like him.

Previously by Robert Mays:
Is Justin Blackmon Really 6-foot-1? (And Other Questions About Oklahoma State’s Star Receiver)
The Twilight of the Andrew Luck Era at Stanford
LSU-Alabama: College Football’s Biggest Day
Does Missouri fit in the SEC?

About Last Night: Get Your Gronk On