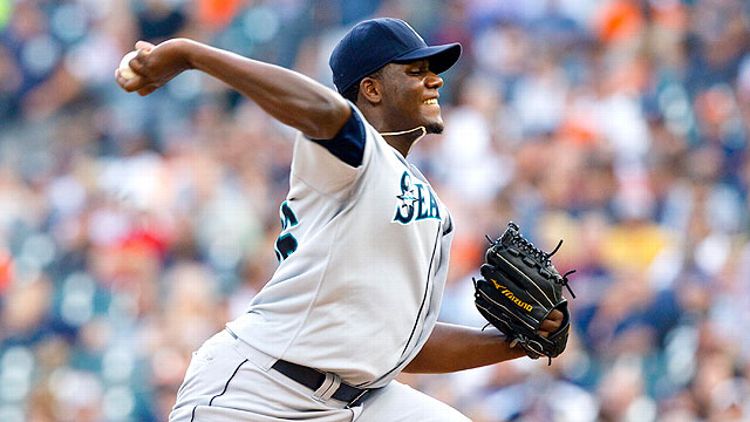 Recovered from a bout of stomach flu ebola and a cross-country move with tyrannical toddlers long enough to jot down a few thoughts on the Yankees’ rotation makeover.

• The Yankees’ biggest weakness, by far, was their shallow starting rotation. In one night, they went from CC Sabathia-Ivan Nova-A.J. Burnett-Freddy Garcia-Phil Hughes to Sabathia-Michael Pineda-Hiroki Kuroda-Nova and Burnett-Garcia-Phil Hughes. Neither Pineda nor Kuroda comes with a perfect resume. But in making their blockbuster deal with the Mariners for Pineda and hooking Kuroda on a one-year deal, the Yankees established themselves as the best on-paper team in baseball. Last year, that title belonged to the Red Sox. So there’s that.

• When breaking down a player’s value, it’s easy to fixate on his weaknesses. Pineda’s got some question marks, but two of the main criticisms levied against him — that he was a lousy pitcher away from Safeco Field and that he faded badly down the stretch last season — don’t hold water. Dave Cameron broke down both those criticisms, noting that Pineda’s core skills stayed strikingly consistent, and that luck and regression toward the mean played far bigger roles in his fluctuating stats.

Within that post, Cameron explained that despite its enormous reputation as a pitcher-friendly stadium, Safeco doesn’t play as an extreme park in right field, only left-center. That part is true: Safeco dinged homers by lefty hitters at a relatively modest 5 percent rate. Problem is, Yankee Stadium’s ludicrously short porch in right helped inflate homers at that park a massive 43 percent. That’s not to say that no right-handed pitcher can possibly survive in that park. Some chap named Mariano Rivera’s been pretty OK there so far. Like Rivera, Pineda offers a pitch that’s highly effective against left-handed hitters, a slider that at its best bites down and in. It’s just a one-year sample size, but Pineda held lefties to just .237/.296/.357 in 2011. Still, there’s a seed of doubt here. Pineda posted the seventh-lowest ground-ball rate among all qualified starting pitchers last year. You can try to apply a simple park adjustment to a fly-ball pitcher moving from a homer-suppressing stadium to a nightmarish launching pad, but it’s unlikely that Pineda’s move to Yankee Stadium will be that easy to predict. He might see one too many elevated fastballs scrape over the wall, panic, change his approach, and fall apart. Or maybe he’ll become a Yankee in the Paul O’Neill mode, embracing his new digs and playing above his already considerable talent.

• That’s what makes this trade so fascinating. Though it’s not a swap of players at the same position, it still resembles what you’d call a challenge trade. Before this offseason, you’d have to dig deep to find examples of high-impact young players traded for each other; deals tend more often to involve one veteran for a bunch of prospects, or pretty much any other combination that’s not two wildly hyped 22-year-olds changing teams. One of the biggest (and only) ones that immediately jump to mind was 2007’s swap of Delmon Young for Matt Garza — and even that’s cheating, since Jason Bartlett was also a key part of that trade. There’s also Josh Hamilton for Edinson Volquez, but for whatever reason, this type of trade has suddenly become all the rage. There were other players involved, but Mat Latos for Yonder Alonso fits the profile. So too does Anthony Rizzo for Andrew Cashner. If two teams laying it on the line by trading young, potential impact players is about to become a trend, I’m all for it.

• If Pineda comes with some question marks, what the hell should we make of Jesus Montero? He’s an enormously talented hitter, but he too could see a dip in his production, moving his prodigious opposite-field power out of Yankee Stadium to Safeco. And of course, we have no idea whether or not he’ll stick at catcher. Early rumblings out of Seattle have the Mariners ready to give it a go with Montero behind the plate and make him prove he can’t handle the job first. If he can’t, well, the Edgar Martinez comparisons have already started. Martinez started his Hall of Fame-worthy career in the homer-friendly Kingdome, but cemented it by raking at Safeco. He and Bret Boone were arguably the most successful right-handed hitters in that park over the past 15 years. Not coincidentally, both could mash the ball to the opposite field. If you’re going to give up a 22-year-old potential ace, you sort of have to get someone back who could be the next Edgar Martinez, if the whole next Mike Piazza thing doesn’t work out.

• It helps if you’re loaded with pitching depth, too. The M’s have several very good starters in their minor league system, led by Danny Hultzen, James Paxton, and Taijuan Walker. The supposed throw-in they got back in the deal, Hector Noesi, might be more than a throw-in too.

• Then again, so’s Jose Campos, “the high-ceiling Venezuelan teenager” the Mariners sent to New York to round out the deal who’s drawn praise from prospect hounds like Kevin Goldstein of Baseball Prospectus.

• Kuroda’s nearly 15 years older than Pineda, doesn’t have anywhere near the same stuff, and offers the double threat of pitcher-friendly park to Yankee Stadium and National League West to American League East. He also didn’t cost a potential Mike Piazza or Edgar Martinez, or any other player in the organization, as the Yanks snagged him for the bargain price of one year, $10 million. We just talked about the buyer’s market for starting pitching that’s cropped up after the early C.J. Wilson and Mark Buehrle signings. Credit the Yankees for being patient and shrewd.

We’ll still stop short of calling this thriftiness born out of necessity, though. This is baseball’s most wildly profitable team striving to become even more wildly profitable. Jayson Stark has the details of the Yankees’ quest to get under baseball’s luxury tax threshold by 2014, the year that level rises to $189 million. The money quote from Stark:

“1. The top luxury-tax rate for four-time repeat offenders (in other words, THE YANKEES) will rise to 50 percent from 40 percent beginning next year. (That rate phases in at 42.5 percent for 2012.)

2. For the first time, under this labor deal, a team that drives its payroll below the threshold, even for one year, can hit the reset button. So if it then goes back over that threshold in a future season, it’s treated as a first-time offender and taxed at only 17.5 percent. … ”

Yes, MLB has devised a system so preposterously easy to manipulate that it defies credulity. The Yankees just need to rein in spending a bit for a couple more years and they’d pocket tens of millions of dollars on top of the money they’ll already keep in not paying players. Or if they’re feeling generous, the Yanks could ramp spending back up immediately after undercutting the threshold. Trade for David Price, then sign him to a $150 million extension? Maybe nab Mike Stanton from Miami to rain moonshots onto the Bleacher Creatures? Anything’s in play.

• Ace Yankees beat writer Marc Carig reports that because factions within the Yankees’ front office don’t want to blow past their all-time payroll high of around $212 million, the team might opt to slum it at DH to replace Montero. Whether that’s slotting Eduardo Nunez more often in the field while the aging Derek Jeter and Alex Rodriguez DH, or signing an inanimate carbon rod, it’s going to be funny watching the Yankees take this approach. According to the Golden Globes, this is a brand new, exciting way to build a roster!

• The Rangers are still trying to hammer out a deal with Yu Darvish. Do they intensify their efforts given the way their top AL rivals are loading up? Maybe even ramp up their run at a potentially discounted Prince Fielder? Do the Red Sox at least get Roy Oswalt to fortify their own pitching staff? Might the Rays actually spend a little money to bring Carlos Pena back? Do the Jays, a popular darkhorse pick (if not this year then next), rethink their strategy and scale back? Or make a big run at a blockbuster deal by dangling a top prospect like Travis d’Arnaud? Do the Orioles order Chinese for lunch today, or splurge for sushi?