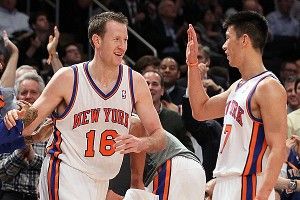 On Friday, arbitrator Kenneth Dam ruled that Jeremy Lin and Steve Novak were entitled to Early Bird rights under the NBA collective bargaining agreement. The decision was a huge win for the Knicks. It allows them to use the Early Bird exception to re-sign Lin and Novak and still have use of their mid-level exception to sign other free agents. While New York fans drool over the possibilities this opens for the Knicks, here’s a quick Q&A to help you understand the ruling.

Let’s start with the basics. What are Bird and Early Bird rights?

The “Larry Bird” exception was created to significantly soften the NBA’s salary cap by allowing teams to exceed the cap level to re-sign their own free agents. (Ironically, Cedric Maxwell, and not Larry Bird, was the first Celtic signed using the “Bird exception.”) Bird rights are the NBA’s player-friendlier version of the NFL franchise tag. Unlike the NFL’s system, though, Bird rights ensure that NBA players can make more by re-signing with their own team than they could by entering the free market, and they do not give teams the power to force players to re-sign with the same franchise (as the NFL system does, one year at a time).

The two- and three-year “waiting periods” were designed to close a cap loophole, which had allowed teams to sign players to one-year deals at small salaries and then re-sign them under the Bird exception for salaries that far exceeded the team’s cap (as was done by Portland in re-signing Chris Dudley and Phoenix in re-signing Danny Manning).

What was the issue here?

This case was entirely about interpreting the meaning of the phrase “by means of trade.” Under the new CBA, a player gets “Early Bird” rights if he:

What was the NBPA’s argument?

The NBPA argued that the phrase “by means of trade” is broad enough to encompass both the movement of players from team to team through the traditional type of trade we see in the NBA (where one team negotiates with another team to trade players, picks, etc.) and the movement of players from team to team through the waiver process. How can a waiver claim be considered a trade? Because a team that wants to sign a player who has been placed on waivers must pay the original team $1,000 and assume the player’s contract. The NBPA argues that this process is essentially a trade — San Antonio traded Novak and his contract to the Knicks for $1,000. Novak’s agent, Mark Bartlestein, also pointed out that if no team had signed Novak off of waivers, the Spurs would have bought him out and then Novak could have signed a new contract with a new team of his choosing. Because the Knicks claimed Novak from waivers, his existing contract was “traded” from the Spurs to the Knicks.

The NBPA also made a classic contract interpretation argument — if the parties meant to deny Bird rights from players who are “traded” via waivers, the CBA would have explicitly carved out waivers from the Bird exception provisions. In support of this, the NBPA pointed to the fact that the CBA contains a defined term, “Traded Player,” which does explicitly carve out players who have moved teams pursuant to the waiver process. (As part of the “Traded Player” exception to the cap, a Traded Player is defined in the CBA as a “player whose Player Contract is assigned by one Team to another Team other than by means of the NBA waiver procedure.”) According to the NBPA, if the parties intended to carve out waived players from the Early Bird provision, it would have used the narrowly defined “Traded Player” term. By instead using the undefined “by means of trade” term, the parties intended to give Bird rights to players who were acquired through the waiver process.

What was the NBA’s argument?

Not surprisingly, the NBA took a much narrower view of the term “trade,” arguing that a trade and a waiver are two very different methods for obtaining players. A trade occurs when two or more teams negotiate for the exchange of players, draft picks, compensation, etc., while a waiver claim involves a single team (acting on its own) to sign a player.

The NBA believed — based on the plain meaning of the CBA and the common use of the word “trade” — that they had a much stronger argument than the NBPA.

What was the Dam decision?

Dam also noted that the two- or three-year “waiting period” requirement for Bird rights was designed to prevent a player from moving as a free agent to a new team and immediately exercising his Bird rights, thus allowing the new team to spend above the salary cap without using a valid cap exception. Dam concluded that the “waiting period” requirement is not applicable, or necessary, when a player is transferred from one team to another via a traditional trade or via the waiver process. In each case, the player is “traded” and has no choice over his new team.

The CBA is more than 500 pages long. Why weren’t they clearer about Bird rights?

Because the parties never contemplated a situation in which a player who was bad enough to be waived by one team would be good enough to be the beneficiary of the Bird exception by another team. We can assume, though, that the CBA will eventually be amended to clarify this situation going forward.

Can the NBA appeal the Dam decision?

Yes. The NBA has already announced that it plans to appeal the ruling, which will be heard by a three-member appeals panel. After hearing arguments from both sides, the panel must issue a decision within 30 days. Given that the NBA free agency period begins on July 1, it is likely that the NBPA will push for an expedited appeal.

And, given that many people in NBA circles believe that the NBA has the stronger argument, this could turn out to be a short-lived victory for Lin, Novak, and the Knicks.