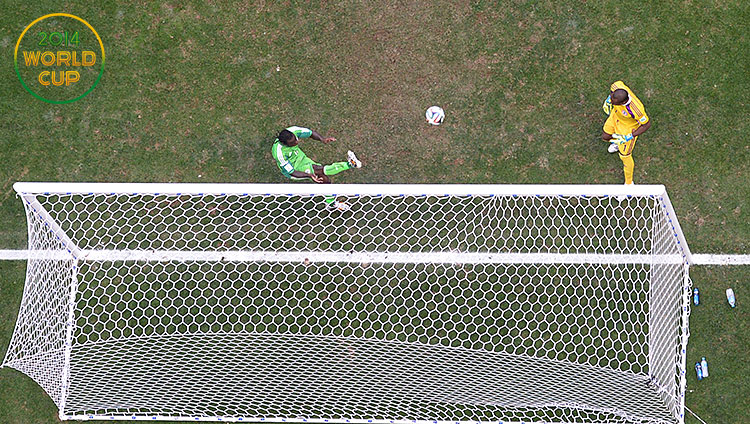 “I haven’t heard the halftime yet,” said Obie, one of the many Nigeria supporters on hand for the Super Eagles’ watch party at the Nigerian comfort-food spot Buka. He motioned toward a projection of the currently level France-Nigeria match and the broadcasters breaking it down at halftime, albeit inaudibly. “We’re so loud.”

Noise is a good thing to keep in mind when thinking about Nigeria’s presence in the round of 16 — noisy in appearance because of its lime-green jerseys, noisy because of Africa’s waning presence in the World Cup and the rallying cries joining the Eagles, noisy because of the atrocities happening in the northern part of their home country. Nigerian midfielder Ogenyi Onazi had even been present at one of the most catastrophic bombings of the conflict, walking through a market in his hometown of Jos shortly before two car bombs went off in a crowded public space. Though the reports coming from home were terrifying, the Eagles scraped through their group — perhaps thanks to a blown offside call — and managed to keep their composure for 70-plus minutes against the French. With a number of aggressive first-half runs at the goal, as well as the sterling play of keeper Vincent Enyeama, the Nigerians stymied a number of promising French combinations and headed to the locker room 0-0.

Buka, an authentic Nigerian joint off Fulton Avenue in Brooklyn, serves national staples like the snail dish igbin and the soft drink Malta Guinness. It caught my eye in a roundup that pointed out the best watch location for every nationality in the tournament; specifically, what caught my eye was a quote from the owner, Lookman Mashood, who promised free champagne every time Nigeria scored. “I don’t care, I hope they score a lot of goals,” Mashood said, voicing a refreshing sentiment not often encountered in New York. I figured it would be a good spot to take in a game, and to watch the Super Eagles’ fans interact with their team as it sought its first quarterfinal appearance.

The restaurant was rearranged for the football, tables lined up in makeshift pews and blinds drawn to enhance the brightness of the projection. Four supporters in lime green burst through the doors at the same time and parked themselves in front of the screen, and as the game approached, the space filled up with both Nigeria fans and others who were probably like me, having read that same World Cup bar roundup and not wanting to miss the experience of watching the Super Eagles with their own fans.

Obie, whose parents still live in the southern region of Nigeria where he grew up, had trouble imagining the horror of Boko Haram, estimating it was the worst thing that had happened to Nigeria in 1,000 years. He had surmised that the increased international visibility had “emboldened” the terrorist group rather than deterring them. Like everyone else in the room, he decided to lose himself, at least momentarily, in the football. As the Nigerian attack intensified, the crowd got more energized — when Victor Moses scooped out an almost-certain goal at the last moment, the group rapturously cheered the dramatic “no goal” data visualization, which was by far the loudest I’ve ever heard a group cheer for something a robot is doing. Nigeria was in business.

In the second half, France wore Nigeria down, winning corners and knocking at the door so often that it eventually splintered with a Paul Pogba header in the 79th minute. “No, no, no,” Obie grumbled, sensing the moment was growing late and Nigeria hadn’t shown enough attacking promise to inspire optimism. France, foot on the pedal, kept barreling toward the goal and eventually created a second, as Joseph Yobo and Enyeama fudged a ground ball. “Own goal … What the fuck is that?” muttered Obie. A lone French supporter clucked, “Allez, allez.” The four Nigerian supporters parked in the front row slumped further into their seats, craning their necks at the screen.

The whistle blew, and the front row sprang up like they were propelled from ejection seats, creating a spearmint parade toward the door. Obie shook my hand quickly and followed them out. Mashood’s champagne stayed corked.

Though the New York Times, through some creative modeling, posited that Nigeria would be the happiest nation if it had won the World Cup, I wouldn’t say sadness ensconced the room as Nigeria exited the tournament. It was more like reality had returned.