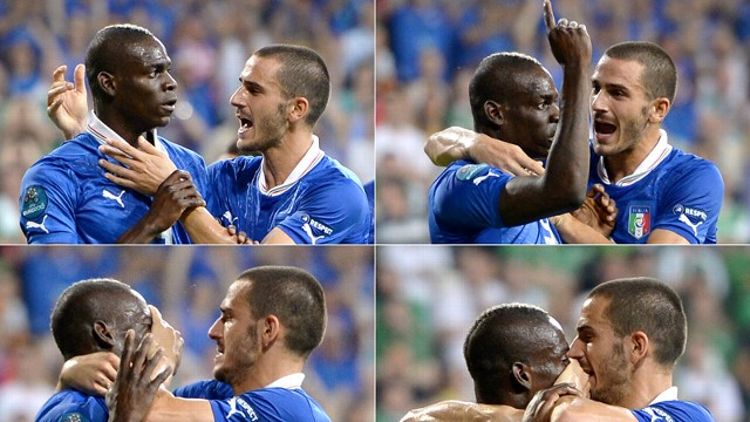 Or at least let him speak his mind! On Monday, the Italian striker scored his second-ever goal for Italy, roasting Ireland defender John O’Shea with a volleyed hit to put Italy up, 2-0, on Ireland, in stoppage time, and secure their passage to the Euro 2012 quarterfinals out of Group C.

The above image is of Italy defender Leonardo Bonucci suppressing Mario’s right to free speech, covering the Manchester City madman’s mouth with his hand to stop him from getting in some kind or all kinds of trouble.

What was Mario saying? We don’t know! Bonucci said he did it, more or less, based on reputation. “What he said [when he scored], he said in English and I didn’t understand. So I put my hand in front of his mouth just in case, because Mario is instinctive but that is also his strength.” Bonucci doesn’t know English, but he knows enough about Balotelli to know that if Mario is getting fired up and screaming, he’s probably not singing the lyrics to “Call Me Maybe.”

Bonucci actually does a good job. I can’t tell if Balotelli’s pissed at the ref for what he believes is a foul from O’Shea (not that it would really matter, since, you know, he scored), or at his manager for his late introduction to the match (Mario came on in the 75th minute). Whatever it was, Bonucci’s fellow defender, Thiago Motta, seemed pretty unimpressed with Balotelli’s act.

After the match, Italy coach Cesare Prandelli seemed to also suggested that Balotelli was about to go off the rails a bit. “You’re not playing on your own,” he said, “there’s a whole team around you who can help.”

If this all feels a bit familiar — Mario Balotelli becoming the center of attention, for both good and bad reasons, at the most crucial moment for his team — that’s because we just saw this story a few months ago. Manchester City made him the focal point of their attack in March and subsequently found themselves in a title race that never should have happened. Toward the end of the season, Balotelli started in draws with Stoke and Sunderland and in losses to Swansea and Arsenal. In the Arsenal match, Balotelli was sent off, leading Man City manager Roberto Mancini to say, “I’m finished. We have six games left and he will not play … With Mario, it’s always a big risk. Every time we risk one [man] being sent off, even if he can also score in the last minute.”

With his inclusion of another infamously hot-headed forward, Antonio Cassano, in the Italian national team, Prandelli has shown he’s willing to gamble on volatile personalities, as long as they deliver on the pitch. On Monday, Balotelli showed both volatility and talent.

Maybe Prandelli and Balotelli’s teammates should just let Mario be Mario and let him talk on the field when he wants. What’s the worst that could happen?