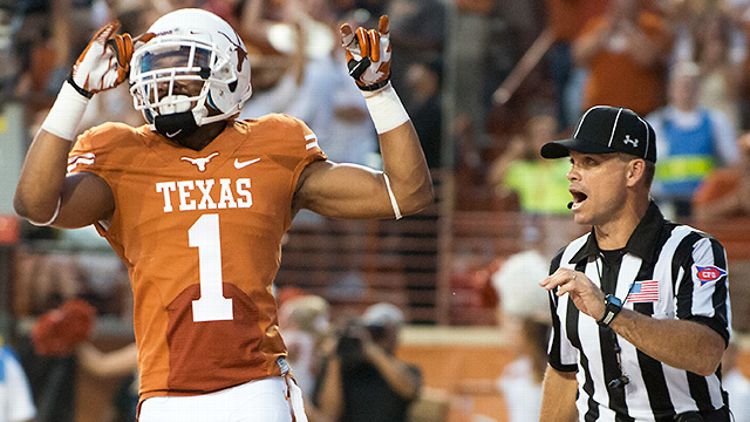 Broomfield shared his thoughts on the incident after the game via Twitter, and got right to the point: “Mike Davis really tried to take me out.” Davis took issue with the understandably torrential wave of criticism: “I play to the whistle … Sorry I was taught that.” The proclamations continued the next day, like so:

Davis, last Friday afternoon: “I don’t have a history of being a dirty player & have never been called one. […] I did exactly what we are taught to do on a WR screen.”

Davis, also last Friday afternoon: “All that being said I am happy #26 was not injured. This is the last time I will address this topic. Longhorn Nation thanks for the support.”

Davis was reprimanded, but not suspended, by the Big 12 on Saturday. Done, right? Nah:

Davis, Monday: “I think people blew it out of proportion and took it too far. It really wasn’t that bad. It just looked bad.”

Davis, also Monday: “If we have another run/pass situation like that, I’ll do the same thing. I mean, if the DB’s loafing, he deserves to get cut.”

Davis, later Monday: “My reference to doing it again means that I will try to legally block the defender when the play is called. Sorry for the misunderstanding.”

Having no further Mike Davis quotes or statements from Texas or the conference to navigate as of Tuesday morning, we have constructed a helpful projected timeline, as a public service, for how the rest of this week is going to go.

Davis, Tuesday afternoon, probably: “Just to untangle this misunderstanding, I didn’t mean defensive backs deserved to be cut-blocked. I meant cut. No, like CUT cut. Like with a sword.”

Davis, Wednesday morning: “My words Tuesday afternoon were spoken in haste. This Longhorns football team is a band of brothers with bonds closer than family, and we think of ourselves as warriors, and thinking like that can lead to metaphorical language that runs away from you. What, this? This is an akontia, a replica of the javelin used by soldiers in ancient Greece. No, no reason.”

Davis, Thursday afternoon: “I don’t know why everyone got so worked up about that. I meant I’m glad this discussion is dead, and that we can put this all behind us and focus on beating Oklahoma.”

Davis, Thursday night: “The lambs are through to the killing field. The wolves howl at the fences. A red film slides over the moon. All is blood. All is darkness. All is silence.”

Davis, Friday morning: “Leaving for Dallas! Looking forward to all your support and another great Red River game! #hookem”

We Went There: The Bucs Start Here