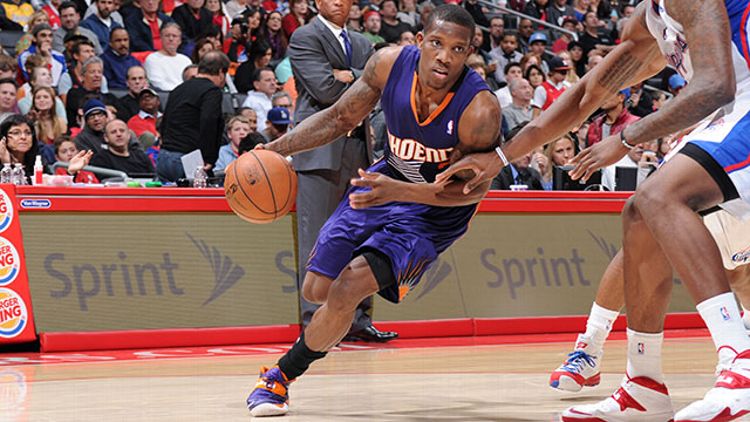 Going into Thursday’s games, there were four teams in the top 10 in both points scored and allowed per possession — in offense and defense, basically: Oklahoma City, San Antonio, Miami, and the Clippers. It’s an artificial cutoff point, but it’s a rough indicator of championship contention.

The Phoenix Suns were on the edge of being the fifth member of that elite group, though they were barely there — no. 9 in offense, no. 11 in defense. Still, nearly halfway through the season, past the time of tiny-sample-size flukes, the tanktastic Phoenix Suns graded out as a very good NBA team. It was the best story in basketball. (And by the way, the Suns were tanking. They can talk publicly now about how they would not introduce such a poisonous influence into their team culture, but they engineered this team to be horrible. Sometimes engineering fails in unpredictable ways.)

Now this: Eric Bledsoe, a budding star and one of the most irresistibly watchable players in the NBA, is out indefinitely and will undergo knee surgery in the near future. We don’t yet know the nature of the injury, though as ESPN.com’s Marc Stein reported in breaking the news, the early rumblings are that Bledsoe has suffered a meniscus tear — a rupture in the same band of cartilage that ended Brandon Roy’s career, sidelined Derrick Rose for the season, and has sent Russell Westbrook under the knife three times now. The meniscus is a big fat jerkface. The injury robs the Suns of the dual point guard lineups that have fueled their go-go offense, and it has potential ripple effects across the Western Conference playoff race and the trade market.

The Suns would appear well equipped to survive Bledsoe’s absence. That’s a nice benefit of having two starting point guards playing like All-Stars. Phoenix has outscored opponents by 3.4 points per 100 possessions overall, per NBA.com. They’ve taken flight when Bledsoe and Goran Dragic play together, having outscored opponents by 8.1 points per 100 possessions in those minutes — a margin that would come close to leading the league in most seasons. And they’ve damn near maintained that exact margin when Dragic leads the team and Bledsoe sits — the best sign Phoenix has going for it now, with Bledsoe gone indefinitely. They’re minus-6.1 points per 100 when Bledsoe goes solo, even though Bledsoe in that alone time has shot much better from the floor and gotten Phoenix running at an even faster pace, per NBA.com.

Dragic isn’t quite the same turbo force, but he has kept Phoenix near its very fast overall mark in his time as the lone point guard, per NBA.com’s pace stats. He’s more careful with the ball than Bledsoe; Phoenix has coughed it up on nearly 20 percent of its possessions when Bledsoe is at the controls without Dragic, an ugly turnover rate that would be the worst in the league by a long shot. Bledsoe is still turnover prone, with a handle that comes and goes, and he remains only a so-so shooter from 3-point land and the midrange area.

The Dragic-only numbers would all seem to bode well for the Suns, who go into this unknown in a strong position. They’re 21-13, a very strong no. 7 in the West. They’re three games up in the loss column over no. 8 (Dallas), four over the Nuggets, five over the Wolves, and six apiece over the Grizzlies and Pelicans. They’re even or ahead in the loss column with the four teams right above them. The Suns are a very strong 16-10 against other Western Conference teams, the fifth-best such mark among their conference brethren, and they’re 5-5 so far without Bledsoe. If they can trudge along at .500 without him — and the surface numbers suggest they can — they’ll finish with 45 wins, in the thick of a playoff race no one thought they’d be in even at full strength.

But I’m worried that prognosis might be optimistic. When Bledsoe and Dragic were both healthy, they tended to play about 20 minutes per game together, leaving only about 11 or 12 Dragic-only minutes, per NBA.com. And those minutes came against opposing bench units, or jumbles of starters and bench players.

Now those 11 or 12 minutes will balloon to 30 or 35, and the Suns will have to start games with Gerald Green in Bledsoe’s spot. Green has shot the 3-pointer well this season on an insane number of attempts, but he’s a minus ball handler and a spacey defender, and the Suns’ ceiling on defense would seem to take an obvious hit here. Phoenix got a lot of nice transition looks with Bledsoe sprint-dribbling up the middle of the floor, Dragic racing to the wing for a potential open 3-pointer, and the other guys filling in elsewhere. And Dragic worked as a dangerous spot-up shooter around Bledsoe pick-and-rolls. That stuff is gone now, and though Bledsoe’s defense had slipped a tad this season amid some small injuries and a larger offensive load, he and P.J. Tucker comprised a killer perimeter defense duo.

Bledsoe had emerged as a very good point guard in his own right. Executives across the league were skeptical he’d ever be able to run a half-court offense as the lead dog. The pessimists pegged Bledsoe as a speed-only guy, lacking the nuance to work within a traditional offense.

It was all right there on film: This guy picked up a ton from Chris Paul, and he has even added a Steve Nash–style quick-release one-handed gather and layup this season. Bledsoe has all the off-the-dribble tricks — hesitations, crossovers, fakes toward a pick, and even that very CP3 tendency to use his ass as a weapon in creating space. He can see all the classic pick-and-roll passes and make them on time. It’s not all there yet; the turnovers are high, and the Tony Parker–style tear-drop is still a work in progress. His jumper is better, but he needs time to set his feet, and defenders feel comfortable going under screens against him. Still: He has put up very good pick-and-roll numbers this season, both as a scorer and a distributor, per Synergy Sports. Phoenix will miss him badly, even with Dragic still around.

Then there is the obvious drop-off to the backup point guard. Ish Smith is a speed demon, but he can’t shoot at all, and his teams’ offenses — including Phoenix this season — have typically fallen apart during his time on the court. Phoenix just signed Leandro Barbosa to a 10-day contract, but Barbosa’s most recent work in the NBA did not suggest he will be ready now to run an offense.

It’s right to be concerned, which is why fans immediately began asking if Phoenix might now try to re-tank. It’s a valid question. Phoenix started the season with eyes on the top of the draft, and they were ready to use Channing Frye, a crucial floor-spacer, in various three-team trades centered around Omer Asik, per several league sources familiar with those talks. (Phoenix would not have received Asik in those deals.) Bledsoe’s injury ensures that Phoenix would be very, very bad if they found a trade for Goran Dragic.

Dragic is a tricky guy to deal. He’s clearly an NBA starter, and he makes starter-level money — $7.5 million in each of the next two seasons, plus a player option for the same amount in 2015–16. A bunch of solid playoff teams could use a boost at backup point guard — Oklahoma City, Golden State, Dallas, Washington, Minnesota — but Dragic earns too much for that kind of role, and some of those teams have cap situations such that taking on Dragic’s deal would be difficult. (That is why some of those teams took a look at Kyle Lowry, performing well on an expiring deal. But if Toronto keeps playing like this, Lowry isn’t going anywhere.)

Phoenix isn’t going to just give Dragic away, especially since they already have a gazillion future first-round picks. They’d probably start the theoretical Oklahoma City bidding with Reggie Jackson, and the conversation might end there. It’s just hard to find a team that has need at the position, motivation to deal, and assets that are worth Phoenix’s while. One off-the-wall suggestion: Detroit. The team is a mess, Brandon Jennings has been mostly awful, and Dragic has already shown he can play the nominal shooting guard alongside another point man. Phoenix is a bit thin on the wing. Could the Pistons (already in debt a protected first-rounder to Charlotte, remember) build something around Kentavious Caldwell-Pope and one of their expiring deals? Detroit probably wouldn’t consider using the cap room they have earmarked for this summer on Dragic, especially with the all-in commitment to Jennings. And they have hopes for KCP. I just like the idea of using one player to add shooting and decrease the team’s dependence on Jennings — something that could unleash his best qualities, too. You could build a similar deal with Sacramento around Ben McLemore, though the Kings like McLemore a lot and are less invested in making the playoffs this season. New York needs point guard help, but a 2019 first-rounder and Iman Shumpert probably isn’t getting it done.

Which is why I’m rooting for Phoenix to go the other way: keep Dragic, keep Frye, and find an upgrade at backup point guard. The Suns have extra picks and about $4 million in cap room. A certain professor in Denver is unhappy and reportedly on the trade market. Eric Maynor is out of the rotation in Washington, though he also has what looks like a dreadful $2.1 million player option next season. Will Bynum is probably gettable, though his contract is equally unappealing. Jordan Crawford has come back to earth in Boston, GM Ryan McDonough’s old stomping ground, but he’s a useful playmaker (in short, closely monitored stretches) playing on an expiring contract. Heck, maybe the Raptors go south and decide to deal either Lowry or Greivis Vasquez. Maybe the Suns kick the tires on everyone’s favorite combo guard lottery disappointments — Jimmer Fredette and Austin Rivers. There are other names floating around that would serve as upgrades over Smith/Barbosa.

They could also use an extra draft pick to find another quality big man, especially since losing a perimeter player may force Marcus Morris to work as a full-time small forward instead of splitting time at the two forward spots.

Besides, Phoenix is at least nine games up in the loss column over 10 other teams. It’s probably too late for the Suns to tank into really juicy draft position, unless the whole team suffers a wave of very serious fake injuries. The Suns may not have much choice now but to just plug away at a playoff spot, dealing only if they can nab a really good asset in return.

The timing is especially bad for Bledsoe, who is set to enter restricted free agency this summer and was playing his way into something like a max contract. This is a reminder of how much luck goes into team-building. First, the story was that Phoenix was probably right to be cautious in extension talks with Bledsoe — talks that ultimately failed. Then, when Bledsoe came out destroying everyone, the Suns were fools who had missed a chance at a below-value early extension. Now? Who the heck knows? They may get Bledsoe at a Stephen Curry–style injury-related discount. They control his fate either way, and given that players can recover fully via meniscus repairs (with complications in some cases, such as Westbrook’s), the two sides should be able to strike a fair deal. Phoenix will control the process regardless, via matching rights.

In the meantime, it’s another sad injury in a month full of them. Let’s hope the Suns rally and continue to work as the league’s most pleasant surprise.