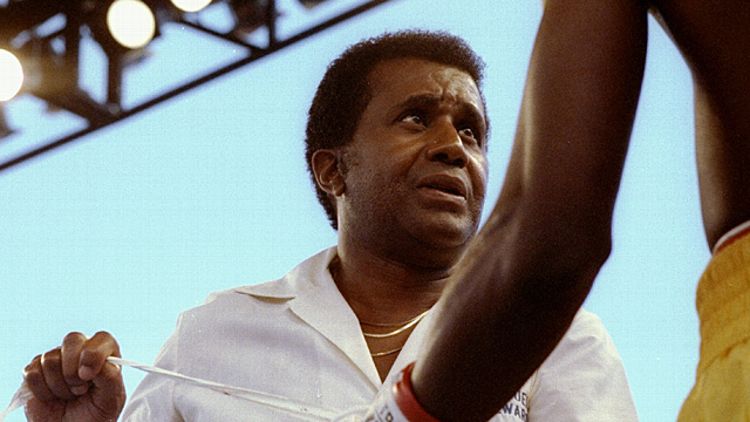 It was too late by the time I arrived at the Montgomery County Boys Club — I’d just missed a historic gym war between two boxers who would eventually be enshrined in the International Boxing Hall of Fame. Thomas Hearns was still in the ring having his headgear removed and Matthew Saad Muhammad (then Matthew Franklin) was sitting on the apron unwrapping his hands. Both were scuffed up, breathing hard and drenched in sweat. While I had no way of knowing at the time, there was another future Hall of Famer in the gym that day: Hearns’s trainer, Emanuel Steward.

When news of Steward’s death Thursday at the age of 68 plunged the boxing world into a state a grief, I couldn’t help thinking back to the spring afternoon in 1979 when I first met Steward. He was warm and friendly, eager to talk about the zipper-thin puncher he had brought to Philadelphia to fight at the Spectrum. Hearns was riding a 17-fight knockout streak and was expected to make local journeyman Alfonso Hayman number 18, but it didn’t turn out that way. Hayman lost every round on every card but was still standing at the final bell. The Philly faithful booed Hearns and cheered Hayman, but Steward was unfazed. He understood that Philadelphia was a lot like his hometown of Detroit — a shot-and-a-beer city passionate to a fault when it came to its sporting heroes.

Hearns wasn’t Steward’s first titleholder; that honor belonged to Hilmer Kenty, who stopped Ernesto Espana to win the WBA lightweight title in May 1980. Less than eight months later, Hearns almost decapitated Mexican slugger Pipino Cuevas to take the WBA welterweight title in front of an ecstatic crowd at Detroit’s Joe Louis Arena. By then, Steward’s Kronk Gym, located in the basement of a city-owned recreation center, was a veritable fighter factory, cranking out contenders and champs like a Motor City assembly line. A former amateur boxer, Steward got his start working with amateurs, and when the time was ripe he introduced the best of them to the professional ranks with uncommon success. The parade of champions rolled on and on. Milton McCrory, Jimmy Paul, and Duane Thomas all won titles before the end of 1983. Eventually the Kronk brand grew to the point where Steward opened a franchise in Tucson, Arizona.

He often said that he was just as proud of the job he did managing his fighters as he was training them, but aside from his business acumen and his technical understanding of the sport, another quality made Steward special. Emanuel had that rare ability to make everybody he met feel special. He had a knack for remembering something about you that linked you to him in a personal way. Decades after the fact, he enjoyed reminding me of the voice-overs I used to do for an obscure and long-defunct UHF television show called Cavalcade of Boxing. He was a boxing writer’s best friend, as available to a cub reporter as a major media outlet, generously giving his time and virtually always returning phone calls. It was that same giving quality that endeared him to his fighters.

“I stayed in Detroit at one of Emanuel’s homes at the tail end of my career and he made me part of his family,” recalled former WBA light heavyweight titleholder Eddie Mustafa Muhammad the day Steward died. “We had a great time together. Emanuel liked to cook, but he was more than that; he was [a] chef and very proud of his cooking. We used to sit around talking about boxing and he talked a great deal about the art of self-defense, hitting and not getting hit. A lot of the things he taught me I’ve passed on to the fighters I’m training. More than anything else, Emanuel was a man of integrity.”

I was ringside on April 15, 1985, the night Marvin Hagler decimated Hearns in one of the most savage fights of the gloved era, and I can’t forget the look of anguish on Steward’s face as Tommy fell to the canvas under Hagler’s finishing barrage. It was the look of a man who had witnessed his son’s tragic downfall and couldn’t tear his eyes away from the heartbreaking aftermath. But Steward bounced back — resilient as ever — and stayed with Hearns to the end, even though he must have wished the curtain had come down on the Hitman’s long good-bye much sooner.

As Kronk’s original stars began to fade, Steward took on the role of a hired gun, traveling from town to town to ply his trade. He became the trainer of choice for flagging headliners in search of new answers to old problems. When Riddick Bowe took the heavyweight championship away from Evander Holyfield in 1993, it was Steward who guided Holyfield to victory in the rematch. When Frankie Randall handed Mexican icon Julio Cesar Chavez his first loss in 1994, Steward helped Chavez win the rematch. Not all of his reclamation projects were major players. Shortly before his death, Steward resurrected the career of Cornelius “K9” Bundrage, a journeyman from The Contender in need of a payday and running out of time.

Perhaps the finest feat in the Wizard of Kronk’s bag of tricks involved the old switcheroo. After training Oliver McCall for his upset knockout of Lennox Lewis, the defeated Englishman hired Steward to train him. While working with the 6-foot-5 Lewis and, later in his career, Waldimir Klitschko, Steward showed a touch of genius, becoming the first trainer to teach truly big men how to fight tall. After decades of lumbering heavyweights such as Jess Willard and Primo Carnera, Steward transformed the athletic but unrefined Lewis into the best heavyweight of late 1990s and early 2000s.

I visited Lewis at his Pocono Mountains training camp in June 2003 when he was getting ready for what turned out to be his final bout, a blood-smeared TKO of Vitali Klitschko. A lot of people mistook Lewis’s shyness for arrogance, but once he knew you and let his defenses down he was a sociable-enough fighter. After much gentle prodding from Steward, Lennox, who was not yet in prime condition, finally agreed to pose for photographs after the day’s work was finished and darkness enveloped the wooded hills outside the gym. As I watched Emanuel bandage Lennox’s hands, our conversation strayed from boxing to politics. The man who taught men to inflict severe bodily harm on others voiced his disgust with the war in Iraq, shaking his head in dismay at the folly of it all. The carnage in the Middle East was beyond comprehension for somebody who had launched his career trying to save young men from the lethal streets of Detroit.

After learning of Steward’s death, boxing photographer Will Hart called me to commiserate, and we talked about old times with Emanuel. He told me about a package he received in the mail many years ago: “I had met Manny when I went to Detroit to cover a fight in 1986, and about two weeks after I returned, I got a size 38 Kronk boxing team jacket in the mail. It was the gold-and-red vintage one with blue letters and leather sleeves. It even had my name embossed on it. At first I couldn’t figure out why he had sent it, but then I remembered telling him that it was my birthday. When I wore that jacket people actually stepped aside to let me pass, figuring I was some kind of badass. After much searching, I dug it out of the closet tonight. It was a struggle getting it on, but even more trouble getting it off, because I’d gone from a size 38 to 42. But if it still fit I’d still be wearing it.”

I too was the recipient of many acts of kindness from Emanuel. The last one came during my final year as editor of The Ring magazine. He wanted to tell me how much he liked a piece I’d written, but said that he had lost my number and didn’t know how to get in touch with me. So he went out of his way and called my colleague Eric Raskin to get my number. When we finally spoke, what he said meant more to me than any paycheck I earned in my career.

If I had a Kronk jacket, I’d find a way to make it fit.

Nigel Collins is a boxing analyst for ESPN and the former editor-in-chief of The Ring magazine.