Draw It Up: Tim Tebow and the Two-Point Conversion

Through three quarters, Denver quarterback Tim Tebow and his Broncos put in an ugly, scoreless performance against the previously hapless Miami Dolphins. Worse, Tebow, the fan favorite, had been outplayed by Miami’s quarterback, former cast-off Matt Moore. It was not the kind of display that would silence Tebow’s doubters — at least not until the fourth quarter. That’s when Tebow (and the Broncos) rallied in the final minutes to tie the game, which they eventually won on a 52-yard field goal in overtime. It was an odd victory — but it was a victory, nonetheless.

Here’s how Tebow and the Broncos pulled off a two-point conversion to force overtime.

On the play, the Broncos lined up in a no-back formation, with four wide receivers and a tight end or H-back lined up to the right and off the ball. Apparently, the play from the sideline was a run left, but — in maybe the most encouraging sign of all — Tebow actually called an audible himself at the line and changed the play to a different run to the right: The Broncos would run the “QB power” play. 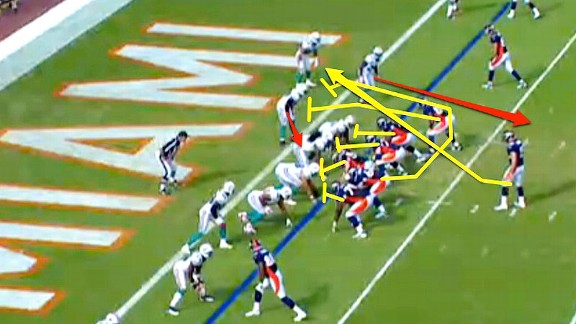 Against the Broncos’ no-back set, the Dolphins lined up with four linemen aligned tight inside and several linebackers to the Broncos’ left side, but with few bodies to their right. This numbers advantage was the tip-off for the audible. The play call was simply the old “Power O” run play that every NFL team uses, except with the quarterback as the ball carrier instead of the running back.

On the play, the blockers on the right side were to “down block,” meaning their assignment was to take the man over them and crush him to the inside as they worked up to block the linebackers. The left guard’s job was to pull and lead to the right side. It turned out he didn’t really have anyone to block (as we’ll see), and sealed the play to the inside, but normally, he’s instructed to be a true lead blocker on a linebacker. Finally, the other problem for the Dolphins is that they have an outside blitzer who ends up simply running right by Tebow. His job was to blitz outside, and to blow up any sprint-out or roll-out passes to that side, but he should have squeezed down to be a better threat to tackle the quarterback on the inside run. 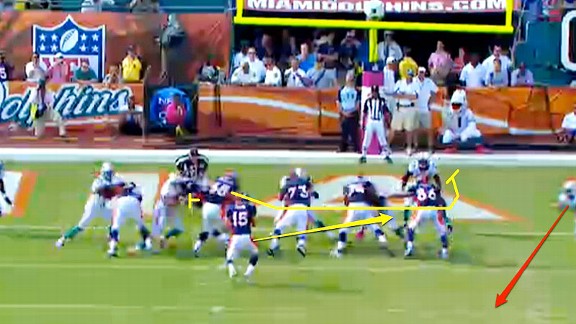 Just after the snap and viewed from behind, you can see the problem for the Dolphins: Everyone is squeezed inside. Indeed, after the game, many commentators wondered how the Dolphins were not looking for the quarterback draw. But that was the problem, as Miami coach Tony Sparano confirmed after the game: They were looking for the draw, which typically is a run up the middle where the linemen fake pass for a count before blocking. That’s why Miami’s defensive linemen had squeezed inside and the linebackers all looked that way too. What they weren’t looking for, however, was the quarterback power, and that’s what got them. In the image above, you can see the clear path for Zane Beadles, the pulling guard. Also, the one tricky block on the play is by the center, who must cut off the defender lined up over the guard; he executes this block and the backside is sealed. 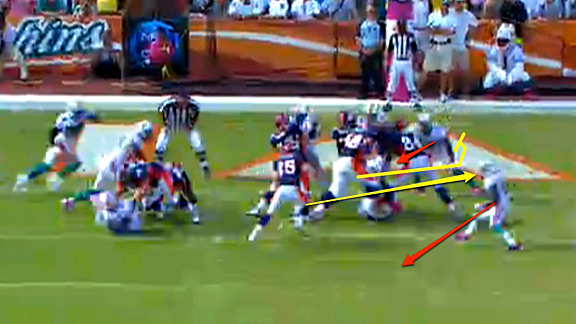 Tebow further helps the play by running his path like a running back would, taking his first steps straight upfield to set up the pulling guard before running behind his envoy. And again, you can see here that the Dolphins get themselves out of position, being overly concerned with the sprint-out pass and the draw up the middle. This is a subtle shift in the quarterback run game, but one the NFL hasn’t seen much of. Indeed, this is a play right out of the playbook of Tebow’s old Florida coach Urban Meyer, who was in attendance Sunday. 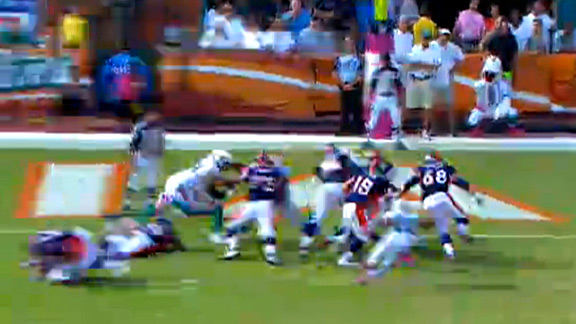 Of course, even with good design, players still have to execute, and the Broncos make sure that the play will result in the two-point conversion by absolutely crushing the Dolphins defenders inside. Other than the unblocked outside rusher, not only were the Dolphins looking for the wrong things, they were also physically manhandled. The aerial view shows the running lane. 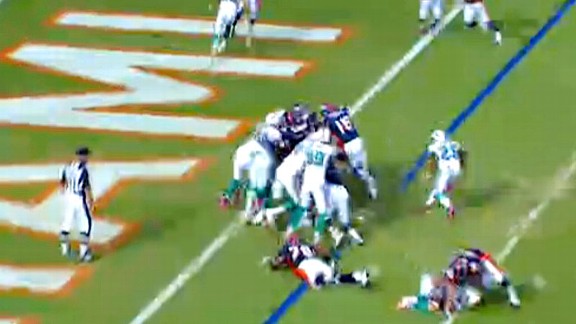 It was a great play, a gutsy audible, and it was enough to help propel the Broncos to victory against the Dolphins. But it was also right in Tebow’s old wheelhouse, and does little to sate Tebow’s many vocal detractors; they have plenty to point to. And of course, Tebow won’t become a great NFL quarterback simply by running the off-tackle power play. Indeed, while commentators like to talk about his throwing motion — an important but largely overblown topic — I still have concerns about related (but far more important) issues: his sense of timing and anticipation as he goes through his progression of receivers. Since roughly his junior year in college, his anticipation, rhythm, and timing in the pocket seems to have regressed, and he must shoulder increased responsibility in the NFL for identifying blitzes and putting his team in position to succeed. Whether he can make those strides, we’ll have to see.