Draw It Up: Giants’ Counter Scheme 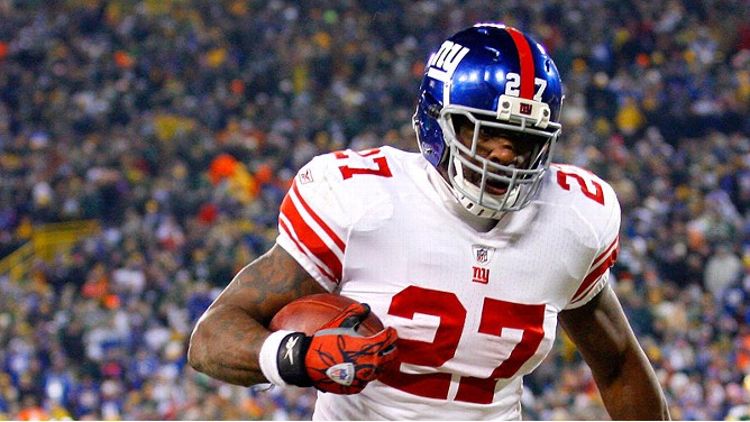 The focus for the Super Bowl has been, fairly rightly, on the quarterbacks — namely Tom Brady and Eli Manning. There’s a good chance the game will be high scoring, especially given that both teams’ defenses have had their share of lapses. But for either team to have the success they hope to have, their running games are going to need to be a big part of that. This is especially true for the Giants.

While Eli Manning and his receivers, particularly Hakeem Nicks and Victor Cruz, have been the most consistent part of the team this year, they have their best success when the running game is rolling. Indeed, the Giants have all the makings of a high-flying passing team, except that their coach, Tom Coughlin, is at his core a run-first guy. All too often this season, however, that has been easier said than done, as the Giants finished dead last in total rushing yards per game and, even more importantly, average yards per run play. But New York has played better in recent weeks, and their running backs (Ahmad Bradshaw and Brandon Jacobs) are the same two who helped the Giants accumulate the most rushing yards in the NFL in 2008.

Given their proficiency in the passing game this season, the Giants’ best running plays in recent weeks have come from Bradshaw on “zone” running plays, which gives the speedy Bradshaw the ability to find the gaps in the defense wherever they are and exploit them. But the Giants, like Coughlin, still want to run the power run game, and when they do that they still turn to the mercurial Jacobs.

Jacobs is built like a power back — all thighs and hips and shoulders — but all too often this year he has tried to dance past defenders. Yet he’s vowed to run “nasty” in the Super Bowl. If he’s going to do so, I expect to see a heavy dose of “counter” schemes from the Giants against the Patriots. When New York faced the Falcons a few weeks back, the Giants showed a great example of exactly what I expect them to (try) to do versus the Patriots on Sunday. 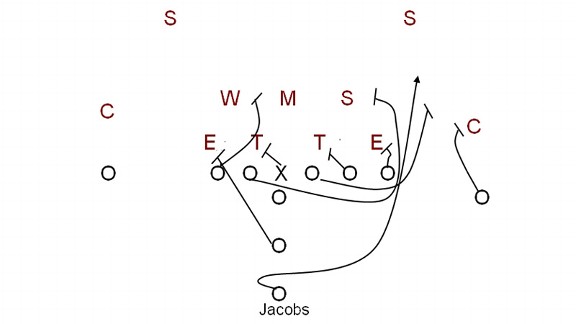 On the play, Jacobs, along with most of the offensive line and quarterback Eli Manning, began to their left in order to move the Falcons defense in that direction. But this was merely a setup: After a step to his left, Jacobs reverses course and heads back to his right, and he has help. Guards Chris Snee and Kevin Boothe both “pulled” to the right to create an escort for Jacobs into the secondary. While they did that, the rest of the line stepped down to “pin” the defenders inside. Put together, the Giants were able to freeze the overaggressive Falcons defense to one side and seal them off while Jacobs, Snee, and Boothe headed to the other side in what can only be described as one of the largest three-man fast breaks imaginable. The result was a 34-yard gain, something the Giants — and Jacobs in particular — have not had enough of this season.

The problem for the Giants comes when these plays get too predictable. If the defense knows it is coming, they don’t react as well to the fake to one side, and are able to shut the play down. But if Tom Coughlin and offensive coordinator Kevin Gilbride can keep the Patriots off balance and use these plays when they aren’t expecting them, it might be a very good day to be a Giants fan. Indeed, what truly makes this scheme go is after they’ve used it a few times, and then Manning fakes one of these hand offs before rifling a pass downfield to Cruz or Nicks. The Super Bowl has seen a lot of famous one-two run/pass punches — from Emmitt Smith and Troy Aikman to Franco Harris and Terry Bradshaw — and Brandon Jacobs and Eli Manning have a legitimate shot to add themselves to the list.