Draw It Up: Darren McFadden’s Touchdown 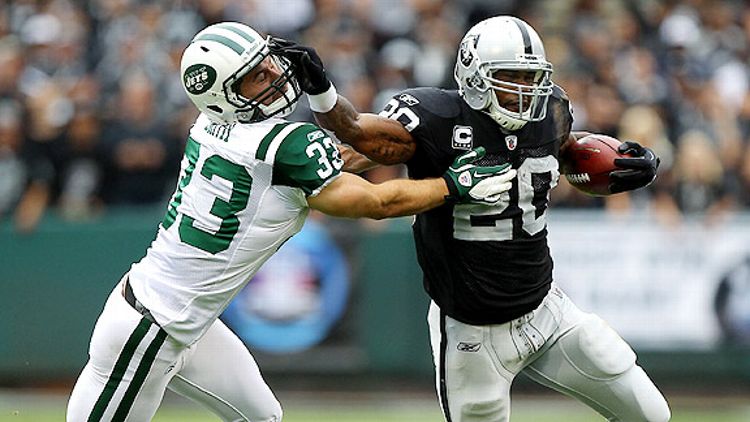 The Oakland Raiders have, over the past few seasons, quietly rebuilt themselves into one of the toughest, most physical teams in the NFL. New players like second-year linebacker Rolando McClain and old ones like Richard Seymour are again making the Raiders one of the hardest-hitting, nastiest teams in the league — the kind of team no one wants to play because, if you face them Sunday, you won’t want to get out of bed Monday morning.

Oakland running back Darren McFadden is also slowly living up to the promise he showed at Arkansas. After modest yardage totals in his first two seasons, McFadden rushed for more than 1,000 yards last season. He’s off to a great start this year, as evidenced by his 171-yard, two-touchdown performance against the New York Jets on Sunday.

The key play for McFadden and the Raiders was his 70-yard touchdown run in the second quarter, which came on the Raiders’ base run play: the inside zone. The theory behind “zone running” is that, given all the multitude of shifts and maneuvers a defense can present — and the many formations offenses use nowadays — you need clear rules to run the ball effectively. The zone allows the offensive line to work together, double-teaming the defensive linemen before sliding off to block the linebackers (the “second level defenders”), while the running back has freedom to find the open crease. Against the Jets on this play, McFadden attacked the interior of New York’s defense before bouncing it around end for the big gainer.

There are different ways to teach the zone run, but the most common is to teach a “covered” or “uncovered” principle. If the offensive lineman is covered — i.e. there is a guy right across from them — there is less “zone” than good old-fashioned football: hit the guy across from you. (There is quite a bit of technique involved, but for targeting purposes that’s the key point.) The “zone” element comes up for offensive lineman who are “uncovered,” — i.e. do not have a defender lined up across from them. Their job then becomes to “zone step” (there is the zone concept) to the side the ball is going to, looking to help double-team a defensive lineman and help out their teammates. Those two linemen will work up to block the linebackers after getting that initial push and movement. The running back’s job is to run to the side the ball is going, usually with an aiming point just outside the offensive guard (the lineman next to the center). He will actually read the defensive line: If his key goes inside, he goes outside; If his key goes outside, he cuts the ball back inside.

The Raiders applied these rules to perfection against the Jets. On the long touchdown run, Jets coach Rex Ryan borrowed a page from his dad’s playbook and used what’s called the “Bear” front, named after the 1986 Chicago Bears defense. (The famous “46” defense Buddy Ryan perfected used a “Bear” alignment but has some other bells and whistles not worth getting into right now.) In the front, the three defensive linemen reduce their splits and line up on the center and both guards, instead of wider over the tackles or tight end. The purpose of doing this is to clog the interior, something Rex Ryan went to because of the Raiders’ strong running attack. To protect the outsides, the linebackers line up outside the offensive tackle and tight end, respectively, while the Jets had two inside “linebackers,” one of them being safety Eric Smith.

Because the Jets used this reduced defensive alignment, the primary job for the Raiders’ blockers under their zone blocking rules was just to fire out against the defenders across from them. McFadden took the snap and attacked the inside, but, in an effort to clog up the inside lanes, something else opened up: the outside. Specifically, because the Jets’ defensive linemen lined up so far inside, the tight end and offensive tackle to the Raiders’ left were free to block Eric Smith, lined up as a linebacker inside, and Bart Scott, who was responsible for contain. The key block was by tight end Kevin Boss, who managed to “reach” Scott and pin him to the inside; Scott’s job should have been to funnel any runs back to the inside where he had help. Instead, McFadden slipped around end and got good blocking from the receivers — and from there he simply outran Antonio Cromartie and the rest of the Jets defense.