Draw It Up: Blount’s Game-Winning Touchdown 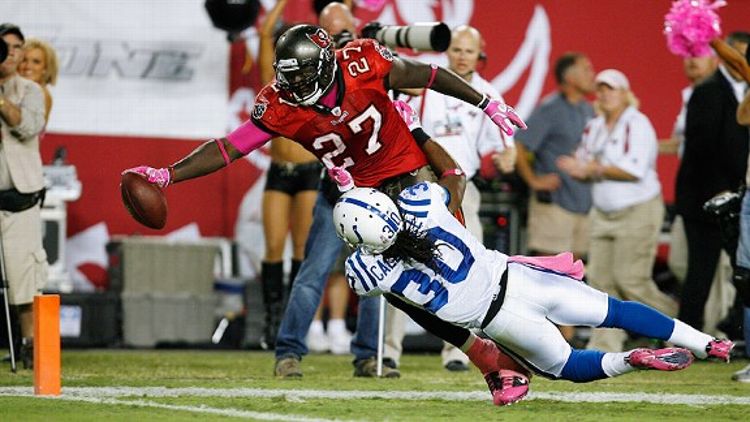 LeGarrette Blount is a great football story. The undrafted rookie was cut by the Tennessee Titans, then signed with the up-and-coming Tampa Bay Buccaneers and ran for over 1,000 yards in his rookie year. This week, he ran for 127 yards and the game-winning touchdown on Monday Night Football. It’s really the perfect story. Perfect, that is, if you leave out that infamous Boise State incident, which led to a lengthy suspension in college. But since joining the Bucs, Blount has been everything anyone could have asked for (at least on the football field). So let’s just focus on that game-winner for now.

The Bucs hadn’t played well against the feisty Indianapolis Colts; at one point they trailed 10-0, and later fell behind 17-10 after long touchdown passes from Curtis Painter to Pierre Garcon. But the Colts’ roster was so depleted, it seemed clear the Bucs would eventually find a way to win.

The game-winning play is one of the oldest plays in football, and is used at every level, from high school to the NFL: the “Power” or “Power O” play. It’s called “power” because the goal for the offense is to get extra blockers to the point of attack, i.e. where the ball is going, to simply outnumber the defense. (It also sounds tough, and coaches like that.) There’s more strategy on why teams like to go to the power play on a given down and distance as opposed to a zone run (as we saw this season with Darren McFadden), but there’s no question it was the better look against the Colts on Blount’s 35-yard touchdown run.

The Colts are a base “4-3” team, meaning four defensive linemen and three linebackers, but on this play, they essentially lined up in a true eight-man front in a 5-3 look. They did so by bringing safety Antoine Bethea down to line up over the tight end. The purpose of this was to cover up as many Tampa Bay blockers as possible so Indy’s three linebackers could roam and make the stop. To counteract this, the Buccaneers ran “power.” This meant that the offensive line and tight end blocked “down” … in other words, because the run was to the right, their job was to collapse everything down to the left — the “down” block is the first block linemen learn in pee wee football, because it works. Because the rest of the blockers are blocking “down,” the strength of the blocking to the side Blount ran to came from two (somewhat) unexpected sources: the fullback, Erik Lorig, and the left guard, Jeremy Zuttah. Lorig’s job was to “kick out,” or to block from the inside-out, the last defender on the line of scrimmage, while Zuttah’s job was to pull around to the right side and block the first linebacker who appeared, in this case, Indy’s Pat Angerer.

That’s the base power play. But three other elements made this play a big touchdown for the Bucs and Blount. First, Greg Olson, the Bucs’ offensive coordinator, was able to completely seal off the Colts’ defensive front by motioning his wide receiver, Arrelious Benn, inside. Benn blocked — no, crushed — Bethea, running him basically into the center of the field. Bethea’s job was to funnel run plays inside to the linebackers; when he didn’t, the Colts already had a major problem. Second, the Bucs’ right guard, Davin Joseph, made a fantastic play. The guy who often kills you on the power play is the backside linebacker, because you don’t necessarily have someone who can work up to block him. (On paper you might, but it’s difficult.) Joseph managed to help his teammate with one block and then shoot up to block the linebacker — not much of one, but enough — which was key to breaking Blount for the big run. And finally Blount made the play go with excellent vision, agility, and burst. Based on the blocking, he angled his run outside, but he took advantage of Joseph’s play and made it count, and of course made a great effort to get in for the touchdown.