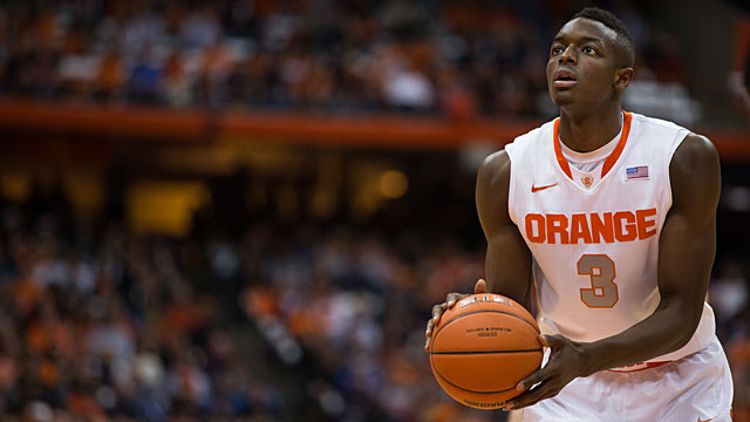 You’ve heard more than enough about this cohort of collegiate freshmen, whose potential greatness has convinced the NBA’s lottery-oriented general managers to infect their own players with West Nile virus. But the sophomore class has a few guys with absurd, freakish, ridiculoid athleticism, too.

Meet Jerami “Grantland” Grant, the second-year forward on second-ranked Syracuse, who has become one of those rare players who produces several cataclysmic “WAIT THAT SHIT DIDN’T JUST HAPPEN” events per afternoon. He’s 6-foot-8, leaps into the rafters, and has Inspector Gadget arms that can rip the rims off of Apollo’s chariot. As a fun trivia fact and proof of his athletic lineage, Jerami is the son of former Washington Bullet Harvey Grant and the nephew of Horace. Good genes!

In Sunday’s nooner against a lively St. John’s team, Grant provided a couple glimpses into why he’s predicted by draft forecasters to slip into the late lottery. In the first half, he bounced into the lane, elevated off what appeared to be the wrong foot, and viciously piked the ball on someone’s head anyway. It wasn’t premeditated, but instead a humiliation of convenience. “I’m here. You’re here. We might as wedge this basketball down your gullet. Sorry, hoss.”

Late in the game, as the Red Storm’s admirable comeback began to stall out, JaKarr Sampson soared in from the baseline with the intention of delivering a rejuvenating jam. Instead, he encountered Jerami Grant and two extend-o pipe-cleaner arms. The meeting took place about a foot above the rim, and Grant volleyball-snuffed the rock backward.

You’re not supposed to be able to block shots like that, and really, who even tries?

These are things that Grant does frequently.

From a long-range perspective, whether Grant can successfully become a Kawhi Leonard/Paul George–type of small forward likely depends on his ability to drain 3s from NBA range (he’s shooting 40 percent from deep this season, though he attempts less than one every two games). Even now, on a deep Syracuse squad where he’s neither the leading scorer (senior C.J. Fair) nor primary playmaker (freshman Tyler Ennis plays like a young Andre Miller), he’s currently delegated to pyrotechnic sixth-man duties. But for the time being, enjoy the highlight reel.