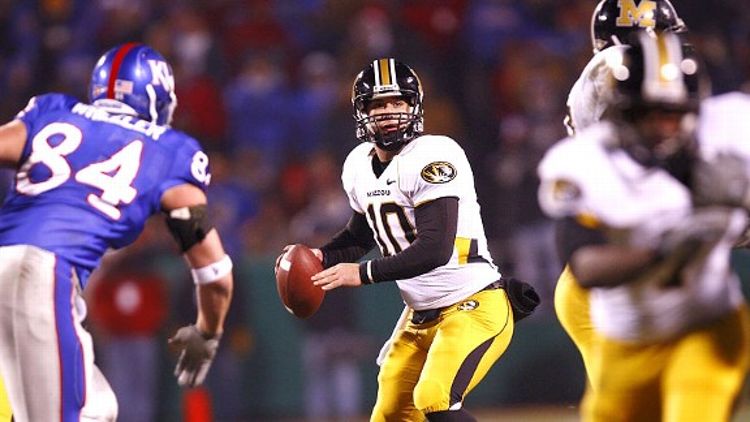 During last year’s realignment shakedown — as Nebraska joined the rest of the Big Ten in the late 1980s and the Big 12 looked to be collapsing — it seemed as if Missouri might be one of the BCS schools left at the altar. While others cozied up to contingency mega-conferences, a team with three 10-win seasons in the past four years was given a hard “no” from a conference that includes Indiana. Mizzou looked like they were destined for the Big East until Texas and Oklahoma decided to show mercy over the rest of the Big 12 and keep the conference intact, ending realignment talk…for about a year.

When Texas A&M decided to leave the Big 12 in early September because it was tired of listening to mom and dad talk about how great its older brother is, the shuffle was on again. Texas and Oklahoma pitched the Pac-12. Syracuse and Pitt headed to the ACC. Things were happening!

Luckily for the Big 12, the Pac-12 said it had no desire to expand further, and talks to stabilize the current conference began in earnest. The schools came to terms on both of its major sticking points — more extensive revenue sharing and restrictions on how Texas could use its Death Star of TV rights, the Longhorn Network.

Neither proved enough to deter Missouri’s interest in leaving. Rather than stay subject to the whims of Texas and OU, Mizzou sought out stability, and they sought it in the form of the SEC. The school’s chancellor Brady Deaton left his post as the chairman of the Big 12’s board of directors, and MU’s curators granted him the right to move the school from the Big 12. Two weeks ago, a New York Times report quoted a university official who said that the move was “inevitable and imminent.”

Now that it seems certain Mizzou is headed south, how do the Tigers fit in the SEC?

Culture: Missouri’s identity crisis stretches back about 150 years, when its residents couldn’t decide which team they wanted to play for during the Civil War. Border State Personality Disorder has extended to the present day, where Missouri is a state home to two of America’s largest 60 cities, and is also is a place known for corn and cotton, two crops usually identified with two different regions of the country. I had a roommate from St. Louis and grandparents in Malden, and I still contend that this map telling me they lived in the same state is wrong.

A place where Missouri is definitively not Southern is in its football culture. Columbia has been home to its share of great crowds in the last several years — Nebraska in 2007 and last year’s win over No. 1 Oklahoma come to mind &#8212 but where Mizzou football ranks in the lives of students and alumni doesn’t stack up to its new SEC counterparts. When Alabama law school grad/season ticket holder/tailgater Josh Segall was recently asked by a reporter in Columbia if Mizzou fits the culture of the SEC, he responded with, “I don’t know; do you know anyone who re-scheduled their wedding because Missouri was playing a home football game?”

Academics: Missouri is a strong fit academically for the SEC. Ranked as the 90th-best university in the country, Mizzou would be the sixth-highest rated institution of higher learning in the conference. Its average SAT score of 1050 is right in line with many of the SEC’s public universities, and the school boasts a strong student to faculty ratio.

Basketball: Although moving to the SEC would be bleak for their football future (see below), Mizzou and Texas A&M would compete instantly in basketball. Believe it or not, before Quin Snyder came to town, Missouri was a basketball school. Mike Anderson’s 40 Minutes of Hell provided a brief resurgence with a trip to the Elite Eight in 2009 before he jumped to the SEC, to become the coach at Arkansas. Membership in the conference could create a natural rivalry with Anderson’s Hogs, even if the man that replaced him could barely win half his games at his last job.

Football: The stat Missouri fans have trumpeted since this move got legs is that Mizzou has won its past five games against the SEC. As friend and ESPN.com Big 12 blogger David Ubben pointed out to me, two of those games were against an Ole Miss team coached by Ed Orgeron — whose teams finished a combined 7-17 in those years — the other was in a bowl game against a coach-less team during the best season in Missouri history.

That game, a 38-7 win over Arkansas and Darren McFadden in the Cotton Bowl, is what former Mizzou cornerback and current Jacksonville Jaguar Kevin Rutland pointed to when asked if he thought Mizzou could compete in the SEC.

“When you see LSU, when you see Alabama, they pound the ball,” Rutland says. “I don’t think teams in the SEC have seen a spread offense like we have. So there will be plusses and minuses (to leaving), but I think we’ll fare well.”

The spread offense was designed as a way to account for disparities in talent, and nowhere would that be more important for Mizzou than in the SEC. It remains to be seen whether that type of game came succeed in the SEC, where letting fast, powerful defenses tee off on the quarterback might be a dicey proposition. SEC speed is not a fabrication, and a schedule featuring Alabama, LSU and Auburn might mean a long wait before Mizzou comes near another big-time bowl (or any sort of bowl).

Rutland, like many of Missouri’s best players in recent years (Chase Daniel, Sean Weatherspoon, Danario Alexander), is a Texas guy passed over by the state’s football powers. Coach Gary Pinkel has made his living picking up undervalued talent from the country’s most football-rich state, and a move to the SEC would bring Mizzou’s Texas opponents and Texas bowl opportunities to one.

For Rutland, the hardest part of an SEC move is losing college sports’ most underrated rivalry. The hatred between Missouri and Kansas didn’t come from battles over recruiting pipelines (I’m looking at you, Michigan-Ohio State); it came from actual battles fought between factions from each state during the 1850s and 60s.

“Something has to be done with that,” Rutland says. “I can’t imagine not seeing that game, or if at all possible, attending that game. I’m here in Jacksonville, and I’m trying to describe to some of my teammates that KU-Mizzou game at Arrowhead (Stadium in Kansas City), and it was like an experience that I’ve never had. Taking that out, that rivalry is way too deep to let go.”