Doc Halladay’s A-Game Rides Off Into the Sunset 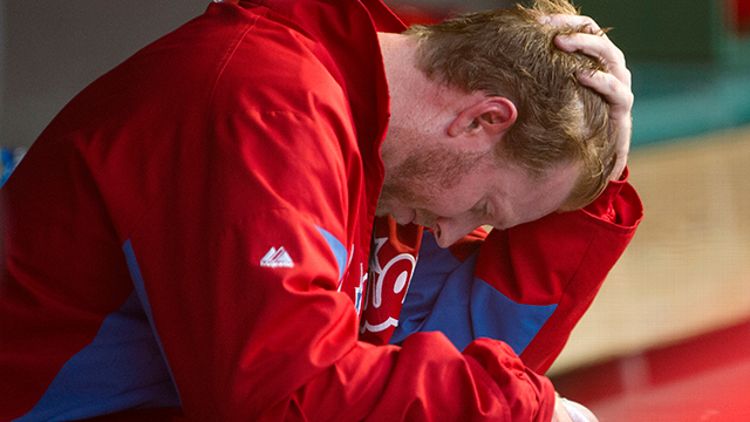 For most of us, it happens gradually. You lose a step, start forgetting to file your TPS reports. The attaboys you got when you were young and hungry start to fade. Years and years of erosion, until one day, your boss calls you into his office. You’re not fired, exactly. But here’s a nice, early retirement package. Do the right thing and take it now. Your slow, inevitable march toward irrelevance has finally reached its end.

Baseball players don’t always have that luxury. The end can be merciless, especially for pitchers. One day you toe the rubber and find you can’t crack 90 anymore. You’re throwing meatballs, and the other team is teeing off. Finally, mercifully, skipper takes the slow walk out to get you. You look back at the scoreboard and see a big, fat nine staring back. Your shoulder is shooting waves of pain through your body. Years and years at the top of your game, and the top of the league, all washed away with one excruciating beatdown.

Roy Halladay isn’t necessarily done in the literal sense. He’ll very likely pitch again. But watching the sad-sack Marlins batter Halladay for nine runs in 2⅓ innings Sunday, with their one dangerous hitter on the DL no less, reinforced what we’ve all been thinking for a while: The Doc we knew is gone. It took Juan Pierre, Marcell Ozuna, Greg Dobbs, and Adeiny Hechavarria to read him his last rites.

To understand how we got here, to the point where Halladay owns an 8.65 ERA and as many hit-by-pitches and half as many walks in seven starts than he had in all of 2011, we need to go back in time. From 2002 through 2011, Halladay led the league in innings pitched four times, and in total batters faced three times. His 22-win, 266-inning, 1,071-batters faced 2003 season looks like something from Bob Gibson’s prime, not something you could possibly see in pitching’s modern era, where five-man rotations are universal, pitch counts are meticulously tracked in every dugout, and managers can’t wait to warm up setup men, and the setup men to setup men, and still more setup men. From 2006 through 2011, Halladay threw a major league–high 1,414⅔ innings (an average of 236 a season), while facing 5,679 batters (14 fewer than MLB leader CC Sabathia). He added five playoff starts in 2010 and 2011, 38 more innings, and 143 more batters to tack onto his arm’s sky-high odometer.

All of those innings by themselves are evidence of nothing, other than Halladay at his best was both a durable and supremely talented pitcher. During his 10-year prime, Doc won two Cy Young Awards, finished in the top five in voting five more times, made eight All-Star teams, posted a park- and league-adjusted ERA 33 percent better than league average (tied for no. 1), with fielding-independent numbers 29 percent better than league average and well above anyone else in that 10-year span with anywhere near as many innings pitched.

But even if we can’t prove that all those innings eventually wrecked Halladay’s shoulder, we know that something eventually caught up to it, whether it was age, heavy use, or both. The first signs of trouble surfaced early last season, when the Philadelphia Inquirer reported a 2 mph drop in the velocity on his cutter, Halladay’s go-to pitch. That velocity didn’t make a lick of difference at first. Through his first nine starts of the season, Halladay struck out 50 batters, walked just 12, and ceded just three homers in 64⅓ innings, good for a 3.22 ERA and an opponents’ line of .235/.275/.328. Other than one rough start in Atlanta, Halladay went seven innings or more every time, allowing three runs or fewer every time.

But things unraveled from there. First, he gave up five runs on nine hits with two homers against the Nationals. Ten days later, Halladay then lasted just two innings, getting removed with what the Phillies generically called “right shoulder soreness.” He hasn’t been the same since. Halladay spent more than seven weeks on the disabled list, with what was eventually diagnosed as a lat strain in his shoulder. Counting his two pre-DL starts, Halladay’s final 16 starts of the 2012 season went like this: 92 innings, 99 hits, 15 homers, 5.38 ERA, with opponents hitting .278/.326/.461.

Though spring training stats can be misleading, in Halladay’s case they were telling. Having avoided surgery to repair his damaged shoulder, Halladay showed up for Grapefruit League play with a sub-90 mph fastball and miserable results: 21 hits, nine walks, and a 6.06 ERA in 16⅓ spring innings. He then opened the regular season with two horrific outings — a five-run whacking against the Braves in which he didn’t make it out of the fourth inning, and a seven-run pasting by the Mets. Halladay’s next three starts appeared to offer hope, with just four runs allowed in 21 innings. They now look like fool’s gold, given what happened next, with the Indians dropping eight on him April 30, followed by that goring by the Marlins. The main culprit for those two implosions, and the rest of Halladay’s 2013 struggles, was his failing cutter, which dropped sharply in both velocity and effectiveness compared to his glory days. His fastball wasn’t much better:

Turned out Halladay’s shoulder had been bothering him since after his six-inning, one-hit effort against the Pirates on April 24. He hit the DL again, this time with shoulder inflammation, and no timetable for his return. If all of this seems abrupt, Halladay can take cold comfort in knowing that he’s not alone. A week from his 36th birthday, he’s following a script that’s sealed the fate of many other star pitchers before him. Two of the most apt comparisons are Kevin Brown and Jim Bunning.

Bunning posted elite numbers in his age 33, 34, and 35 seasons, racking up no fewer than 7.8 Wins Above Replacement in each of those three seasons, according to Baseball-Reference.com, while averaging more than 300 innings pitched a year. He missed time each of the next two seasons, posting WARs of -1.4, 0.6, and 0.3 while failing to top 160 innings even once. He finished his career with one more solid year (3.1 WAR in 1970) before washing out of baseball with an awful final season that saw him produce -2.0 WAR.

Brown produced big numbers in his age 31 through age 35 seasons, with at least 6.2 Wins Above Replacement in all five years and seven-win seasons four times. In his age-36 season, Brown pitched well (3.1 WAR) but, because of injuries, made just 19 starts. The last four years of his career were wildly erratic, with two above-average years and two sub-replacement-level ones.

Pedro Martinez, Dazzy Vance, and Gaylord Perry rank among the top-flight pitchers who also lost it at or near their age-36 seasons, although Perry managed to hang on as a fringe pitcher well into his 40s.

Halladay can take a little more comfort in knowing that one day, Cooperstown will come calling. His career win total stands at 201, which might seem low at first glance. But a closer look at the all-time leaderboard shows plenty of pitchers making it to Cooperstown with fewer wins, including Sandy Koufax, Jack Chesbro, Ed Walsh, Rube Waddell, and Vance. Moreover, we can’t treat win totals the way we have in the past, given the five-man rotation is still relatively new by MLB standards, thus making it unfair to compare Halladay to starters from the ’60s and earlier.

Using a more sophisticated metric like Jay Jaffe’s JAWS, Halladay’s numbers (65.3 Baseball-Reference WAR, 58.3 JAWS) look similar to no-doubter selections of the past such as Bob Feller, Jim Palmer, Juan Marichal, and Carl Hubbell. If he can manage even one or two more semi-productive seasons from here, he’ll nudge comfortably up to the average standards achieved by the 57 pitchers already in the Hall of Fame. All that plus a 10-year stretch in which Halladay was, simply, peerless.

If this is really it for the Doc Halladay who dominated the game for a decade, we can gain our own measure of comfort that his legacy won’t be tarnished. Just as people remember the Willie Mays of the 1954 World Series and not the one who stumbled to the finish line with the Mets, so, too, can we reminisce about Halladay as the pitcher who burst onto the scene with a near-no-no as a rookie, a perfect game years later against the Marlins, and the signature moment of his career, his scintillating no-hitter during the 2010 NLDS. The Reaper might be coming for Halladay, just as it will for the rest of us. But when he does call it quits, Halladay will leave knowing he once held that rarest of titles: the best pitcher on earth.

Much of the research for this article was provided by ESPN Stats & Info.

Life-Changer: How a Few Bad Greens Made Derek Ernst's Career