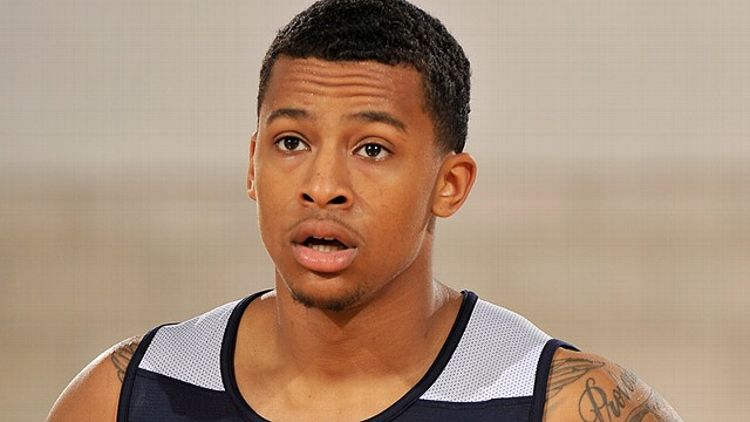 Trying to Find a Balance

To say Trey Burke has struggled during his first few games as a pro might be putting it mildly. Though it’s obviously just a short stretch of games, all the aspects of Burke’s game that have brought concern — specifically a shot-happy approach and inability to finish at the rim — were on full display during the past week. Against Indiana yesterday, Burke was just 3-of-15 from the field; that raised his shot total to 42 for the week, the most of any Utah player, despite the young guard sitting out one of the four games. For Burke, finding a better pass-shot balance must be priority no. 1. Against longer, taller defenders and more sophisticated schemes, Burke won’t ever be the same dominant scorer he was in college. Having trouble finishing against a defense anchored by Miles Plumlee isn’t the most encouraging sign. Burke’s poor 3-point shooting both yesterday and this week is slightly fluky (it’s highly unlikely he’ll continue shooting 6.7 percent), but he still must learn to pass up semi-decent looks in order to make simple passes out of isolations and pick-and-rolls. Getting the ball (and defense) moving has far more value than Burke pulling up from 19 feet for a jumper or barreling toward the rim and flinging up a wild shot.

Speaking of shots near the basket, Burke’s problems finishing are going to be very tough to overcome. He hasn’t shown the burst necessary to get by defenders consistently and often ends up having to use tough angles to finish (think Brandon Jennings, though Jennings’s struggles are caused by his build, not speed). Because of his length and some clever touch, Burke can occasionally make it work, but it’s hard to shoot a high percentage near the rim when finishing at such extreme angles. There are some things Burke can do to improve this, like playing with more changes of pace and using his body better to create space from big and small defenders alike, but they are far from quick fixes. After such a disappointing week, the Jazz are hoping that Burke proves capable of making them.

There weren’t too many bright spots for a Nets squad that was utterly dismal this week, but at least the team’s first-round pick, Mason Plumlee, showed some promise on the offensive end. Plumlee has proved to be a solid finisher off pick-and-roll dives and drop-off passes against this better competition, but he’s left some lingering doubts about his ability to score in the post or isolation at the professional level. Plumlee has found the most success when he’s been able to overpower opponents with pure strength, rather than guile and technique. The problem is that, for the most part, the players he’s faced this week aren’t nearly as physically mature as NBA regulars. A post plan based on power likely won’t cut it when the real games start.

Plumlee can work around this by focusing more on his solid face-up game. With a decent skill level and good mobility, he has shown some of the tools necessary to make that part of his offense a productive option in the future. The young Brooklyn big man is, however, missing one vital piece of the face-up puzzle: He can’t shoot. Plumlee has a hitch in his jumper — he snaps his wrist before fully extending his elbow, causing his shot to be more of a flick than a guided motion — that will allow smarter opponents to sag off and dare him to shoot a 12- to 15-footer while making it extremely difficult for Plumlee to get to the paint. If he can improve his shooting mechanics, Plumlee will force defenders to play him tighter, creating better angles to attack both middle and baseline. He can also then play off that jumper, using shot-fake attacks to create even more of an advantage. If can’t improve this part of his game, it could affect his overall value as a player. Without being able to create his own looks, Plumlee will be reduced to generating offense merely by playing off his teammates. Given his middling defensive display this week, it could make the young Nets big man an overall net loss (average offense, subpar defense) whenever he’s on the floor.

The most important key for young players finding NBA success is getting comfortable with an identity that allows them to become the best version of themselves. For Michael Carter-Williams that means embracing the idea that he must base his game around the pass and use his size, handle, and vision to create opportunities for teammates first, looking only to score enough that it keeps a defense honest.

In the first three games, Carter-Williams had that approach reversed. The Sixers guard attempted a whopping 59 shots and his team struggled to compete, losing those contests by a combined 42 points. In the fourth game, Carter-Williams attempted just 10 shots and Philadelphia lost by one to an Orlando team featuring several players that will be in the rotation for its varsity squad next season. Instead of primarily looking to find offense for himself, Carter-Williams attacked the Magic off the bounce or in pick-and-rolls with the intent of creating for his teammates. His pace coming off ball screens was much more deliberate, a major turnaround from the hasty drives that led to wild forays into the paint earlier this week. By controlling his tempo so well off pick-and-rolls, Carter-Williams gave plays a chance to develop, then used his playmaking skills to zip passes all over the court — the most impressive being an overhead skip pass to Justin Holiday for a 3 in the left corner as Carter-Williams moved toward the right wing off a pick-and-roll.

Carter-Williams was by no means perfect. He still forced a handful of shots and had eight turnovers to go along with his nine assists, but the new mind-set is one Carter-Williams needs to fully embrace going forward if he wants to achieve NBA success.