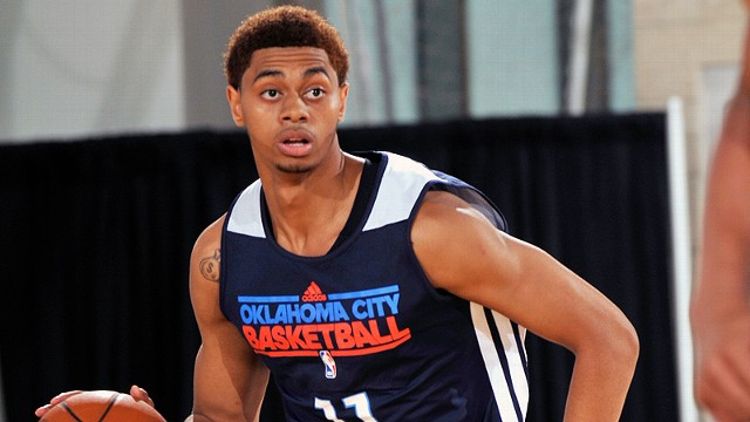 After a few days of NBA-lite here in Orlando, you realize you take for granted some of the brilliant yet subtle nuances of the real thing. One specific example has been ball-screen defense. Or perhaps more aptly put, the shoddy nature of it during the games at Amway Center this week. At the NBA level, the best defenses defend the pick-and-roll like a finely tuned machine. Big men call out the coverage early, giving defenders on the ball plenty of time to position themselves to force opponents to the desired spot on the floor. In summer league, the communication during that defensive sequence is often late, or worse, nonexistent. The defenders here will try to “weak” (force a defender on a middle screen toward his weak hand) or “down” (force a defender baseline) a ball screen, only to watch helplessly as offensive players blow by their haphazard attempts for easy baskets.

This substandard execution isn’t an indictment against the young players here. Most have never seen this level of sophistication and have had merely a few practices together to figure it out. It’s almost a given, then, that pick-and-roll defense should be a mess at times. Grasping the defensive nuances of NBA schemes is a long process. It’s often the primary reason talented young players find themselves strapped to the bench during the regular season, even players with prodigious offensive talent. For that reason, it’s an encouraging sign when a prospect stands out for his ability to effectively defend the pick-and-roll. Big men who are consistent communicators and guards who repeatedly show they can react to the verbal directions stand out.

Those players are often few and far between (both here and next week in Vegas), which is where the really dicey part of the evaluation process comes into play. How much do you factor in what effect broken ball-screen defense has on the offensive results? This gray area is often a huge factor in why certain players (particularly scoring guards) can look fantastic in these summer warm-up sessions before bombing out on the big stage. So when your favorite young prospect uses pick-and-rolls with aplomb en route to a monster 30-and-10 performance this week or next, it may not be quite the feat it seems.

It’s All About Repetition

With his team trailing by nearly 30 points in the waning moments of a blowout loss against the Utah Jazz, new Brooklyn Nets head coach Jason Kidd treated those final minutes as if it were a tense Game 7. Kidd and his staff pressed, played the foul game, and called multiple timeouts in an effort to set up offensive sets. On the surface, it may seem like an obnoxious waste of time, but it’s actually quite smart. Like young players, new coaches and their staffs need time to develop their symbiosis — particularly given the dynamics of this Brooklyn group. Because Kidd is completely new to the profession and will be relying heavily on veteran coaches like Lawrence Frank and John Welch, the Nets’ end-game situations are going to be uncharted territory. What Kidd, Frank, and Welch are doing is trying to use summer league (and likely the preseason as well) to learn how to function when something is actually on the line during a tense regular-season or postseason game. Little things we often take for granted, like who speaks and when during a coaches huddle, don’t just come naturally. How Kidd and Frank work together after a 20-second timeout in order to conceive a play call or strategy is something that needs to be worked out. In general, the more of these situations Kidd can experience when the consequences are irrelevant should help him when the bullets start flying. Fouling down 29 doesn’t win many popularity contests, but it’s a vital step in the process for Brooklyn’s new head coach.

In Game 2 between Oklahoma City and Philadelphia, Thunder youngster Jeremy Lamb stole the show. Lamb had 32 points on a white-hot 10-of-14 shooting and showed off the scoring prowess and shooting touch that his team will need now that Kevin Martin has taken his talents to Minnesota. In a lot of ways, Lamb is Martin-lite. Both players possess excellent outside strokes and are sneaky good at getting to the line. Lamb, however, has displayed some real creativity and skill off the bounce, something that can allow him to create offense out of nothing, but also — as evidenced by his eight turnovers — get him into trouble. Shot selection and defense are still big concerns (in the first game against Indiana this week, Lamb was bullied in the post by Orlando Johnson on multiple occasions), especially when factoring in that the young guard is coming to a team with championship expectations. Still, if Lamb can at least partially replicate Martin’s offensive contributions, it will be a huge boost for a Thunder squad looking to return to the NBA Finals.

Dwight Howard is all the rage in Houston right now, but with his signing (and even before it) the development of Terrence Jones has become a key story line. The Rockets offense hummed along last year thanks to an emphasis on spacing the floor and getting high-efficiency shots — 3s, layups, and free throws — early in the shot clock. The best offensive results for Houston often came when some type of stretch 4 (Marcus Morris and then later Chandler Parsons) was inserted into the lineup. When one of those two played power forward, it brought a player into the frontcourt that could be a threat from behind the arc and also attack the rim off the bounce. Parsons, however, can’t be expected to man that position for an entire season, which is where Jones comes in.

The 6-foot-9, 250-pound forward out of Kentucky has been a beast for Houston this week. Jones has spent the majority of his time living at the free throw line, bullying his way to 29 attempts through three games, including 14 yesterday against Boston. Jones is enough of a threat from the 3-point line (he’s 2-of-5 this week beyond the arc) that defenders must play him for both a shot and drive. When given the opportunity to attack a closing defender, Jones has showed off an ability to attack in straight-line drives with both speed and power to great results. His finishing could use some work, as Jones virtually never uses his off hand (he’s had one right-hand attempt by my unofficial count), and it costs him a handful of layups and three-point-play opportunities. But even with that drawback, Jones has easily been one of the best players here this week and is making a strong case to belong in the Rockets rotation.