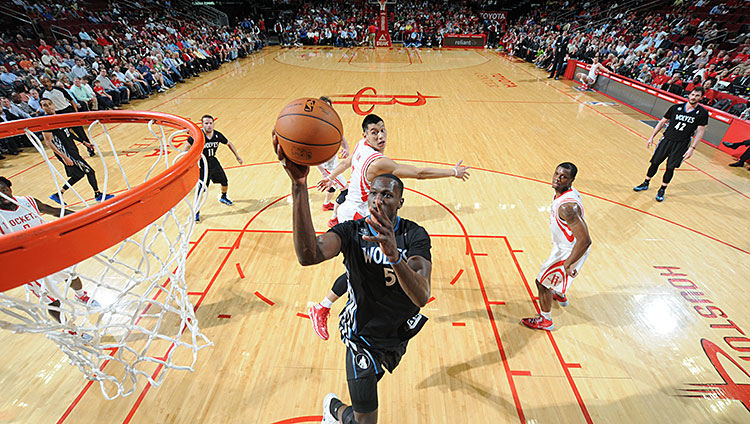 Calling the Minnesota Timberwolves’ Gorgui Dieng a dark-horse rookie of the year candidate is a disservice to dark horses the world over. The fewest minutes per game a ROY winner has ever averaged were the 29.1 averaged by Mike Miller in 2000-01, and Dieng sits well below that mark, at 10.4.

But in the six games Dieng started due to Nikola Pekovic’s and Ronny Turiaf’s injuries, he looked better than Michael Carter-Williams, Victor Oladipo, or any other member of the 2013 draft. Dieng shot 59.2 percent and averaged 12.7 points, 14 rebounds, and 1.2 blocks per game during that stretch — although admittedly, he didn’t face the cream of NBA big men either. Dieng’s free throw percentage skyrocketed from a meager 47.2 percent to a robust 72 percent, while his foul rate dropped from over 7 per 36 minutes to 3.4. For a Timberwolves team that was expected to make a playoff run and now finds itself on the outside looking in at the postseason, the question is: Where has this guy been all season?

Some of the answer lies in what’s behind that foul rate, which also happens to point to the reason for Dieng’s newfound success.

“Being patient,” Dieng said, when asked about the biggest thing he’s learned this season. At first he seemed to be talking about waiting for his shot, but then it became clear the former defensive anchor of Louisville’s championship team was talking about patience within the game itself. “When you’re in the NBA, there are different paces. You gotta flash on defense. I think you gotta be patient when you play in this league because it’s very different.”

Head coach Rick Adelman agreed. “The more he’s played in these last few games, the more calm he is offensively,” Adelman said after what turned out to be the final start of Dieng’s run. “He’s slowed down a little bit.”

It’s a little counterintuitive to think that in the league where basketball is played at the highest level and fastest pace, the key for so many players (especially in the frontcourt)  is slowing down. But consider that these athletes — who have frequently been not only been the biggest players, but often some of the fastest and most agile in comparison to other power forwards and centers — are no longer at such a huge physical advantage in the NBA. Suddenly, overwhelming your opponent is not so easy anymore. The advantages come in the cracks, in changing speed, in slowing down.

After all, it’s not as if Dieng wasn’t getting minutes at different points over the year. In the first game of the season, he got just over 14 minutes — and managed zero points, zero rebounds, and four fouls. Here and there, he was getting chunks of floor time, but casual observers would be forgiven for missing it. For Dieng, it was largely happening behind closed doors.

“It takes a lot of effort, a lot of sacrifice,” he said. “I come out before the people are here and work with A.J. [Price] or one of the coaches. After practice I stay and work with [assistant coach] Jack [Sikma]. I’ve got to do more and more and more to be where I want to be.”

Neither Kevin Love nor Ricky Rubio were Game 1 starters their rookie seasons. Love had four starts early in 2008-09, but didn’t get locked into the starting lineup until 48 games in. “When I was a rookie,” said Love, “I kept thinking, ‘Man, I should be out there playing,’ but I continued to get myself ready.”

Rubio said much the same: “When you’re a rook, sometimes they give you the chance, sometimes not. Sometimes you have to work for it. You have to wait for your time, and when your time comes, you have to take advantage and give the best effort you have. That’s why you’re here.”

It’s easy to point to Dieng’s success as a starter and say Adelman blew it. It’s certainly possible that Dieng was ready to contribute before his torrid run as a starter, but in his three games since returning to the bench, he’s also shown improvement within that role. His numbers have shown a little falloff — which is to be expected going back to playing with the Wolves’ uneven bench — but over 36 minutes, he’s at 19.5 points, 14.2 rebounds, and 1.2 blocks. There are worse things than being overprepared.

We see players on the bench and wonder what they can be learning there, but that’s just a small part of all the work they do. “You can’t figure it out only from watching the game,” Dieng said. “You gotta practice and play the game so you can have a bit of feeling for it.”