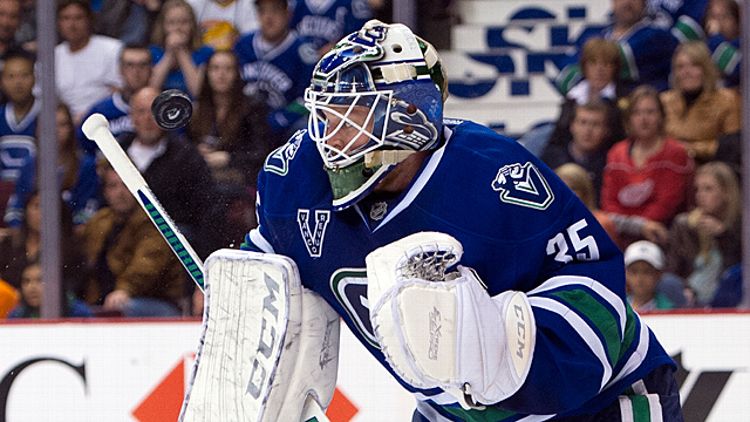 It’s been one of the NHL’s burning questions for the last 14 months: Where would Roberto Luongo wind up?

After losing his job as the Canucks’ starting goaltender to Cory Schneider during last year’s playoff loss to the Kings, Luongo was clearly on his way out of Vancouver. His massive contract was always going to be onerous for a starter, but it was downright impossible for a backup. And so we all waited for the Canucks to move him. And waited. And waited …

He was supposed to be dealt last offseason. Then, it was this year’s trade deadline. And then it was this offseason when he’d finally find a new home, perhaps through a compliance buyout.

Well, we finally have an answer to the question: Luongo’s not going anywhere. Schneider is.

The Canucks pulled a draft-day swerve Sunday by sending Schneider to New Jersey in exchange for the ninth overall pick. (Which Vancouver used to select Bo Horvat.) The deal was the highlight of draft day, a true blockbuster that seemed unthinkable even a few days ago.

It was also a deal that answered one question, but created many more. So here are eight new questions for us to ponder in the aftermath.

Does Luongo even want to be in Vancouver anymore?

Luongo has played the good soldier throughout the entire process, always making a point of supporting Schneider and doing his best to have a sense of humor about the whole thing. But he clearly wanted out, and had reportedly had enough with the Canucks dragging their feet on moving him.

Now that he’s not going anywhere, it’s fair to wonder how badly damaged the relationship between the Canucks and Luongo has become, and whether it can be fixed. Canucks GM Mike Gillis apparently didn’t bother to speak with Luongo before pulling the trigger on Sunday’s trade, though ownership reportedly paid Luongo a visit.

Of course, it doesn’t exactly matter what Luongo wants — with nine years left on his contract, it’s not like he has much choice in the matter. He’s apparently going to be the starter in Vancouver for the long term — whether he wants to be or not. It remains to be seen whether he chooses to bring any drama along with the role.

For what it’s worth, Luongo spoke to TSN on Sunday but declined to do an interview. Host James Duthie described Luongo as “shocked” and said he was mulling his options. That doesn’t sound good, though Gillis was trying not to sound concerned.

Does this make the Canucks better?

In the short term, no. Horvat is a good prospect, but he’s not a guy who’ll be expected to make the team this year. The Canucks are getting old, they haven’t won a playoff round in two years, and now they’ve moved a key player from the roster without getting anything in return that will help them now.

On the other hand, the Canucks needed to get to work on rebuilding a fading farm system, and Horvat is a step in that direction. And it’s possible that finally settling the Luongo/Schneider issue once and for all could fall into the fabled “addition by subtraction” category. At the very least, the deal creates some salary cap room, which should ease some of the pressure to trade Alex Edler.

But still, if you’re a Canucks fan who was hoping that trading a goaltender could patch a hole elsewhere in the lineup, there’s nothing here to get excited about.

So did Gillis screw this whole thing up?

It’s tempting to say he did, and there’s no question that some observers have delighted in mocking Gillis all along the way. After letting this soap opera drag on for 14 months, Gillis wound up keeping an older, more expensive option who might not even want to be there. And all he has to show for it is a prospect who’s unlikely to help his aging team any time soon.

But while we’ll probably never know all the details of what Gillis could have done in the past, he had clearly shifted into “make the best of a bad situation” mode in recent days. The bottom line is that Luongo’s contract turned out to be untradable, and that left Gillis with only two options: Spend $27 million of his boss’s money to buy out Luongo’s deal, or trade Schneider for whatever he could get.

In the end, he didn’t even get as much as he was asking for Schneider. So yes, Gillis and the Canucks wound up getting stuck with a deeply unsatisfying outcome here. But it was still better than any of his other options.

Could Gillis have got more from a division rival?

Two teams that have featured prominently in recent Canucks rumors are the Edmonton Oilers and Calgary Flames. Both teams are looking for an upgrade in goal, and both held a top-10 pick. But both are also in Vancouver’s division, and it’s possible that Gillis didn’t want to send Schneider somewhere that he could come back and haunt the team.

According to reports Sunday, the Canucks’ asking price to send Schneider to Edmonton was much higher than what they ended up accepting from the Devils. That doesn’t mean the Oilers were going to agree to that offer, and it’s certainly possible that by the time Gillis decided to make the move, New Jersey was the last team standing. But on the draft floor, the Oilers were described as being “in disbelief” when the deal was announced, adding yet another layer of intrigue to an already curious move.

So who is Horvat?

Coming into the draft, Horvat was a well-regarded prospect, a versatile center who was viewed as a top-20 talent.

Of course, that was before the draft. After Sunday, he’ll be known as “the guy from the Cory Schneider trade.”

That’s unfair, of course, but it’s reality. Horvat will be facing pressure in Vancouver well beyond what most similar prospects have to deal with. The fact that most rankings didn’t have him going as high as the no. 9 spot the Canucks picked him in won’t help.

Is Schneider even that good?

Given his pedigree (he’s a former first-round pick) and his role in the ongoing Luongo controversy, it’s easy to forget that Schneider still has fewer than 100 career games under his belt. And, of course, he’s still never had a full season as an undisputed NHL starter.

He’s also older than you probably think (27), and he doesn’t exactly come cheap (cap hit of $4 million). Scouts seem to love him, and his numbers have been excellent. But goalies are notoriously tough to judge without a large body of work to draw from, and Schneider doesn’t have that yet at the NHL level.

At the very least, it’s fair to say that he’s still somewhat of an unknown quantity.

Wait, don’t the Devils already have a starting goalie?

Indeed they do, and you’ve probably heard of him. But while Martin Brodeur holds most of the NHL’s all-time records and may go down as the greatest goaltender in league history, he’s also 41 years old and coming off a season in which he posted the lowest full-season save percentage of his career.

He also has just one year left on his current contract, so it’s not hard to connect the dots here. The Devils have just acquired Brodeur’s eventual replacement, and they’re not looking very far down the road to make that transition.

It’s never easy to be the guy who replaces a legend, so it remains to be seen whether Devils fans will embrace the deal (though their initial reaction sounded positive).

How does Schneider feel about another year as a backup?

Like Luongo, Schneider was kept in the dark on the move. But for a guy who waited all season to finally be anointed as the no. 1 in Vancouver, it’s got to sting to wind up once again backing up an established veteran.

That’s not to say he won’t be the starter in New Jersey. This is clearly going to be Schneider’s job. But he’s probably going to need to wait one more season to claim it.

It can’t be an easy role to accept, but hey … at least he’s had some practice.