Derek Jeter’s Diary: The Yankee Season Is Going Just Fine, Why Do You Ask? 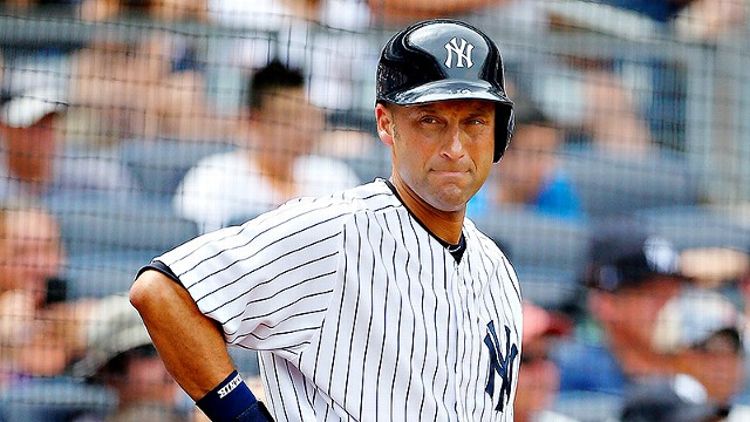 They said I couldn’t do it.

They said I couldn’t be ready for Opening Day after suffering a broken ankle in the playoffs. Not at my age. Not with that many innings on my body.

And they were wrong.

I was ready. You can’t say that I wasn’t ready. I can’t help that I suffered a second freak accident. You can jump to conclusions all you want, but it was just one of those things. You hate to assign causation to major injuries just because they occur in the exact same part of the body, but that’s human nature. They want easy explanations for things. They don’t want to believe that lightning can strike the same ankle twice.

But know this: I was ready. Lightning struck twice. Lightning’s funny that way.

So then they said I couldn’t rejoin the team before the All-Star break.

They were wrong again.

My equipment is in New York.

You never want to take the day off from your diary in the face of disappointing life events, because my journaling coach tells me the lows are as important to personal growth as the highs, even if the lows are rare and the highs are the kinds of things that are so incredible they’re like most people’s fantasies. But sometimes you also need to put the diary aside, let the negativity fade. Process things in your own head without the pressure of writing them down. You need to maybe go back to your apartment, put a hot washcloth over your eyes, and fall asleep on the couch listening to your favorite “Empire State of Mind” Spotify playlist, the one Jay himself put on your computer one night when you were playing Stratego until 5 a.m. A game you won.

But then when you wake up you need to go over what happened, because you can already hear your journaling coach’s voice in your head, getting on you about the missed growth opportunity yesterday. So you go over it:

You came up to bat in the first and got a base hit. A squibber to third, but a hit nonetheless. You went first to third on a single. You scored. The ankle held up.

You grounded out to third in the second at-bat. You got robbed on a great play by the second baseman in the next AB, but you moved the runner up so that your teammates could get him in. You drove in a run your fourth time up. The ankle held.

You did the little things that help your team win. The things a Captain does, the things that no one’s really been doing in your absence.

And the team won. In your presence. The way they always have.

But you came out late in the game with a tight quad.

You had an MRI. It’s a mild strain. You’ll be ready to go again right after the All-Star Break.

They’ll say you can’t do it, that you won’t be ready that fast.

hey jetes cant call
i talked to the people yesterday. cant say what people. but you know.
the people are after me jetes. had to hide out and miss my rehab game.
ill be fine dont call
next time i call use codeword ‘mr clean’ so i know its you.
im ‘ricky blue eyes’
dont ask its for secret reasons.
if u see codeword ‘shitface selig’ i am in montana. tell him i live there.
destroy after reading.
talk soon.
u can call if you want jetes.

This was the ugliest game of the season. It makes you a little sick to even think about it.

There was a time, approximately up to two days ago, where we always beat the Minnesota Twins. Always. I’m not going to check right now, but I believe that we were 48-0 against them from 2011 until yesterday.

That’s the worst part of this. You can’t even pencil in two out of three Ws against the Twins anymore.

But you have to stay positive. This is a streaky team. When I’m back on Friday, we could very easily go on a 10-game winning streak and end July four games up in the division. You never know.

It would have been nice to go into the break on an up note, but you can’t always have it your way. All you can do is use the time off to recuperate and get ready for a run right to the World Series.

Bud Selig called me today. When he heard that I wouldn’t be attending the All-Star Game, he offered me a roster spot. I very politely explained to him that I’m resting my quad for a second-half championship run and unavailable to play. Just show up, we’ll see what happens, maybe you get on to the field, maybe you don’t, he said. It’d be good for the game. I’m already in New York. And so on.

But I respectfully declined. He seemed to take it well, even when I turned down the opportunity to have a chopper pick me up on the helipad of my building and fly me right to the visitors’ dugout on game night, where David Wright would hand me a key to the city.

You hate to say no to the commissioner of baseball, and it’s always a great honor to be asked to be on the team, but when you can’t play in games that count, you can’t play in All-Star Games. Period. Helicopter rides and surrendering Mets aren’t going to change your mind.

I thought he might bring up A-Rod, but he didn’t.

Then late tonight the concierge delivers a large wooden box.

Inside is a bottle of Mr. Clean, two bright-blue marbles, and a prepaid cell phone.

But I have the concierge fired.

What an incredible night for Mo.

Sure, Jim Leyland maybe ruined it a little by calling for the greatest closer of all time an inning early in a non-save situation, but we already know that he’s always had some problems managing his bullpen. You can’t expect him to suddenly figure it out in the All-Star Game just because a living legend should be getting a perfect send-off.

Still, it was a pretty special moment when Mo walked out to the mound.

In the eighth inning.

But they gave him a Corvette.

Which is almost as good as the save.