Derek Jeter’s Diary: The Heat of the Moment 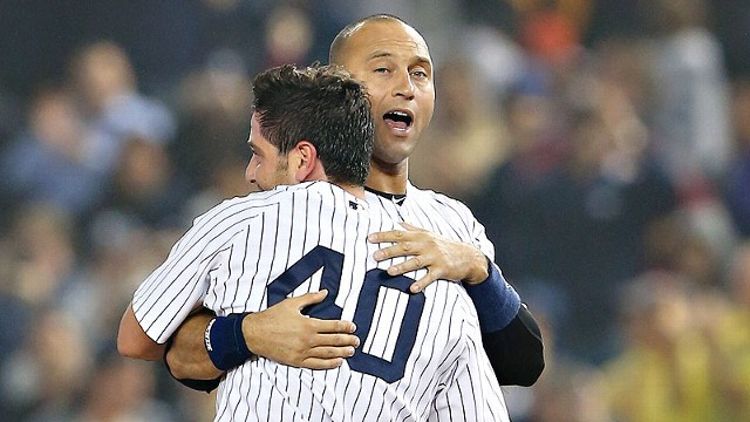 It’s been a crazy month. Baltimore has been relentless. You keep waiting for them to go away, but then you ask somebody on the team who’s watching the standings if they’ve fallen back to a safe distance yet, and they kind of just shake their head and get a glazed look in their eye, like you just asked them to go check the basement and they’re totally convinced there are ghosts down there. The whole thing starts to feel more like an exorcism than a pennant race, especially when you consider that there’s compelling evidence that Buck Showalter is dabbling in dark forces he can’t control. And then there are the stories the guys tell you about how they heard Camden Yards has been receiving regular shipments of live goats since late August, or that Peter Angelos has been aging in reverse all season, or that in some translations of the Bible it was actually an oriole, and not a snake, that led to the fall from Eden. At some point, as Captain, you just have to tell everybody to stop worrying about that stuff and just go out there and play to win, even when you know there’s probably a lot of truth to the paranoid whispers. That’s not lying. It’s leadership. There’s no point in pulling back the curtain to reveal the man in the orange-and-black robes mixing pine tar with fresh chicken blood. That just spooks people.

At the end of the day, they’re just another baseball team. Even if they’re getting a little extra help to keep things interesting.

There are certain players who come up big in big situations, who rise to the occasion, who aren’t intimidated by the spotlight. The guys you want to go to war with. Your Andy Pettittes, your Mariano Riveras, your Jorge Posadas. Sabathia. Robbie Cano the last couple of years. Then there are the guys where you’re like, these are very good players, OK, maybe they’ll get the job done — you’ll take your chances with them most of the time. You’re not going to write those names down here, but they hit in the middle of the order somewhere and make a lot of money, and you know who they are. Then you’ve got Alex Rodriguez, who has driven three different sports psychologists clinically insane. One tried to bite off Alex’s nose at the end of a session, or so the story about how A-Rod got those 15 stitches at the end of last season goes. Then there are your role players, your bench guys, your assorted whatever.

Then you have Ivan Nova.

It’s not that you don’t trust him, exactly, it’s that when you’re playing the most important game of the year, you’d be more comfortable with Pettitte pitching it on two days’ rest because there’d be a smaller chance that when you walk up to visit him on the mound, he’d ask you, “How many gallons are in the ocean, Cap? Like more than 50, right?” And then the next thing you know, he’s headed for the showers in the fifth with an empty plastic milk container because he really wants to get a handle on what 50 gallons looks like. There’s maybe a little bit of a focus issue sometimes. And you’re not gonna fix that in late September, quite frankly.

There’s still plenty of time to lock this down. It ain’t over till it’s over.

(Note to Baltimore: That doesn’t apply to you. Our guy said that. Find some boring thing Cal Ripken said to rally around.)

We win big up in Toronto, the Orioles win big down in Baltimore against the Red Sox.

You hate to accuse the Sox of laying down for the O’s just to exert some pressure on the race, but Bobby Valentine pitched four innings himself. Underhand. (I checked with Kuroda and Ichiro, and that’s definitely NOT a valid pitching style in Japan, no matter what Bobby V. said in the postgame about “working on his shuuto.”) He also let Buck Showalter fill out his lineup card, which is almost definitely against the rules, especially when the opposing manager writes “Ted Williams’s head” in the cleanup spot. Even with the mess of a season they’re having, there’s no way they’ve been carrying it on the expanded roster all month.

Not a good night. Usually I don’t have any problem dealing with that kind of disappointing outcome, but tonight was a real struggle. So I spent a long time on the phone with my journaling coach figuring out a strategy for tonight’s diary. He finally proposed a Q&A that I could transcribe for the entry. Here’s how it went:

How does winning make you feel?
It’s been so long I don’t remember. Ask me tomorrow.

How does [unintelligible word] make you feel?
Could you repeat that?

How does [same unintelligible word, no idea] make you feel?
I’m sorry, I don’t understand what you’re saying.

[much LOUDER, but still no luck]
You don’t need to yell at me in German. I don’t speak German.

[a sigh] What is the opposite of winning?
You’re fired.

And that’s when I let my journaling coach go. You hate for a relationship to end that way, but things can get heated when you’re tied for first with four games left, a guy you’re paying good money to provide a positive service insists on shouting ugly foreign nonsense words at you, and you’ve just come from a stadium where 36,000 people were all politely chanting “Best of luck, Big Apple friends!” as you filed out of the dugout. Everybody’s got their breaking point, even a Captain. You just hope he appreciates the gift basket — there’s like $5,000 worth of signed merchandise in there. Maybe that takes the sting out of it a little.

One more day in Toronto. We can’t get out of here fast enough. There’s still a division to win.

When you’re this deep into September without a clinched division title, which is something that will happen every fifth season or so just by chance, each game automatically becomes the biggest one of the season. So it was really gratifying to get the most important W of the year in a huge, late-inning comeback, especially when Baltimore had just finished sweeping the Sox. (Tonight’s lineup card stunt: Leading off and playing shortstop, “Big Papi on Roller Blades.” Bobby V.’s really going down swinging. Does he even know Ortiz has been on the DL for a month?) This is why you never give up in baseball: Even if you’re down big, and the bitter historical rival obsessed with ruining your life is rolling over for the team that’s been using witchcraft to deny you your championship destiny, you’re never out of it until that last out.

Late tonight, we clinched a postseason spot when the Angels lost the second game of a doubleheader to the Rangers. The texts started to roll in:

Swish: PLAYOFFS!
Joba: FCK YEAH!!!!!!!!
Hughes: Never shaving my creepy mustache!
Boone Logan: [emoticon that looks like a penis killing a smiley face]
A-Rod: u wanna come over and watch once upon a time on abc? all the guys are coming i promise
Nova: im not gonna make roster am i jetes

And my answers to the entire team:

October. OK, now I can start looking at the standings myself. And my eyes confirm that after we beat Boston tonight and Baltimore ended its crazy-making four-game winning streak, we’re up one in the division with two to play. You don’t want to read too much into a single night’s results, but you still can’t help but hope that Buck Showalter has finally run out of shirt buttons to feed his pocket-gypsy. We can’t worry about that, though. All you can do is go out there and do your best to overcome the forces of evil aligning against you with time running out, whether it’s the possessed birds finishing up down in Tampa or the team in your visitors’ dugout, which has nothing to play for but the sheer joy of destroying your season.

After the game, Alex comes up to my locker holding a bowling trophy.

“Everyone’s fighting over whether or Mike Trout or Miggy Cabrera should be MVP. But I think you’re the MVP, Jetes.”

He hands me the trophy. The plaque on it reads “World’s Best Bowler,” and there’s half a ripped-off sticker that has the word “Rodriguez #13” written on it in green marker.

“That’s really nice of you, Alex. But I can’t accept it. All I care about is winning this division right now. We need to focus on that.” I hand it back to him. He looks at it for a second.

“But would you vote for me?”

“Let me think about it. Trout’s got a pretty strong case.”

“I’m gonna e-mail you my MVP PowerPoint right now. Boras usually does them, but I like mine better.”

“I’m not promising anything, Alex.”

He walks away. I overhear him inviting Robbie Cano to his MVP party.

It took me the entire second half, but I finally remembered how to pronounce “Raul” tonight. It gets a little easier when the entire stadium is screaming it at the top of their lungs.

One game to go.

And then the real season begins.