Derek Jeter’s Diary: The End of the Road 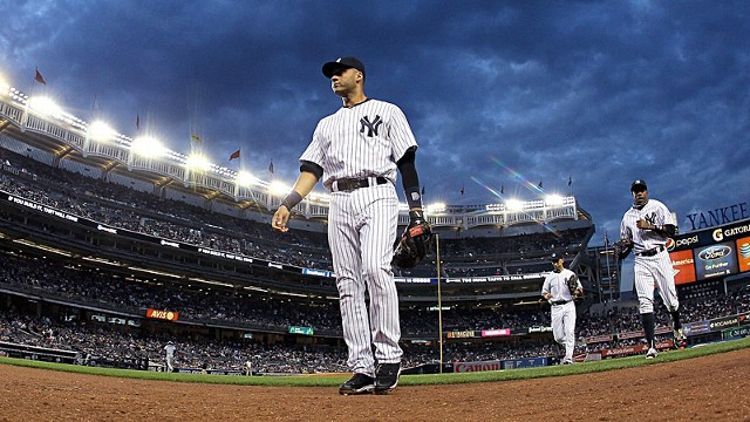 I don’t even know the final score. But I do know this: There is winning, and there is misery. A wise man said that.

But that doesn’t quite capture the whole truth, does it? You hate to be presumptuous enough to think you can improve on something as great as that, but under the circumstances, you have no choice but to try. The only way out is through. (A different wise man said that one, I’m assuming. Two all-time sayings seem like a lot for a person to accomplish in a single lifetime, unless that person is Yogi Berra, and neither of these sounds very Yogi.)

There is winning, and there is the total death of happiness.

There is winning, and there is eternal darkness.

There is winning, and there is a feeling like having all of your childhood pets brought back to life just so you could watch them get hit by a garbage truck as you stand by waving your arms helplessly, trying to tell them to get out of the street before it’s too late, but they can’t hear you because your tongue has turned into rattlesnakes. This may or may not be a recurring nightmare you’ve had since you were 6.

There is winning, and there is a lifetime contract on a small-market, low-revenue team with no commitment to year-in, year-out excellence, even though they’re rolling in luxury tax and revenue-sharing money from teams obsessed with winning.

There is winning, and there is the helpless feeling of being thousands of miles away from your team, a rudderless, flailing team that needs its Captain more than ever, as you await surgery for a freak injury that crushed the championship dreams of millions of fans. The feeling you only allow yourself to experience for a moment before you start to focus on next year, when things will be back to normal.

There is winning, and there is a World Series lineup card that doesn’t have your name on it.

Yeah, maybe those aren’t as pithy as the original. Some people will say I’ve never been the most quotable player. I guess I have four to five months to work on that.

Today is not a good day.

Friday, October 19: Day 1 of the Offseason

There’s this tradition I have for seasons that don’t end in a World Series trophy. I take my uniform, fold it neatly on the floor in front of me, and then light it on fire. Then I watch it burn. I don’t look away until there’s nothing left of that failed year, and of the tainted pinstripes that represent it, but a smoldering pile of ash. When the ash cools, I collect it in a cup. Add some of the champagne we never got to uncork.

But you have to keep everything down. It’s the only way the ritual works.

The only way out is through.

The people here in Charlotte don’t seem to get it. Apparently, building a fire in your room is against the law. But it was all over before they arrived with the extinguisher. They can’t stop the healing.

Surgery tomorrow. Then the recovery begins.

Saturday, October 20: Day 2 of the Offseason

Sunday, October 21: Day 3 of the Offseason

You hate to be the kind of person who tells people about his dreams, but there’s definitely an exception to the “keep your dreams to yourself” rule involving writing about your dreams in your journal. If someone reads it, they read it. No one forced you to bore yourself while invading someone else’s privacy.

I see a figure in the shadows. A hooded silhouette at the foot of the bed.

My eyes adjust, and then I realize:

And then the gypsy leans forward, its face still in shadow.

It leans in a little closer. Into a sliver of moonlight from the window.

It pulls back the hood.

So this is how it’s going to end.

“He never should have benched me, Jetes.”

I see the face:

He tosses a small satchel into my lap. It’s full of buttons. Buttons from my uniform. I don’t know how I know they’re mine, but I know.

And then I wake up.

But there’s a satchel full of buttons on the nightstand.

I suppose I always knew.

All you can do is go out there, take it one game at a time, and when you finally look up to check the standings in October, hope you’re 162-0.

And headed to the World Series.

Just the way it should be.