Derek Jeter’s Diary: Pottery Is No Substitute for Baseball 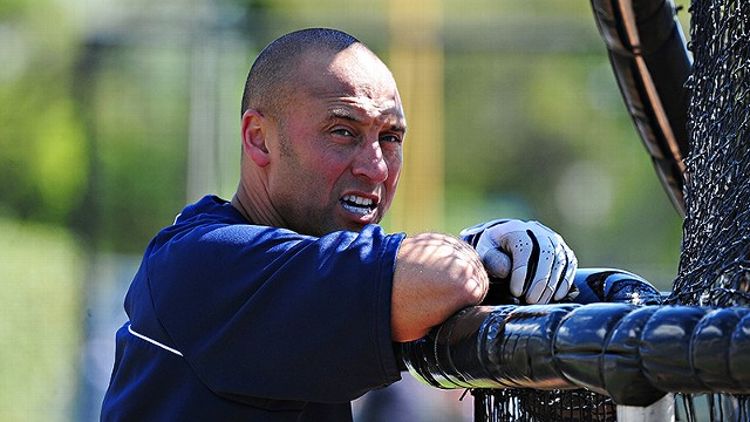 The Captain in Tampa.

The last season desperately hanging on to you, the new season starting without you.

This can’t be Opening Day. It can’t be. After The Incident, the Captain promised he’d be on the field Opening Day. A Captain’s word is more than a promise. It’s a fact. It’s like what the pope has, where he can’t be wrong. But with baseball. There are other similarities: We both wear instantly recognizable hats and beautiful garments, and we both have been chosen as leaders of men by an inner circle who’ve taken oaths to protect a proud tradition at all costs. We’d understand each other, me and the Pope. I’m pretty certain of that.

And yet here I am, in Tampa, away from the team. Because of the ankle. I’m not going to talk about the ankle. It is what it is. And what it is is just a totally normal part of the recovery process. You show up at spring training, ready to go, taking everything as it comes, one drill at a time, and then the next thing you know they’re shutting you down and the team’s on its way north. Without its Captain.

I’m also not going to talk about the offseason. We all know what happened. A-Rod went down. Grandy went down. Tex went down. Cashman went down. Some guys left, some guys — not the usual high-end guys, just some role players to hold down the fort for a little bit — came in to take their place. All you can do is text a nice good-bye to your former teammates and offer a welcoming fist-bump to the new ones. It’s the way this business works.

I didn’t keep the diary in the offseason. I wanted to, but my journaling coach told me it was time to put it down for a while, that the hundred or so pages where I’d made rough sketches of super-advanced ankle-reconstruction technologies weren’t really helping either my physical or my mental recovery; they were just frustrating me as I continuously ran up against the pretty pathetic limits of current medical science. And so I put the diary aside and sought some other outlets for my free time from rehab. It turns out I’m secretly a natural with pottery. That’s not something you’d discover about yourself under normal circumstances, that clay bends to your will as easily as horsehide. You should see all the pinstriped flower pots and glove-shaped ashtrays around my house. It’s amazing.

I also took up Words With Friends.

I feel like I’m rambling. I’m a little rusty at this. But it’ll come back to me.

So it’s Opening Day and it’s not.

CC on the mound. Pettitte in the dugout. Mo never getting a chance to get out of the bullpen.

I’m here and not there, home but still away.

But I’ll be back soon. That’s a fact.

Robbie dumped Scott Boras and signed with Jay-Z. I can’t say I didn’t know, because Jay is a very close personal friend, and I was playing Halo with him when they made the announcement. This is a great move for Robbie. By hiring Jay as his agent, he’s showing he’s dedicated to everything about New York. And by firing Boras, he’s showing he doesn’t want his contract extension negotiation to turn into a hostage crisis. Still, it couldn’t have been easy for Cano to pull the trigger. Boras will promise you anything. Every time he tried to poach me, and he tried basically every week for 15 years, he offered crazier and crazier things. “I’ll get you double A-Rod money.” “I’ll get you a private space shuttle, in case they move the Rays to the moon.” “I will kill any three people for you, if you just tell me their names.”

But I turned him down every time. The only thing he can’t negotiate for you is respect. I don’t care how many people he offers to kill.

Great decision by Robbie. I hope to be turning double plays with him for another three to nine years.

I don’t know about Kevin Youkilis. You hate to be suspicious of a new teammate, but when a guy comes over to the other side from the greatest rivalry in the history of sports, it’s best to keep an eye on him for a while. Nobody gets a free pass: not Wade Boggs, not Rocket, not Johnny Damon. Suspicions aren’t lifted until their first ring ceremony. That’s just the way it has to be. You don’t know what kind of ideas the Red Sox put into their heads. You hear the stories about how they’re taken to a room behind the Green Monster, tied to a chair, and get the Bloody Sock stuffed into their mouths and car batteries hooked up to their rosin bags while they watch footage of every Yankees victory parade down the Canyon of Heroes. And there were a lot of parades. What’s real and what’s just myth? You can’t take the chance; you have to assume it’s all true and act accordingly.

Just because you’re wearing the uniform doesn’t mean you’re a Yankee. It only means that we made you shave your goatee, and now you kind of look like a drunk baby in pinstripe pajamas who’s trying to start a bar fight.

All I’m saying is we’ve played two games against the Sox, and neither went our way.

I’m watching, even from a distance. I have eyes everywhere.

And Joba ready to throw at him in the shower.

You can’t really express how great it is to see that again. It’s extra motivation for my own rehab. Well, maybe not technically “extra,” because I’m already at maximum motivation to get back on the field. I’m focused on nothing else; everything I do from the minute I wake up until the moment I finally pass out in front of game video in the DJ2 Highlight Theater — which is now outfitted with a cutting-edge 3-D projector so I can examine plays from every angle — is dedicated to rejoining the team as fast as humanly impossible.

I was so happy about the guys putting one in the win column that I even picked up the phone when A-Rod called.

“I’m a little surprised you answered. You haven’t taken my calls in months.”

“I’ve been busy. Great game, though.”

“Did you get all the gift baskets I sent you? I sent one every day, but I haven’t gotten any thank-you notes, so I was a little worried they didn’t get to you.”

“What are you sorry about, Alex?”

“Anyway, my rehab’s going great. Totally killing it. You see my Facebook photos?”

“They were in one of the baskets, Jetes.”

“I must have missed that basket.”

“That’s so great, Jetes. Tell me how they look in your thank-you note.”

I don’t say anything.

“It’s gonna be a great half-year. I just know it.”

And then he’s gone.

Thirty seconds later, he texts me the Facebook photos and a link to an online thank-you card service.

I’m not going to say which team the 8’s belong to. But suffice it to say that’s not how you want your team to return to the city where your season ended. Painfully.

The naysayers will point to our slow start — without four of our everyday All-Stars — as evidence that this club can’t get back to the postseason. I’ve said this before, and I’ll say it again: I don’t look at the standings, or the records, until late September. They’re meaningless until then. Especially when everybody knows that April games count less than ones after the All-Star Break. Maybe not mathematically, but emotionally and spiritually. Don’t listen to the sabermetrics people on this. They’ve never been in a pennant race and turned a single win into four or five Emotional Wins. They’re always ignoring that Emotional Win column because you can’t see it. You have to feel it.

CC over Verlander, in a duel between the two best pitchers in the league. A shutout. On the road.

I know what I said about early-season games, but let me pick up that thread from last night: We may have only taken one out of three in the series, but this was definitely an Emotional Split. Everybody on the team understands that.

After the game, I FaceTimed into the clubhouse on Boone Logan’s iPad to tell the guys what a great job they did. And I showed them the cookie jar I made in the shape of CC’s head, with a sideways, flat-brimmed hat for a lid. He loves it, asks, “Can I put Cap’n Crunch in it? I’m more of a cereal guy.” Of course he can. Whatever helps him put on some weight — the radar gun says his velo’s down. That’s nothing that 30 or so pounds won’t fix.

And then Boonie asks if I made a cookie jar of my feet. Why? “Uh, no reason.”

I’m going to need some extra time at the potter’s wheel to forget about that one.

Say what you will about the current state of our lineup, but you don’t score 11 runs by accident. Travis Hafner’s hitting .391. Vernon Wells is hitting .381. Youkilis is at .370, though I’m not sure what his angle is. No one expected that kind of production out of these guys, but there’s something magical that happens to old, declining, and/or injury-prone players when they put on the Yankee uniform. Just ask Raul Ibanez or Eric Chavez, if you can find them. I have no idea if they’re playing this year. I think I heard Raul is a substitute social studies teacher in Montana, and Chavvy’s laying low in Thailand. You tend to lose track of people when they effectively don’t exist for you anymore.

Oh, Swish signed with the Indians? I thought I saw him in a replay, looking up at one of Robbie’s homers. Good on him. He obviously doesn’t care enough about winning to sign a below-market, one-year deal with us, but it’s nice he found a place to land. He must love the surfing there.

I sent Girardi a video of me running and flawlessly executing my baseball drills, so he could get a good look at the progress I’m making and start thinking about where he’s going to write my name into a lineup card again. It’s a fun video, too. We hired that Spring Breakers kid to shoot it; he seems to “get” Florida. And the Skrillex in there is great background music; it really makes the slow-motion montages of me hitting in the cage and taking bocce-ball grounders in the therapeutic fielding pool.

And I’ll be back before you know it.