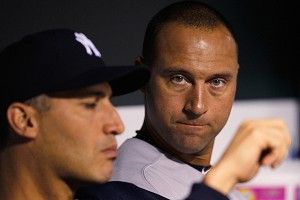 Wednesday, May 9: vs. Tampa Bay

I don’t want to talk about the game. Suffice it to say, it didn’t go our way. Robertson loaded the bases in the ninth with nobody out, gave up four runs, and blew his first save as our new closer. Yeah, we can all talk about how much we’re going to miss Mo, but D-Rob hadn’t given up a run since last September. (I know this because every reporter at my locker mentioned it. Guess that was a “thing” in the press box tonight.) Is pitching the ninth really that much harder than the eighth? I’m not a reliever, I actually play baseball for a living full time, so maybe I’m not the best person to speak to that difference in the alleged “closer mentality.” Anyway, Davey Robby be fine. He’s the guy. Or maybe Sori. Let’s not get too wedded to one “the guy.” We’re deep in the pen, it’s more about finishing games we’re winning than labels.

The reporters can’t stop asking about Josh Beckett playing golf even though he missed a start because he was hurt. I obviously can’t comment on that publicly because (1) I don’t really know the details, and (2) he’s on the Red Sox, and whenever you start talking about your biggest rivals, it turns into bulletin board material. They’d thumbtack it up there right under the new “no fried chicken and beer” sign, and right above the picture of Colonel Sanders with “Eat Me, Bobby V” in a cartoon bubble coming out of his mouth. You never want to give the other guys more motivation like that. You just hope their organization is putting out enough healthy alternatives in the clubhouse buffet so it’s not an issue anymore.

That being said, and since this is my private journal and therefore officially ineligible for being posted to any enemy billboards, this is the deep, dark secret of baseball: Pitchers are incredibly lazy. They’ll tell you there are side sessions, and throwing days, and that they lift weights like everyone else and all that. But here’s the truth: They’re doing nothing. They’re playing golf, they’re out at the go-kart track, they’re getting drunk and painting flowers that look like penises on pottery at Color Me Mine. They all do it. Halladay, Greinke, Lester, Darvish, whoever. Baseball’s a super boring game when you only play it every fifth day, and on the other four days there’s a lot of standing around and trying to beat your personal best in spitting sunflower seeds for distance.

Still, baseball is a brotherhood and we all do what we can to protect the pitchers and perpetuate the myth that they’re athletes, but the truth is the truth. They’re part-time players. Most of them are grossly overweight. OK, maybe not most, but a lot more than you’d suspect, maybe in the 50 to 75 percent range. Baggy uniforms hide a lot. Josh Beckett is maybe 15 pounds less than CC, I promise you that. Weigh him. Put him in one of those water-displacement tubs to more accurately measure his mass, it doesn’t matter, you’ll see I’m right. Golf is kind of the perfect fat-guy game. Swing a club, get in your oversize Rascal, and drive after your shot. You can’t really blame an obese bored guy for keeping busy, even if he’s hurt. It’s still more fun than physical rehab or sitting in a dugout that’s cut off the KFC deliveries. It’s a non-issue and that’s why I refuse to comment on it.

It’s always great when you can take two of three from a division rival, especially one that’s very momentarily ahead of you in the standings. It’s even nicer when you get a start like this from your ace in a matchup with their ace. You don’t want to get into this “my ace is better than your ace” game, no one’s saying that, but the results speak for themselves in that one guy got a W and the other guy is David Price. Has anyone noticed how he kind of looks like Drake? You want to say Drake could play the lead in The David Price Story, but they tend not to make movies about the guy who didn’t win. It’s just the way Hollywood works, they’re really kind of bandwagon fans.

Someone told me I took my 10,000th at-bat tonight. Everybody knows I care only about one statistic, the W, but you’re always humbled when you realize you’ve been fortunate enough to stick around to hit a milestone like that. All you can do is go out there every day and try to have as many at-bats as possible. Four, five, six ABs, you take as many as they give you, one game and four-to-six at-bats at a time. Maybe three at-bats, officially, if the guy is wild and you throw a couple of walks in. I’m even OK with a two-AB game if that’s what it takes for the team to win. You don’t want to get too caught up in the numbers.

Two straight games against aces, two big wins against aces. King Felix this time. I know what you’re going to say: Seattle is basically a Triple-A team, or maybe a not particularly competitive Japanese league team, but that’s really unfair. You can’t compare them to say, the Seibu Lions, they use a different ball and titanium bats that are square instead of round. It’s a totally different game in Japan. You have to think a major league club like the Mariners would be a pretty heavy favorite for their wild card, if they even have that. Maybe all their teams get into the playoffs, that seems like the kind of thing they might do. In that case the Mariners’ playoff odds go up significantly. You gotta like their chances there, that’s all I’m saying.

It was pretty nice seeing an old pal like Jesus Montero back at the stadium, too. We chatted a little at batting practice, and he was joking like, “Take me back!” and I was all joshing, “Yeah, come on back, that trade was a total disaster, Michael Pineda might never even pitch for us!” And he goes, “Can we file a grievance with the league?” but not in a real serious way, and I told him, “I’m going to check on that, I’m sure there’s some kind of ‘damaged goods’ clause we can invoke, right?!” We had a nice laugh about it all. He homered off us that night, too, and when he jogged by me at short, he goes, “I checked with the union, there’s nothing I can do but wait for free agency.” He’s a funny kid, I miss him.

While we’re on the subject of kids, after the game we saw that Bryce Harper slammed a bat into a wall and it bounced back into his face. He’s only 19, he’ll eventually learn that if you’re going to throw a temper tantrum, that’s what the water cooler is for. Personally, I’ve never had a tantrum after a bad at-bat, but then again, I’ve been lucky enough to have a basically unprecedented run of success since my first full year in the league. That really takes the sting out of an oh-fer. He’ll learn. Maybe not that exact lesson: Five rings is kind of a crazy thing to shoot for, even after he signs with us.

Three-game win streak. Can’t complain about that. Philly Hughes won his second straight start. Still don’t trust him, but it’s nice to see a guy get out of a rut, and you get a little tired of giving all those insincere “tough break, go get ’em next time” fist bumps. And Ibanez homered for the second day in a row. Still mixing him up with Chili Davis for some reason, which is weird because Chili was a switch hitter who hasn’t played for us since ’99 and Raul is probably 40 years older than him.

A Captain doesn’t always have time to remember who everyone is — in fact, the key to good leadership is making everyone think you have a baseline understanding of their identity. I tried flash cards once, but honestly, it was more hassle than it was worth. Another Captain pro-tip: If you get caught calling a guy by the wrong name, just tell them it’s a new nickname. They hardly ever argue about how you got “Billy” from “Rafael,” they’re just happy you’re putting in the face time.

Andy Pettitte’s finally back! Everyone definitely wished him well when he retired, but I think we all secretly knew he’d be back within two years, max. It happens to every guy who tries to walk away too early: They sit around at home all day, hoping to watch some games, but are forced to try and relate to their loved one without a built-in, nine-month break to keep their sanity. It’s not that they don’t love their families, it’s just that families are no substitute for professional camaraderie. If you had $200 million worth of payroll in your living room, maybe there’d be some competition, but that’s a pretty rare domestic situation that’s usually limited to, like, sheiks and shady Russian oligarch guys who allegedly murdered their way to copper monopolies or something. Anyway, it’s so great to have one of the Core Four back in the dugout, even if this first start could’ve gone better in the winning sense. He’ll get ’em next time. (Don’t have the heart to tell him Jorge retired, but he’ll figure it out soon enough. He’s always been relatively sharp for a pitcher.)

Monday, May 14: at Baltimore

We beat Baltimore. Nothing interesting about that. Go ahead and try to name five players on their roster. You can’t. You can do Adam Jones, J.J. Hardy, Matt Wieters, and maybe Nick Markakis, and then you just kind of start randomly yelping out names of players who were in other teams’ minor league systems in early 2006, half of whom you remember only because they died in freak accidents. You had no idea Nick Johnson was actually on the Orioles, even after I mentioned him two weeks ago, because you assumed I just pretended he was on the roster to make that great Unbreakable joke. And don’t you dare point to the standings, or I’ll personally pay for Bartolo to fly by private jet to your location and bite off your pointing finger. It’s May.

So let’s consider it an off-day, put on Baseball Tonight, and watch Bryce Harper hit his first major league homer. The first of many, if he doesn’t kill himself beating the clubhouse trampoline with a bat after a caught-looking, LOL. And no, I have no idea why the Nationals keep a trampoline around, maybe they hope Brad Lidge will Joba himself out for the year when he comes back and make some of their bullpen choices easier. Time for Monday Jetes to get some rest before Tuesday Jetes leads the team to another inevitable victory against the American League East’s orange-headed stepchild! Good night!

Tuesday, May 15: at Baltimore

What did I tell you about journal-jinxing the next day’s game?! How could you be so damned careless? I know it’s tempting to get cocky after that second bottle of room-service merlot, especially considering the opponent, but we can’t afford slip-ups like that. Not in April, not in mid-May, not at any time that games count in the standings. Sometimes you really disgust me. Focus.

P.S. I’ve already called the front desk and had them deactivate the pay-per-porn. Wednesday Jetes is going to show up ready to play. Believe it.