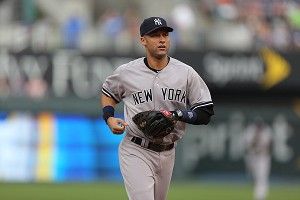 Wednesday, May 2: vs. Baltimore

If it seems like I’m always writing how I’m worried about how badly X player (Phil Hughes) or Y player (probably also Phil Hughes, but sometimes Freddy Garcia) is performing, it’s because this is a private space to record my secret thoughts, and it’s healthy for me to have a safe place to share. You can’t really approach a guy in the clubhouse and say, “Wow, you really freaking stink right now. Please stop stinking. You’re making me uneasy with your failure.” That’s just not positive, and positivity is probably the most important element of being an effective Captain, even if it’s insincere. So to get out the negativity, you write the truth in your diary, or you roll up the windows on the Rolls on the drive home and scream until your eyes throb, or maybe you take a black crayon and do like crude little sketches of the people who are interfering with your peace, then you take the red crayon and you scratch them out real violently. It’s not voodoo, it’s therapy, please don’t dismiss a healthy process endorsed by a licensed therapist as black magic, that’s close-minded. I guess this is where I should mention Ivan Nova’s 15-game winning streak ended. Against Baltimore. You hate to dismiss Baltimore just because it is Baltimore, but at the end of the day, it is Baltimore.

Tex’s start has been brutal. I mean, it always is, but he seems to be dealing with it differently this year. He’s started sneaking into the clubhouse to shave while we’re hitting, always mumbling how he “feels scratchy” and it’s distracting him at the plate. Sometimes, after he hits another infield pop-up with guys on base, he’ll get back to the dugout and run right up the tunnel to his locker, then reappear a couple of minutes later freshly shaved. Then he insists you look at his face to make sure there aren’t any stray hairs, and there never are, he’s very, very thorough, but he asks you to hand-inspect his cheeks anyway. It’s like a thing now. If it’s an especially bad day at the plate, like today, there are hot towels all over the dugout. We really need him to get back on track, that’s pretty gross.

Did you see that Jered Weaver no-hitter? That’s a fantastic accomplishment for him, even if it carries an asterisk because he did it against the Twins. I don’t agree with the asterisk thing, they’re a major league team, but that’s just the way they officially record it. I always get Jered mixed up with his brother Jeff, who is now probably a surfboard mechanic in Escondido. Who knows? We don’t keep in touch because he lost us the World Series against the Marlins in ’03. Good on Jered, though, even if his brother caused about 10 million people in New York a lot of misery. I’ve used up a bunch of crayons on that guy.

Thursday, May 3: at Kansas City

Mo just went down on the warning track shagging fly balls in BP. We don’t have a lot of information at this point, they’re always very tight-lipped about this kind of thing, even when the Captain asks them, but from the best I can tell he’s probably dead. I’m devastated. We’re all devastated, the entire WORLD is devastated. This is a Yankee Legend, the greatest closer of all time, a first ballot Hall of Famer, dying on the field in Kansas City. KANSAS CITY. The only appropriate response is to burn down the entire stadium immediately, I have Swish gathering rags and gasoline. Their warning track is a death trap. After Bip Roberts died there in 1997, falling down face-first into the very dangerous pile of broken glass that rings the outfield and then bleeding out while someone hopped a train to St. Louis for help, how do you not clean it up? I know it’s a small-market team with limited funds for making sure their outfield isn’t a death trap, but this is unconscionable. You don’t want to call people evil, even when it seems like a pretty clear-cut case of evil. It’s evil. Keep Mariano in your prayers. You think a guy’s invincible. No one is. Not me, not Jorgie, not Mo. Will write more when we hear some news, but we all fear the worst. This city shall burn, mark my words.

Friday, May 4: at Kansas City

Look, things were pretty emotional Thursday, and I may have said some things in the heat of the moment I only partially meant. Mo is NOT DEAD, I repeat, he is NOT DEAD. He tore his ACL and meniscus, possibly some other stuff in the knee region. Obviously, that’s not good, but it’s much, much better than death. They say he’s out for the year, which is obviously a devastating blow to the team. But I never believe a “they.” I’m not a doctor, but I wouldn’t count out the possibility that we’ll see Mo on the mound in September. Yeah, that would probably be a miracle recovery from this kind of an injury, but we’re not talking about medical probabilities, we’re talking about what I desperately want to happen. If I’ve learned anything throughout my career, it’s that if I want something badly enough, it usually just happens. Five world championships, a bunch of Gold Gloves a lot of people aren’t thrilled about, a dating history that Hugh Hefner has personally congratulated me on via Twitter on more than one occasion, are you going to bet against me? I didn’t think so. Mo will be back. Write it down in big letters, that’s what he said, and that’s what I’m saying, though I’m saying it with a more aggressive timetable.

Let’s look at the bullpen and see how we’re equipped to handle Rivera’s absence:

David Robertson: One of the best relievers in the game. I feel really good about him. He’ll be great in Mo’s surprisingly brief absence.
Rafael Soriano: Fuck this guy. Who gets $12 million a year to pitch the seventh inning? It’s not my money, but that’s still pretty offensive as an idea. You could pay for like a hundred Make-a-Wish kids to come to every game for a year with that cash, fly them first class, sit them on ponies behind the plate. Scott Boras is basically a war criminal.
Boone Logan: As I’m writing this, he’s defecating into a cowboy hat in the middle of the clubhouse and yelling, “Giddy up, it’s Quattro of May!” No idea. You’re not going to trust a guy like that with much more than walking the occasional lefty.
Freddy Garcia: Yeah, no.
Clay Rapada: I have no idea who this is.
David Phelps: Seems like a nice kid, but we’re all kind of hoping he takes Philly Hughesy’s job at some point.
The other guys we have: Let’s not be ridiculous.
Craig Kimbrel: We’re trading a low-ceiling middle infielder in Double-A for him any minute now. Welcome!

Oh, we took the W, 6-2. Of course we did, we had to, that was a three-game not-win streak. And I hit a homer for Mo. See you on the mound in four to six weeks, old buddy.

Saturday, May 5: at Kansas City

You hate to make excuses when you don’t put one in the win column, but you have to write today’s game off to the Mo situation. We were on a real roller coaster ride this week, thinking he’s maybe dead, finding out he’s not actually dead, and then realizing you’re going to be without him for a while. I mean, come on, when you can’t hit Felipe Paulino — who I think has a career ERA around 15.47, including a couple seasons pitching in Singapore and North Korea — it’d be nuts not to consider the external factors. It’s not an excuse, it’s just reality.

We’ll get them tomorrow. And then we’ll leave Swish and Nuney behind to burn the place down. Don’t think I forgot about that. That’s the thing about justice, you never forget it.

Sunday, May 6: at Kansas City

I told you we’d get them tomorrow: 10-4, with a Robbie Cano grand slam. I wasn’t being cocky about that, just confident, confidence is everything in this game. Even Hughesy pitched well. No, I’m not going to start trusting him out there because he had one good start, but three earnies with seven strikeouts sure beats getting yanked after 90 pitches by the fourth inning and watching Cory Wade take his mop out there to clean up. Don’t get me wrong, Cory’s a quality mop-up guy, but you’d just prefer to never see him pitch, ever. It’s like seeing an emergency room doctor. You’re glad he’s there, he can probably help you, but you’d just as soon not have almost cut off three fingers with your bagel slicer.

So we split the series and got the hell out of Dodge before anyone else almost got killed. Sunday night, I had my pal Jay-Z over to the apartment to play some Jenga and watch HBO just to decompress from a really stressful week. So we’re on our third game of Jenga — yeah, I’m very good at it, I’m not bragging, the facts are the facts — and Jay asks me, “DJ2, if you had one of those Game of Thrones guys who’ll kill someone for you if you just give them the name, whose name do you say?”

I mean, that’s easy. “Jonathan Papelbon.” I even said it out loud a couple extra times just in case one of Jay’s boys is secretly one of those magical murder guys, or maybe even a smoke monster that comes out of a witch’s haunted vagina. No, it’s probably not going to work, but you have to try anyway. Winter is coming, asshole. Even if you play in Philly now, it’s not that far from Boston, relatively speaking. You more or less have similar weather patterns.

And speaking of Boston, how about that 17-inning game with Baltimore? They had Darnell McDonald pitching at the end. I know their closer situation has been bad since Papelbon left, but is Darnell McDonald really the answer? Bobby V thinks he’s such a tactical genius, he always has. He’s not really outsmarting anyone with that move.

Everyone’s all upset about how Cole Hamels drilled that Bryce Harper kid for no reason. All I’ll say about it is: Bryce Harper’s going to look pretty damn good in right field for us in six years. Go easy on him, Cole, you’re going to be teammates sooner than you think, maybe learn to get along now and ease the transition period a little bit. You don’t want things to get awkward at Parents’ Night at your kids’ preschool in Alpine.

The day started out pretty rough when Mo’s agent started talking about “complications” in his knee surgery, but then the team is saying they don’t think it’s serious. You don’t know what to believe, other than serious complications are probably going to screw up his chances of pitching for us next week against Seattle. That’ll be a great warm-up game for no. 42 to test out his miraculously repaired knee. Their best hitter is Felix Hernandez.

Tonight was D-Rob’s first post-Mo save. Yeah, it was a little rough, he loaded up the bases before locking it down, but you gotta start somewhere. And with Mariano coming back in five to seven days, he’ll probably only get two or three more chances. It’s good practice for when he gets the job full time in 2015.