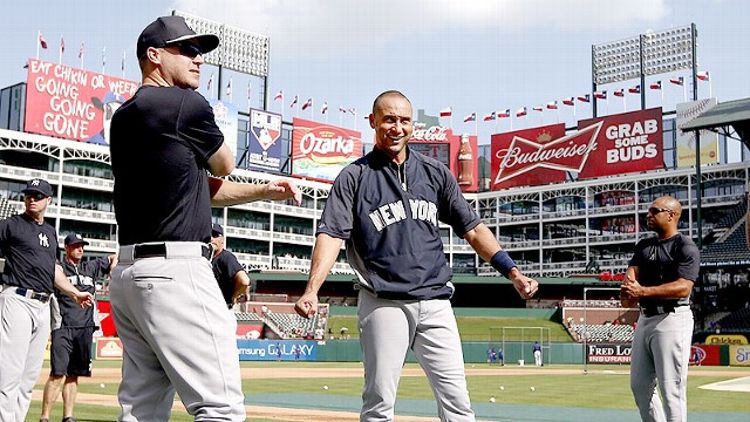 The second half’s a fresh start. Not just for me, but for the team. Maybe we didn’t have the best first half, but considering all the adversity this team’s dealt with — the unbelievable amount of injuries, all the part-time players trying their best to be everyday guys, the absence of a Captain in the dugout — you have to be optimistic about where things stand. No, we’re not in first, and anything less than first place is an unacceptable position that makes you sick to your stomach just to think about it, but I’ve said it before and I’ll say it again now: The standings don’t count until September. It’s a fact. They’re not going to pick the playoff teams tomorrow. They pick them more than two months from now, at the end of the season, after all the games have been played on the field and not in the minds of people who think they know what’s going to happen. If you could predict baseball, you could make a lot of money in Vegas. You hate to encourage people to bet on sports, but if I were the betting type (and I’m not because that’s not the kind of thing an active player should be involved with in any form), I’d probably risk my life savings on the Yankees being there in September. Look at the playoffs since 1995.

Again, I’m not suggesting anyone gamble. This is just a rhetorical kind of betting situation.

And you’d have to assume diary confidentiality would apply here if someone were to make an issue of it. Which they wouldn’t, because I’m obviously just showing the kind of unshakable confidence my team could really use right now.

But if you bet your house on the Yankees right now, you would almost definitely have two houses by the beginning of October. And that second house would be pretty nice.

So they put me on the DL. Again.

You hate being on the DL. When I’m hurt, I’m more of a day-to-day guy, not a 15-days-on-the-shelf guy. When you’re day-to-day, you at least have the chance to convince the manager that you can play. You can show up early to the park, take some extra ground balls and BP, run the bases a little bit, and stand over the skipper’s shoulder until he feels pressured into writing your name down on the lineup card. If you’re not too visibly limping, they’ll give in more often than not, even if it’s just to stop the comments like “You’re not really going to DH a backup outfielder again, are you?” or “I think I overheard him asking a trainer to get him some ice for his groin” or “I guess we can afford to give one away today, huh?”

When they put you on the DL, they rob you of your ability to talk your way into the lineup. You understand that maybe they need the extra roster spot while you recover, but at the same time, you know that they’re only going to use it to call up a utility infielder who’s hitting .200 in Scranton. You’d take a Captain at 60 percent every time over 100 percent of a guy who’ll be failing his real-estate license exam in two years. It’s an easy calculation. You don’t even need a binder to do it.

This is where someone might point out that the Zoilo Almonte–through–Chris Stewart part of the lineup went 2-for-18 tonight. I wouldn’t do that, because they’re trying their best. The effort is there.

But maybe 45 percent of a Captain would have been enough. You’d have to check the binder to be sure, though.

This was exactly the kind of win you look to when you wonder if this depleted team can stay competitive in a tough division while the injured guys get better. A strong start by Kuroda, another save by Mo, a big day by Overbay. They tell me the Sox are in first place, so it’s nice to come into Fenway and get a W while the Boston fans are still engaged enough to throw some garbage at the bullpen catcher, maybe a frozen hot dog or a vocational school class ring at the guy in the on-deck circle if they’re feeling chippy.

It’s a fun atmosphere in years when they’re not demoralized by players who seem to hate their city. You love playing there at times like these. It’s a great baseball town sometimes.

This might have been our toughest game of the season. You don’t even want to think about it. It makes you queasy to think about all the blown opportunities. And it’s that much tougher when you scrape by into extra innings and don’t get the job done. When you have to watch the pileup at home plate after a walk-off homer to a guy whose beard looks a little unsanitary. You hate that feeling more than anything. That beard doesn’t help things.

You just want to go back to the hotel and go to bed after almost five frustrating hours of baseball.

So you do. And you lie down.

But then there’s a knock at the door.

It’s room service you didn’t order. The bellhop won’t take no for an answer. You’re too tired to argue.

Then he rolls in the cart, lifts the dome on the platter, and reveals something you definitely didn’t order.

Which immediately begins to ring.

And you answer it. You know you shouldn’t, but you do.

“I’m safe, Jetes. I never heard from you and I just wanted you to know that.”

“Did you hear about my quad, Jetes?”

“I heard something around the clubhouse.”

“That’s quite a coincidence.”

“Maybe we can go back to the team together, Jetes. That’d be special.”

“Ask me where I am right now.”

“I can’t tell you that, Jetes. They might be listening.”

“No one’s listening, Alex. This is the phone you sent.”

“Let’s just say I’m looking at five rings right now. That’s code for where I am.”

“They’ll never figure out where I am.”

“Are you in my house again, Alex?”

“I could be anywhere with five rings, Jetes. Like the Olympics. Or five small circuses.”

“You have to leave my house, Alex. Right now.”

“I have to go. They’re probably listening. I HAVE TO GO SEE THE OLYMPIC ELEPHANTS.”

“They’ll never catch me. I can live on dry Wheaties for a month.”

Then the line goes dead.

I try to call him back, but the number is already disconnected.

Before everyone asked about my ankle.

Now everyone’s asking about my quad.

There’s nothing to say. I feel nothing. Is there anything better than nothing? Not when you’re referring to a quad that’s no longer strained.

And yet I’m still on the DL, getting treatment I don’t need, waiting around for my time to be up.

No one wants to talk about the game. A game we came back to win in the ninth, by the way, against their All-Star closer.

Everyone wants to talk about Ryan Braun.

You can’t speak for another guy because you never know another man’s motivations. The only motivation you understand is winning. Winning the right way. Apparently not everyone thinks like that.

You suppose it’s good that they’re trying to clean up the sport and catch the guys who are taking shortcuts, but it’s bad that there are still players out there thinking they won’t be caught.

There are no shortcuts to winning. Only longcuts.

And make sure to lock up your ring room on a long road trip.