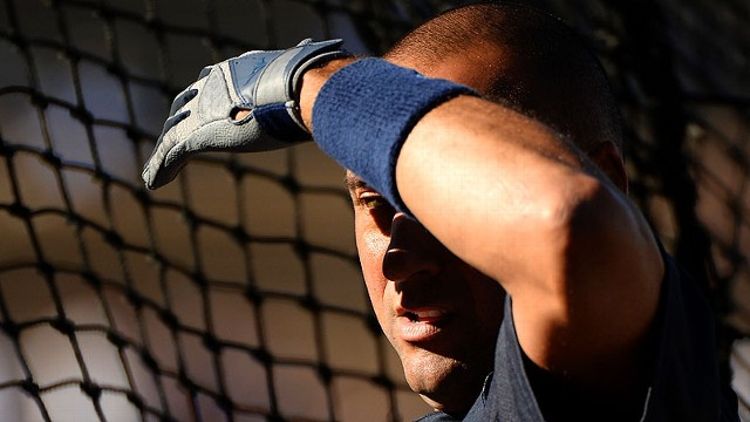 One run tonight. One run.

You hate to be negative about the offense, because there’s no doubt that the six or so fill-in guys playing every night are doing everything they can to put runs on the board, but it seems to take a shutout for us to get a W these days. When you think of the Bronx Bombers, you don’t think about shutouts and eking out 2-0 wins. You think about high-scoring games at new Yankee Stadium and home runs and then the local media complaining that we’re too reliant on the home run. Well, sometimes you get what you ask for. We’re not hitting homers, and we’re also not scoring. And we’re also not winning games at the clip we’re accustomed to.

When you can’t be out there helping out the offense yourself, sometimes you find yourself running down the lineup card and doing a little analysis. Maybe you even write it in your diary just to get it on paper.

1. Brett Gardner, CF (one of the most reliable hitters on the team, great leadoff guy)
2. Ichiro Suzuki, RF (getting gray in the temples and seems too tired to talk to his bats anymore)
3. Robbie Cano, 2B (carrying the entire offense and playing for a giant contract)
4. Lyle Overbay, 1B (tends to faint in the on-deck circle when a lefty is on the mound)
5. Vernon Wells, DH (great teammate, it kills you to see him go two months without hitting it out of the infield)
6. Eduardo Nunez, SS (hitting .225, and not the kind of .225 where you forget it’s .225)
7. Brent Lillibridge, 3B (no idea who he is, possible batboy mix-up)
8. Melky Mesa LF, (I think Girardi is making up some of these names out of desperation)
9. Chris Stewart, C (very tall and handsome for a catcher)

I need to be back in that lineup yesterday.

Kuroda threw a shutout. And we won. You hate to point it out when your analysis is proven totally accurate, but that’s some Jetestradamus stuff happening.

I ran the bases. Got a good sweat going, which is a news story. Apparently it’s also news that someone forgot to get enough Gatorade cups. Apparently I got the cups situation straightened out for everybody. Apparently I’m in charge of keeping the beverage station stocked. As Captain, you’ll do whatever’s necessary for the team to function smoothly, even if that means filling the Gatorade jug yourself so there’s something to dump on a guy after a walk-off. There’s no detail too small in winning. I’ll even pick out the Gatorade flavor if I have to. (Lemon-lime. We’re not doing any of that blue Glacier Freeze junk on my watch.)

I tested the quad. Feels good. I didn’t feel anything. Nothing to report. No story to be told, except this one:

It’s up to them to put me on that lineup card on Saturday when I’m off the DL. Like this:

I’ll write it on there myself if I have to. Red Sharpie so no one misses it. Everyone knows the red Sharpie is the best of all Sharpies.

No detail’s too small.

Alfonso Soriano’s back. Cashman finally brought him home. He had a nice run here before they flipped him to Texas for A-Rod, and we were all sad to see him go, even if we were getting back the best player in baseball at the time. Vernon even gave him back his old no. 12, because that’s the kind of guy Vernon is, and maybe also because that number was starting to feel like it didn’t have any hits left in it. But it’s still nice to see Sori in a Yankee uniform again.

That being said, you have to re-earn your pinstripes.

It doesn’t matter what you did between ’01 and ’03, or that you almost went 40-40 once. When you leave the Yankees, you have to win your way back in. You have to find out the hard way what flavor’s in the Gatorade bucket.

Maybe he was wearing pinstripes, but he hasn’t earned them yet.

No, they didn’t activate me today. But I played in a secret simulated game in Staten Island, away from the press and stories about my sweat and thirst levels. In case you’re curious, I sweated and I got thirsty.

There were plenty of cups.

When I get home there’s a birthday cake on my doorstep.

My birthday was in June.

There are 38 candles on the cake.

I pick up the cake and take it inside. When I cross the threshold it starts playing a muted song.

Only then do I notice that the happy-looking baseball clown underneath all the candles has a horse’s hindquarters. And that the song is “Rhythm Is Gonna Get You.”

I dig into the cake and find a cell phone inside. I flip it open.

“You just used my name.”

“You can’t be too safe, Jetes. They’re everywhere.”

“Mr. Clean or whatever.”

“That’s not the codeword. The codeword is ‘happy birthday.'”

“Is it your birthday, Alex?”

“You know it is, Jetes. Thanks for the cake.”

“You sent me a cake exactly like the one you’re looking at. It was very considerate of you. You’re a great friend.”

“When are you back in the lineup?”

“That’s not going to work for me, Jetes. They’re holding me out. I can’t be out there with you.”

“Who’s holding you out?”

“The team needs me tomorrow.”

“It’s my birthday wish that you’ll wait for me and we’ll go back together.”

“I have to play tomorrow.”

“Fine. I’ll use my birthday wish to give Bud Selig a heart attack.”

“Me too. I have to send flowers to the Selig family.”

“You never said the codeword, Jetes.”

I put the phone back inside the cake and go to bed. I’m in the lineup tomorrow.

You show up at the park early, because it’s Hideki Matsui’s retirement ceremony and he’s always been one of your favorite teammates. It’s a moving event. It’s nice to see a true Yankee, a World Series MVP, retire in pinstripes among his old friends. You know that’s exactly how it should be. You make sure that his old locker is jam-packed with vintage pornography. You watch his face light up because he’s so happy that you remembered.

And then the game starts. You tell yourself, “I’m going to swing at the first pitch, no matter what.” Because maybe you’re a little rusty, a simulated game can never really substitute for the real thing. You know you need to be aggressive and shake that rust off as quickly as possible.

And then you get an outside fastball on that first pitch, and you swing.

And you watch as the ball lands in the second row in the right-field seats.

And later you watch from first base as your newest old teammate, the one who’s just come back after a decade away, hits a walk-off single in the bottom of the ninth.

You watch as he re-earns his pinstripes.

You watch as he figures out what flavor’s in the Gatorade bucket.

You picked it out yourself.

Arrived in Los Angeles. We don’t see the Dodgers very often, but every time you get to play in Dodger Stadium it’s a special trip. It’s an enchanted place for baseball. Starting a game in front of a half-empty stadium that — poof! — suddenly fills up by your second trip to the plate is a unique experience. The empty stadiums in other cities just stay empty; you don’t even get those four to six good innings out of the crowd.

You have to like what Magic Johnson has done with the ballclub. He’s like the Boss in that he realizes you have to spend money on players to put fans in the seats. Maybe you’d prefer it if he weren’t spending that money on all the crazy contracts the Red Sox gave out before they chased Theo Epstein to Chicago, but overall it’s a good thing for baseball when it has superteams in its most important cities. And L.A.’s always a place that loves its stars, as long as they’re winning. Conditional love is better than no love at all. Ask any Laker fan.

Can’t wait to get out on the field tomorrow. Should be a fun series.

A strange thing happens at the hotel this morning. I’m standing on my patio overlooking the infinity pool when a very large crow lands on the railing beside me. I notice something tied to its leg.

So I open it. There’s a message written in elegant calligraphy:

We have found him.

It won’t be long now.

I pick up the phone and consider calling Alex.

But then I put the phone down.

Sometimes you just have to let history take its course.

I nod to the crow and it disappears into the sky.