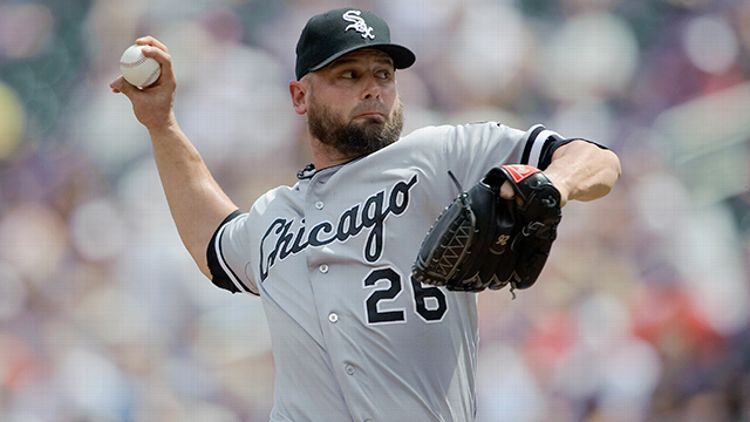 The third announced deal of the day was also the most surprising. The Tampa Bay Rays struck an unusual deal with the Chicago White Sox, acquiring All-Star relief pitcher Jesse Crain in exchange for … well, something. Officially, the bounty has been classified as future considerations — of cash. But multiple reports confirm the White Sox will choose from a list of players agreed upon by the two teams. That list will likely depend on how much Crain pitches for the Rays.

Therein lies the rub. Crain has been on the disabled list with a shoulder injury since June 29. The White Sox had hoped to get him back by July 31 to facilitate a trade. Instead, Crain is now a Ray. For the White Sox, dealing him before the 31st ensures that he doesn’t need to pass through waivers for a deal to happen. They reportedly tried to package him with starting pitcher Jake Peavy, but couldn’t find the right trading partner to make that work. The Sox are now saying they plan to build around Peavy; given we’re talking about an injury-prone 32-year-old who’s eligible for free agency after next season and a team with a weak farm system and little frontline talent in the big leagues, that seems like a big, fat bluff.

For the Rays, getting a deal done now means not having to sweat the possibility of other teams blocking a trade; given that Tampa Bay now owns the best record in the American League, that would have left a lot of lesser teams with higher waiver priorities free to prevent Crain from ever making it to the Trop.

Moreover, they’re getting a great pitcher in Crain, assuming he’s healthy. In 2013, Crain has struck out more than 30 percent of the batters he’s faced, with a 0.74 ERA and 1.51 FIP, with zero home runs allowed in 36⅔ innings. As Jason Collette, writer for the excellent Rays blog The Process Report, noted, Crain has struck out 31 percent of the 346 batters he’s faced since the start of last season, with just five homers allowed, and a .195 opponents’ batting average. Crain was one of the least prolific strikeout pitchers in the game at the start of his career, whiffing just 39 batters in his first 97 major league appearances (hat tip, @baseballcrank). This was odd for a pitcher who routinely pumped his fastball up to 93-95 mph. But Crain eventually figured out that he should throw his bread-and-butter pitch, the slider, more often. With that increased usage has come dramatically increased success. He’s just a rental given he hits free agency after this season, but he should help.

The Rays needed the help, too. Joel Peralta has been a master escape artist all year long, wiggling out of huge jams either on his own, or with an assist from teammates and umpires. But the Rays have been concerned about his workload and had sought ways to offer some relief. Ditto for closer Fernando Rodney, who has now handled 17 save chances in a row successfully, but often done so in heart attack–inducing fashion. Crain might need at least a couple more weeks to heal, but the depth he figures to provide down the stretch and in the postseason (if the Rays make it that far) could prove to be huge for the team’s chances.

What made the trade truly surprising was the Rays’ track record at the trade deadline. In the team’s 16-year history, Tampa Bay had only made two true non-waiver deadline trades that qualify as true buys. On July 31, 2010, the Rays acquired right-handed reliever Chad Qualls for a player to be named later, adding a pitcher who’d put up an 8.29 ERA to that point in the season. Then on July 24, 2012, Tampa Bay traded C-level prospect Tyler Bortnick for superutility man Ryan Roberts, who’d hit .250/.306/.357 to that point in the season. And that’s it. The last time it had ever dealt for an All-Star under any circumstances was a November 2003 swap for Tino Martinez.

So by Rays’ standards, this was an absolute blockbuster. As unbeatable as the team looks right now, with rookie Chris Archer tossing two shutouts in his past three starts, fellow rookie Wil Myers tearing the cover off the ball, David Price setting an all-time record with just one walk (against 35 strikeouts) in July, and the team winning 22 of its past 26 games and hurdling the Red Sox into first place, there are still a lot of games left to be played and a lot of obstacles to overcome. Every little bit helps, and a healthy Crain qualifies.

The Tigers and especially the Braves figure to have much easier paths to the postseason, by virtue of playing in much, much less competitive divisions.

Even with the streaking Indians winning five in a row, Detroit still holds a 2½-game lead in the AL Central, and an edge in talent and run differential suggests the team was underachieving due to a poor record in tight spots — 10-14 in one-run games, 3-9 in extra-inning games — which could be helped with bullpen upgrades.

The Tigers got one on Monday, nabbing Jose Veras from the Astros. A journeyman who’ll join his seventh team in Detroit, Veras has put up the best numbers of his career this year in Houston. A shutdown pitcher against right-handed hitters (.214/.308/.344 against them for his career, .160/.250/.307 in 2013), Veras has fared well against lefty swingers this year, yielding a line of just .221/.298/.316. A three-pitch pitcher with a 93 mph fastball, a curve, and a splitter, Veras has struck out more than a batter an inning this year, slicing his walk rate to career-low levels.

For non-fantasy purposes, Veras’s role is far less important than his ability to add another quality arm to a bullpen that’s had no reliable options other than converted starter Drew Smyly and setup man turned closer Joaquin Benoit. There are few holes easier to fill at the deadline than those in the bullpen, and the Tigers roster set up perfectly in that regard, with Veras addressing the team’s chief need among a cast of stars that makes Detroit the odds-on favorite to win its division, even with the Indians in the rearview. With one of the best and deepest starting rotations in the game, having three quality options in the pen may well be enough to carry the Tigers deep into the playoffs, especially when complemented by the planet’s best hitter in Miguel Cabrera and an able supporting cast. The Tigers hold a 2014 option on Veras at $3.25 million, so he’s a bit more than the rental that Crain is.

In return, the Astros picked up 19-year-old Danry Vasquez, an outfielder playing in the Midwest League and a player to be named later. The Venezuelan left fielder was the Tigers’ sixth-ranked prospect coming into this season according to Baseball America. But he’s hitting a modest .281/.333/.390 this year, and there are questions about his power, especially if he hopes to play a power position like corner outfield at higher levels. He’s a nice lottery ticket for the Astros to get in exchange for a scrap-heap pickup like Veras, but not someone the Tigers figure to miss, one way or another. (Oh, and Jose Cisnero is probably your guy for saves in Houston, if you actually are a fantasy player.)

The Braves have far less to sweat than even the very talented Tigers. Holding the biggest lead of any division-topper at nine games, it would take either a gigantic collapse by Atlanta, a massive run by the underachieving Nationals, or both for the Braves not to play into October. As noted in this week’s edition of The 30, this created an intriguing decision for the Braves. They could either aggressively pursue a splashy trade, knowing that any deal for one of the best available players at the deadline would likely carry a heavy price, or they could stand pat, figuring they’d probably make the playoffs no matter what.

Turns out they chose … neither. Apparently content to go to war with a Tim Hudson–less rotation, the Braves instead addressed their other obvious need, acquiring left-handed reliever Scott Downs from the Angels. Wielding a fastball and curve, Downs has consistently one of the most prolific worm-burners in the league, with a ground ball rate greater than 60 percent in each of the past three seasons. Though he might not produce the kind of results that a healthy Jonny Venters and Eric O’Flaherty did at the top of their games, he should bolster the pen with both Venters and O’Flaherty out with season-ending injuries. Downs has allowed lefties to hit just .207/.273/.294 for his career. He fares much worse against righty hitters, but not so badly that letting him face one on occasion is a deal-breaker.

Unlike the potential talent loss that a deal for someone like Peavy might bring, the Braves landed a useful upgrade in Downs without giving up much of consequence. As ESPN.com’s Keith Law wrote, 25-year-old right-handed reliever Cory Rasmus has posted robust strikeout rates throughout his minor league career, but with the kind of fly ball tendencies that make him potentially flammable in the big leagues; he ceded four homers to the first 31 batters he faced in the majors, and his unimpressive fastball-slider pairing might not play well at the highest level. When all is said and done, the Braves might end up landing more help for a lower price than virtually any other team at the deadline.