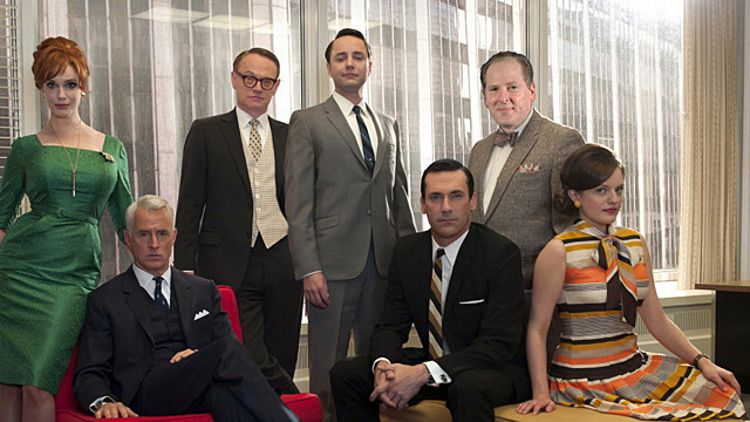 Shortly after the Minnesota Timberwolves sent out a press release announcing that David Kahn’s contract as president of basketball operations was not being picked up for the 2013-14 season, Kahn appeared on KFAN FM 100.3 in the Twin Cities to talk about his tenure with the team. At the end, when host Dan Barreiro asked him what his immediate plans were, Kahn said, “I’ve got two Mad Men episodes backed up on my DVR. I’m going to watch Mad Men, maybe have a glass of wine.”

So here, of course, is David Kahn’s draft-board assessment of the characters of Mad Men.

This guy’s a go-getter: He reminds me of a young me. He plays with confidence, plays bigger than he is, looks very smooth out on the floor. Sure, he can come off as abrasive, slimy, and condescending, but I don’t necessarily see those as negative things. And the way he strings a situation along to the point where the result is less a decision than a sadly inevitable conclusion lacking any of the concrete benefits that more decisive action would have brought? Masterful.

I think Harry’s going to be an All-Star one day. If you look at his leadership capabilities, at his charisma, I think you see a guy who’s going to be the face of Sterling Cooper Draper Pryce. That doesn’t mean he doesn’t have areas where he needs to get better. His game can be a little rough around the edges. But I like that passion. I mean, this is the guy who got the Rolling Stones to sing about baked beans. I would put him on my team — maybe get him a personal chef because, you know, White Castle — in a heartbeat. A heartbeat.

I mean, obviously, her conditioning isn’t there yet. I thought she had a really, really rough fifth season. For whatever reason, her confidence was shaken last year — I don’t know why. But she’s obviously a loving and devoted mother who would never, say, slap her daughter for cutting her hair. Both Kurt Rambis and Bill Laimbeer feel that if it ever works out for her — psychologically — she could be one of the top three or four wives in the league. I recommend a steady regimen of knuckle push-ups and she’ll be back in that blue dress in no time.

I think that Lane Pryce came over here way too early. However, the people at Putnam, Powell & Lowe saw the talent and the skill that he has. He went through a rough patch with Sterling Cooper — he couldn’t handle the lifestyle. But with Sterling Cooper Draper Pryce, it’s like manna from heaven. Nobody is jumping up and down yet — what Lane has to do is put a whole season together. But I think he’s the future of this franchise. Wait: He’s what? In that case, I’d take him with the 57th pick of the draft.

Frankly, I’m on the fence about Sally. Even very early on, she showed a cruel streak and was often vindictive, petty, deceptive, and prone to moodiness. But then there are the negatives to consider. For example, she still hasn’t gotten me the written report I asked her for.

Let’s not sidestep the issue here: Roger has made mistakes. Maybe he took a little too much LSD, but he’s told me he’s not taking it anymore, and I told him that I would trust him as long as that was the case. And I’m not worried about the acid (or the drinking or the smoking). If you had given me this kind of money and put me in this kind of world with these kinds of pressures attached to it and some of the demands, I don’t know how well I would have handled it. After those heart attacks, I think he knows he needs to change. There’s no evidence yet to suggest he won’t, meaning that he should be able to grow from these mistakes. The important thing is to admit your mistakes, then never think about them again.

Don’s on a journey from individual to team right now, and he has to understand his role. He needs to win back the respect and admiration of his coworkers and clients. I think he will make the journey successfully, but I wouldn’t have made him a senior partner. I like him a lot. We share the same hometown. We share the same college. At least, that’s what he told me, and I tend to believe people unless I have evidence that they’ve been duplicitous in the past.

This show has a habit, and I am just going to say habit, of producing some pretty incredible story lines. Megan’s rise from receptionist to trophy wife to award-winning copywriter to soap opera star seems at least as unlikely as that kid with the bow tie bringing home the no. 1 pick for the Cavs. But as soon as I saw her in “Christmas Comes But Once a Year” in the fourth season, I knew it: We were done. I told Kevin (with whom I watch every episode of Mad Men): “We’re toast.” The only reason she’s not ranked lower is “Zou Bisou Bisou.” I’m not a monster.

The only way I’m taking Joan is if I’ve gotten Megan with the pick immediately preceding. I know people say they won’t be able to play together, but listen: I know Joan isn’t getting out of her current contract without a 5 percent stake and a partnership. If Aerosmith could start Alicia Silverstone and Liv Tyler in “Crazy” in the ’90s, I don’t see why Joan and Megan couldn’t be a successful backcourt.

Personally, I think Peggy was handled about as well as possibly could have been expected, given the circumstances. She wanted to leave and there was nothing — short of more respect or a bigger role or the money that she deserved — that was going to keep her at SCDP. Rather than deal with it, I think Don made the right choice by completely ignoring it until it was too late. I think Ted Chaough’s a great guy. I consider him a friend and I’ve shared many an Old Spanish with him.

Unanimous Animus: The LeBron James MVP Vote and Debunking the Myths of 'Value'