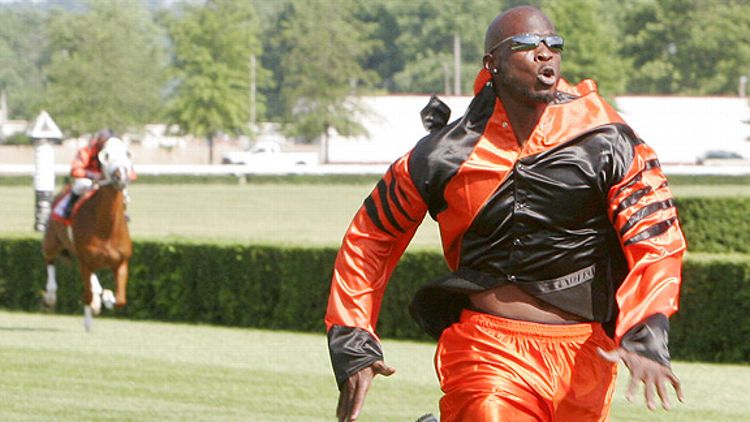 So Chad Ochocinco is going to stay with a fan for the first few weeks of the season? How shocking! Wait. “Shocking” isn’t the right word. “Predictable” is a better choice. How predictable!

By now, Ochocinco’s stunts have run together in our collective memory. They’re ostensibly funny, but unlike actual jokes, they never have punch lines. His ploys are all exposition without a big laugh at the end to make them worthwhile. If Ochocinco did stand-up, his routine would be full of bits like this: “So a penguin walks into a bar. Orders a whiskey and soda. Then pays his tab and leaves without incident. Goodnight, folks!”

The NFL’s Most Interesting Man?

Ochocinco’s antics seem like they should be memorable, but they’re not, probably because of this consistent lack of a final payoff. The stunts end up being totally forgettable because there’s no real reason to pay attention to them. Instead of big laughs or enduring moments, we end up with fuzzy memories like, “Am I nuts, or did he once tell reporters he had a deer in his garage? And didn’t he race a horse one time?”

The real shame of his increasingly bland hijinks is that the early touchdown celebrations that put Ochocinco on the map were often legitimately funny. His “Dear NFL, PLEASE don’t fine me AGAIN!!!!!” sign from 2003 was pretty great, as was his “putt” of the ball with the end zone pylon. Knowing Ochocinco had some antics ready to roll made even Bengals games exciting, which is no small feat.

Since then, though, Ochocinco’s stunts have devolved into the NFL’s version of bad, pretentious performance art. There’s no message or joke. Instead, he’s just being weird for the sake of being weird. He’s not making some broader point or digging toward a deeper meaning. The only message is “Dude, look at how loco I am! I am one zany guy! It’s a laugh a minute with me around, isn’t it?” The stunts are ultimately harmless, but they’re also unrewarding for fans.

This living-with-a-fan decision is just another sideshow in the same vein. Don’t we already know how it will play out? Ochocinco will pick some Pats-obsessed guy, preferably one with an outlandishly thick Boston accent, and spend a few days crashing in his guest room. Talking heads will lament that Ochocinco isn’t taking the upcoming season seriously. Bill Belichick will scowl. Ochocinco will mug for the cameras.

Then he’ll move out. By this time next year, we’ll be wondering if our memories are failing us. Did Ochocinco really live with a fan for a couple of weeks? Nah, we’ll assure ourselves. We’re probably confusing that incident with the time he tried out for an MLS team. Or maybe it was riding a bull? Hard to say. All we’ll know is that Ochocinco was consistently wacky and outrageous! Just ask him. If you need to find him, he’ll probably be arm-wrestling a bear.