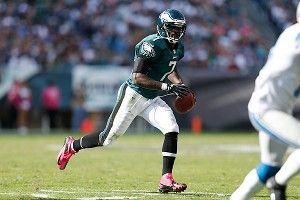 Back in the early 1990s, when I was in college, I had a friend we called “Cow.” Like me, Cow had a terrible gambling problem and an even worse gambling theory. Cow swore that every NFL night game was fixed. “Don’t bet it, it’s a good fix.” We would laugh at him — mostly because he weighed more than 300 pounds, had an extra row of teeth, and was missing a baker’s dozen worth of chromosomes. But also because it was an outrageous theory. How could the NFL fix all the night games on their schedule without anyone noticing except for an obese imbecile who grew up too close to a nuclear power plant in upstate New York? Well, I’m beginning to think Cow was right.

Every week there appears to be a night game that keeps you wondering. Some weeks have multiple head-scratchers. Here’s a recap of the fishy final scores/endings:

Week 1: Dallas beats the Giants 24-17 on the road. OK, so it’s the season opener and teams will tend to play sloppy. This one saw 17 penalties and the Cowboys making all the right calls and winning a close game down the stretch. Huh? We’ll call this Head-Scratcher no. 1.

Week 2: Green Bay 23, Chicago 10. Sixty minutes of nothing out of the offensive juggernaut Packers except for a fake punt/touchdown.

Week 3: Baltimore 31, New England 30. Several controversial calls leading to a last-second field goal on Emmy night. The announcers get awards for acting like nothing was wrong.

Seattle 14, Green Bay 12. I forget … was there anything weird about this one? Oh yeah — the worst game-deciding call in the history of the NFL.

Week 4: Baltimore 23, Cleveland 16. Anytime Brandon Weeden has a chance to tie a game (any game — let alone against the Ravens in Baltimore) with a last-second Hail Mary, you have to wonder if things are kosher.

Week 5: New Orleans 31, San Diego 24. There was no way the refs were letting the Saints lose this night game in New Orleans. Not a chance. Now we’re getting into Kennedy conspiracy territory.

Chicago 13, Detroit 7. Wild last-second cover after the Lions struggled to move the ball for 57 minutes.

I don’t even really know what I’m saying when I propose that the game is fixed. The referees agree to call a one-sided game? The players agree to give up to screw the gambler? Probably not. I realize it doesn’t make a ton of sense. It’s like those dopes who leave a blackjack table because they don’t like the dealer’s ethnicity. Most likely, this is just in my head, but I dare you to try to make money betting night games exclusively. You’d have a better chance turning a profit selling Girl Scout cookies to Michelle Obama.

Here’s why I like this bet: The Pats are not going to take their suspect secondary for granted. The earlier the scoring, the better. On the other side of the ball, the Rams have a placekicker who can make a field goal from Brussels. I expect a lot of early scoring in this one. I’ll take the cheeri-over. 10,000 jermajesties

I love this bet. Between the two teams, there are over a half-dozen players on offense (actually, 7: R. White, J. Jones, Rodgers, Turner, Maclin, D. Jackson, McCoy, and possibly Vick) who can help you cash this bet. And that’s just on offense. Air it out, birdmen! 10,000 jermajesties

Giants to score over 25 points vs. the Cowboys

This bet worked nicely for me back in Week 2 when VD’s opening touchdown of the Sunday-night game against the Lions shot penicillin into our bank accounts. Look for a repeat performance from Davis after being completely shut down last week. 3,000 jermajesties

In the NFL’s 93-year history, no team has given up more yards in the first six games than the 2012 New Orleans Saints. 2012 — that’s this year. Peyton Manning will rack up a few Mile High frequent flier miles (are you listening, airlines looking for a young, fresh face to deliver endorsements?) passing this week. Drew Brees isn’t too shabby in a catch-up role himself. Bet them both. 4,000 jermajesties each

Over/under 16.5: Dislocated braids suffered by RG3 this Sunday vs. the head-hunting Steelers defense

I’m actually waiting for the study showing that properly stacked hairstyle can prevent football-related head injuries. Brace yourself — we could be three years away from seeing Lil Wayne lead the L.A. expansion team to its first division title.

Did you know that in Great Britain “the Tuck Rule” refers to when a drunk hooligan hides his manhood between his legs so that he can get free bangers and mash at Ladies’ Night? Not sure, but I could totally be making that up.

Wait a second, does holding up an ice cream truck for the phenylethylamine found in Good Humor bars count as a drug crime? If so, I might cancel this bet.

Over/under 3.5 million: 7-year-old girls will tune in to this Sunday’s Dolphins/Jets game

Not only did the league and DirecTV ignore my billion-dollar idea of color-correcting pink on TV screens according to how much people donate to breast cancer research, they’ve stepped up their cotton candy crusade to humiliate players even more. This Sunday, the referees in the Jets-Dolphins game will be carrying pink penalty flags. I knew it was coming, because there’s never a better time to remind everyone of this horrible disease than after a 250-pound man launches his helmet into his opponent’s skull. Just fit the penalized players with tutus and let’s be done with this already. (Don’t shoot! I donated!)

Over/under 3.5: Baseball fans who actually recognize ANY of the sitcom stars of whom Fox shows crowd cutaways during their World Series telecast

Seriously … the third lead from The Mindy Project? It’s a shame Mork went on to do his own thing.

Over! I realize I just jinxed the shit out of this bet. Oh well — it was fun while it lasted. And how ironic will it be when Romo (Sergio, this time) blows two saves this weekend for the Giants?

2/1: Odds the person responsible for telling Ozzie Guillen he was fired was wearing a bulletproof vest at the time

Hopefully the fact that Guillen is still to be paid out $7.5 million over the next three years quelled his temper tantrum. That’s a lot of Fidel Castro memorabilia!

Over/under $350,000: Amount, in dollars, for which the man at the end of my hidden camera bit successfully sues Jimmy Kimmel Live after developing an infectious disease from eating Spumoni Gardens pizza off the floor

The good news is, I’ve finally met a Giants fan I like. And, as a bonus, he’s of the sleeveless variety.

That’s that. Enjoy Week 8. Also, enjoy Jimmy Kimmel Live in Brooklyn next week. Guests include but are not limited to: Ripa, Colbert, Stewart, Stern, and Letterman. Yes. David Letterman.