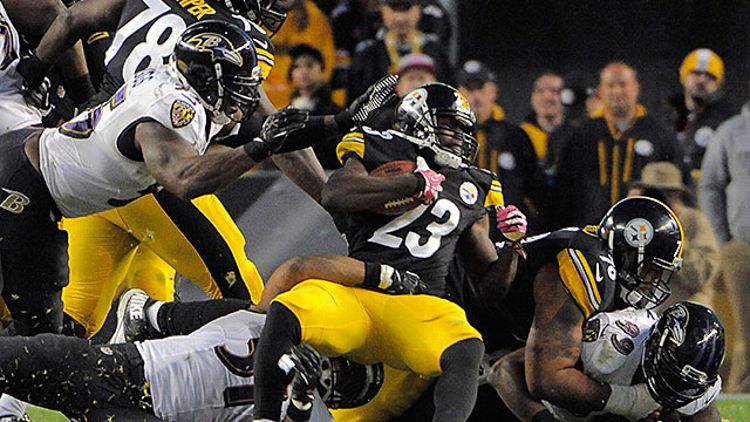 Raiders will score over 18.5 points vs. Cowboys

As a devout Cowboys fan, I am more than familiar with this team’s pattern: disappoint, stun, disappoint stunningly. We’re unfortunately up to the third leg of that equation. Mark my words: Dallas will struggle with the Raiders. This Cowboys defense has given up 38, 19, and 30 points in their last three Thanksgiving games. If you look, you’ll see each of those is more than 18.5 points. Matt McGloin’s best game (three TD passes) came on the road against a Texans defense that’s superior to the one he’ll be facing Thursday. I’m hoping for another Dan Bailey bailout. 20,000 jermajesties

Steelers/Ravens under 21 points scored in the first half

One of the great rivalries plays out Thanksgiving night. Ravens-Steelers is like watching a chess game between two old Romanian men freezing their asses off in front of 60,000 fans with heartburn. In their Week 7 matchup, the teams combined for two touchdowns. (19-16 final). The Ravens offense ranks 20th in the league in red zone touchdown percentage, which is stellar compared with the Steelers, who register 31st overall. 25,000 jermajesties

Titans first half +3 over Colts

Going against the Colts in the first half is the pecan pie of NFL wagering this year. Reliable, satisfying, and if you hit it at the right time it won’t make you sick at the end of the night. I used to think the Colts in the second half was the call. Not so much anymore. Indy’s opponents have covered each of their last four games in the first half. The Titans play stout defense, and backup quarterback Ryan Fitzpatrick is becoming comfortable in his own skin. And now if you’ll excuse me, I’m going to swallow arsenic-laced Pez for saying someone was “comfortable in his own skin.” 30,000 jermajesties

Browns (+3.5) over Jaguars
The surging Jags (is it possible for those two words to connect?) can be expected to come down to earth after they realize they’re an MJD broken tackle away from blowing the first overall draft pick. Warning: Proceed with caution. Sports-ish Guy Bill Simmons and I have a sizable wager on the Jags under 2.5 wins for the season.

Bucs (+18) over Panthers
Go ahead and have your fancy fourth-quarter comeback this week, Cam Newton. I’m getting 18.

Saints (+16) over Seahawks
I realize betting against the Chea-hawks at home is about as smart as betting on Alec Baldwin being invited to Lance Bass’s house on Thanksgiving, but I’m banking on Drew Brees to figure out a way to put up points against Seattle’s remaining cornerbacks who have somehow avoided being placed in timeout.

Over/under 179.5 times you will hear the phrase “if the playoffs started today” uttered this week

Give it a rest already. I’m as much to blame as anyone else, but it’s not that important to spend three hours figuring out the sixth seed in the AFC. Besides, they wouldn’t start today. It’s midweek and if you know anything about football, playoffs always start on a Saturday in January. Duh.

In my defense, it may not be for harassment. I could just be looking for a place to stay, since Keenum and his mentor, Matt Schaub, have cost me a few mortgage payments over the last two weeks. I’m sure Andre Johnson would help me set up camp.

1/6 odds that either of these two undefeated college teams, Alabama or Ohio State, costs me on a money-line parlay this weekend

Do you get the feeling that the BCS is going to catch a break again? Auburn and Michigan will be ready.

@TheCousinSal If I saw Eli with that mustache in my neighborhood, I'm bringing the kids inside and calling the police. #tocatchapredator

Good call. I find that predators are relatively easy to catch so long as Eli Manning isn’t throwing them to you. [Tony Soprano’s “how dare you” voice.] Ohhhh!

@TheCousinSal You hated the Brees neck call. I’m guessing you were ok with it when it was called on Kiwi against Romo?

You guessed wrong. But Kiwi deserved to be penalized if only for walking around with such a silly name.

Tony Romo hates today bc the people of Dallas remember that hitting someone from 50yds is possible. #JFK @TheCousinSal

That does it @LyriCOLE1. You and I are having a fistfight behind the grassy knoll. Also, it was 88 yards, which makes your research as historically inept as the Warren Commission’s.

25/1 odds your uncle is ironically rushed to the hospital on Thanksgiving after choking on Cornflake, Pecan, and Marshmallow–Topped Sweet Potato Casserole while complaining about Obamacare

197,000/1 odds that anyone in the country says they’re grateful for the band Nickelback

5/2 odds I ruin my patio by knocking over the turkey fryer in anger after Ravens punt returner Jacoby Jones returns a punt 90 yards for a touchdown, killing my “first half under” play

Over/under 17.5 different YouTube videos surface over the weekend of women getting their wigs pulled off in a Black Friday melee

Speaking of Black Friday, last night on Jimmy Kimmel Live! the great Mike Tyson had a few poignant words on the event …

I’m happy to report that 93 percent of the staff went home with their ears intact.