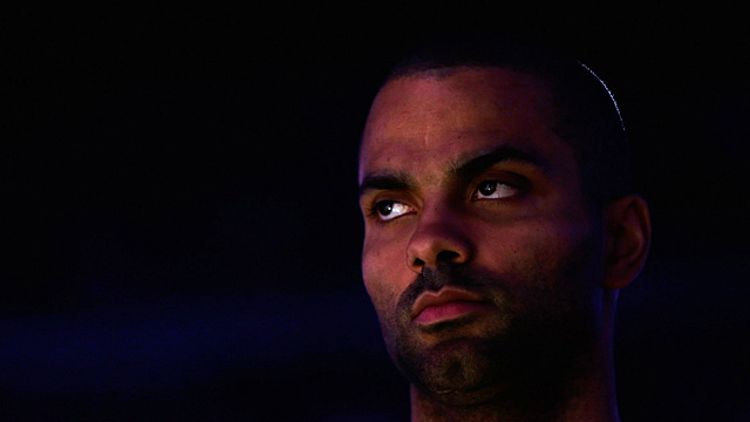 On February 13, the Spurs and Cavaliers were tied at 93 with about 15 seconds left in the game. Dion Waiters was dribbling near midcourt and about to make one of the biggest shots of his career. With just under 14 seconds left, Tristan Thompson set a screen on Kawhi Leonard near the top of the arc, enabling Waiters to advance the ball a little closer to the basket along the left side. As Waiters approached the left elbow, he lunged toward Tim Duncan, but quickly stepped back to create space for a long, off-balance 2-point shot. The ball left Waiters’s hand from about 20 feet out and went through the net with 9.5 seconds remaining. Despite not passing the ball once, the Cavs scored, the score was now 95-93, and Dion made this face: 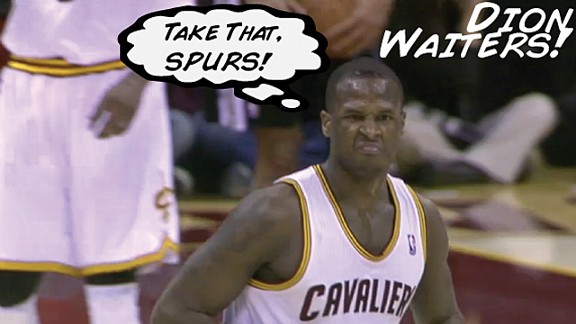 The Spurs called timeout. The Cavs used their foul-to-give, leaving the Spurs down two with 8.8 seconds left. Matt Bonner inbounded the ball to Tony Parker, who was guarded by Shaun Livingston about 10 feet beyond the top of the arc. Parker faked as if he were going to his right, but quickly went left instead, and a Tim Duncan Screen™ awaited. Duncan’s screen stopped Livingston dead in his tracks and forced Tyler Zeller to switch onto Parker. Tony then attacked, but Zeller held his ground. With 6.5 seconds left, Parker leapt into the restricted area with the ball in his hands, but Zeller was still in solid defensive position. 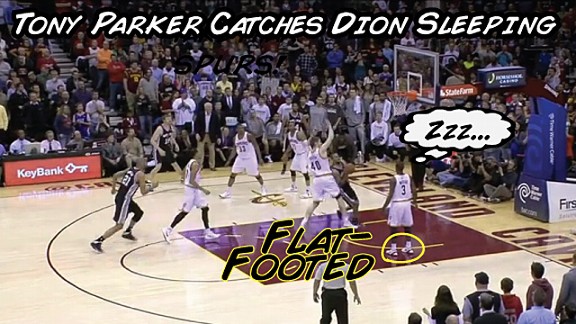 Unfortunately for the Cavs, one of their players was not in solid defensive position. Dion Waiters had collapsed in off of Kawhi Leonard, who stood wide open in the corner. In the split second he had to notice this and execute a perfect pass, Parker did both; he threw a strike over to Leonard in the right corner. 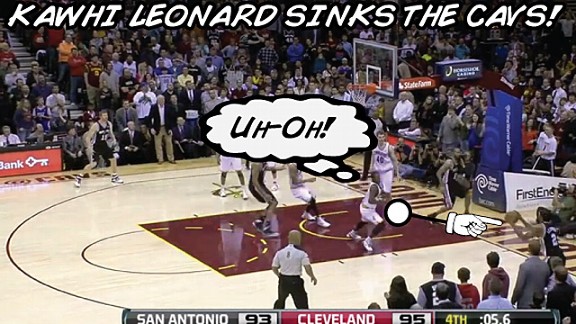 Leonard caught the ball with 5.6 seconds remaining, and by the time the clock showed 4.8, the game-winning 3 was already in the air. Waiters lunged frantically back toward the corner, but he could not overcome the court space he’d left between himself and his man. Despite his heroic jumper a few seconds earlier, it would be his defensive mistake that would make the difference in this game. After the shot went in, Parker exchanged a high-five with Leonard; nobody made any funny faces.

As the replay ran across the saddened Ohio televisions, Cavs play-by-play man Fred McLeod said, “You knew Parker was going to be the one to create it, and he made the right decision.” Parker attacked, detected a weakness, and exposed it. Because that’s what he does.

Fifty-eight games into the season, the Spurs once again have the best record in the NBA, and, once again, nobody cares. Night in and night out, they put on an offensive clinic that’s as fun to watch as any show in the NBA. Yet many NBA fans turn a blind eye. Once again, Tony Parker is the conductor of the league’s most dominant offense, yet most of us claim Chris Paul is the best point guard in the league. In a similar amount of minutes, Parker is averaging 21 points and eight assists per game while hitting 54 percent of his shots; Chris Paul is averaging 16 points and 9.5 assists per game while making 48 percent of his shots. The Clippers are having one of their best seasons ever, but they remain 4.5 games behind the Spurs. Despite being only 30 years old and having three rings and an NBA Finals MVP award, Parker remains the NBA’s invisible superstar.

It’s not that Chris Paul isn’t a great player — he obviously is — but so is Tony Parker, and too few of us seem to care. Not only is he running the league’s most successful offense, he’s got the best résumé and the best current stats of any point guard today. Parker excels at all of the classic point-guard chores. He’s the most active pick-and-roll point guard in the league, and perhaps the most efficient. Per Synergy Sports, when Parker is the ball handler in pick-and-roll situations, the Spurs average .98 points per possession, which is excellent. In fact, of players with at least 200 such possessions, only LeBron and James Harden are more efficient.

As a shooter, Parker is also extremely economical. He attempts 15.5 shots per game, but, on average, only one comes from beyond the arc, and usually those are in the corners. First and foremost, he’s an attacker who’s extremely effective in the paint; he uses the floater more often and more effectively than anyone. 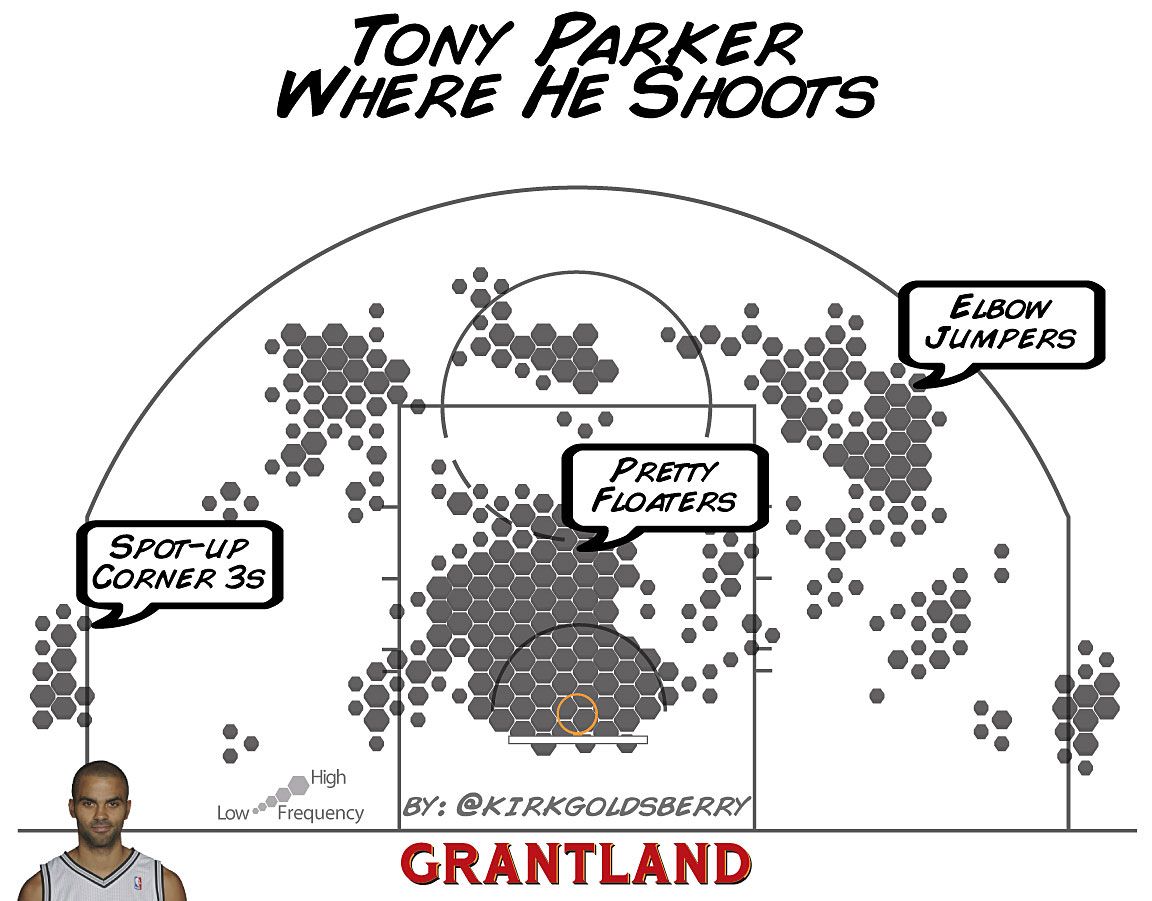 Parker’s shot charts reveal this attacking nature. He’s much more likely to shoot within 15 feet of the basket than he is to shoot long 2s or 3-point shots. He’s efficient in all the right places for his game: near the basket when he attacks, near the elbows where pick-and-rolls happen, and in the awkward spaces in between, where his patented floater enables him to score in a spot where most guards struggle mightily. 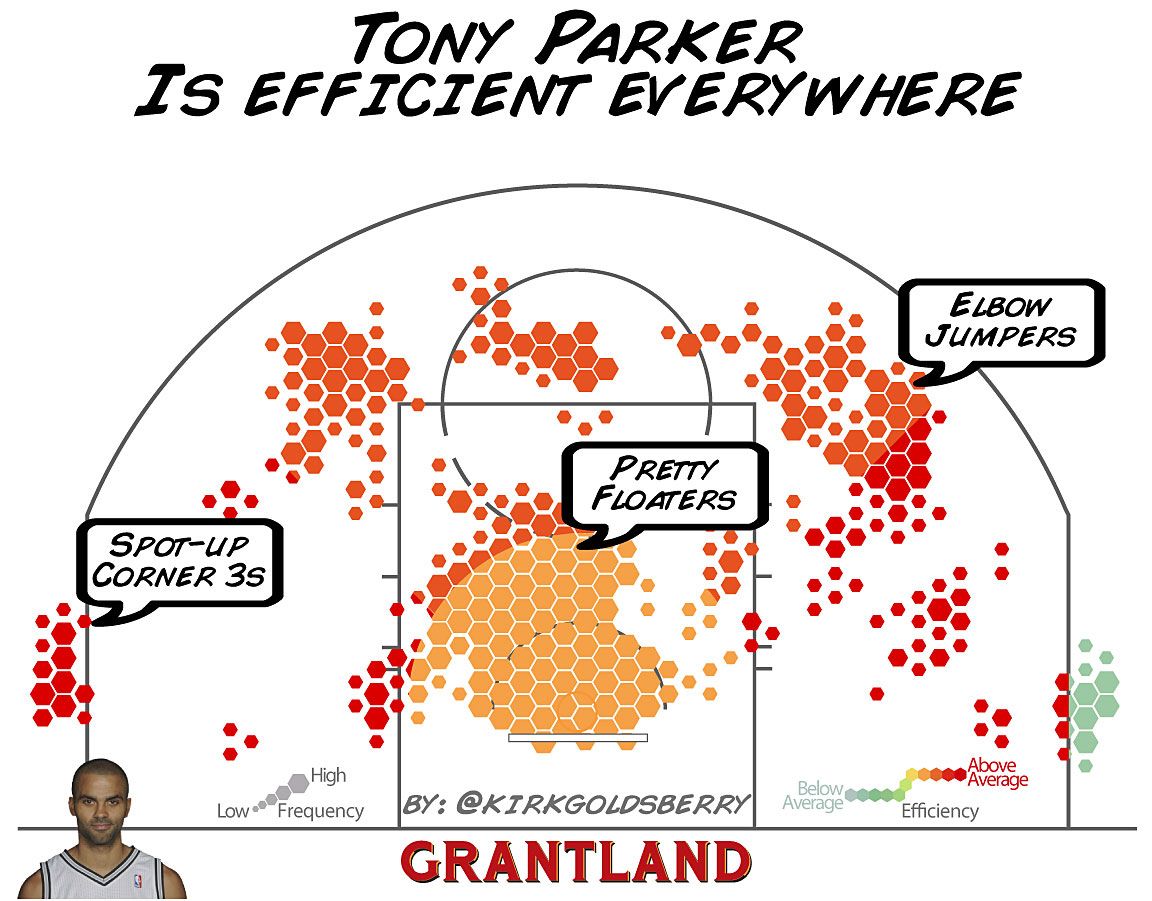 With Parker and Paul, we get caught up in arguing instead of appreciating. The facts are that both are a joy to watch, and both are great in different ways. Parker is perhaps the most efficient and fastest guard in the NBA with the ball in his hands. He’s also one of the best cutting guards in the league. But the thing that makes Parker special is his all-NBA brainpower; his ability to navigate defenses, survey his environment, identify opportunities, and repeatedly make the perfect decisions are his true gifts. These are the talents that created that game-winning play in Cleveland two weeks ago. Don’t get me wrong — his execution is also flawless, but there’s not a quicker or better decision-maker in the NBA than Tony Parker.